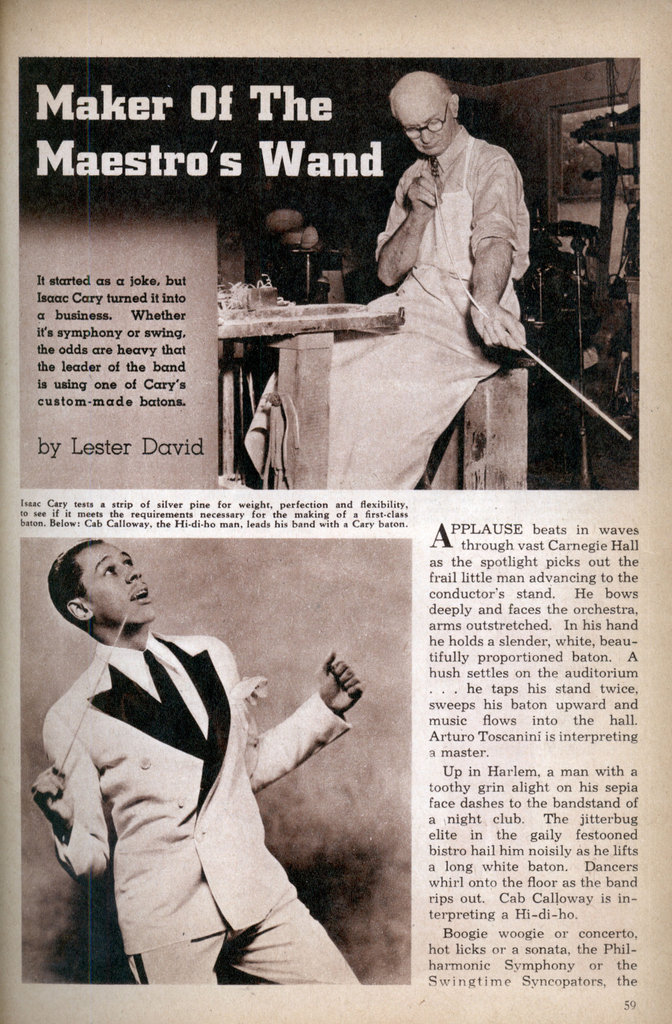 Up in Harlem, a man with a toothy grin alight on his sepia face dashes to the bandstand of a night club. The jitterbug elite in the gaily festooned bistro hail him noisily as he lifts a long white baton. Dancers whirl onto the floor as the band rips out. Cab Calloway is interpreting a Hi-di-ho.

Boogie woogie or concerto, hot licks or a sonata, the Philharmonic Symphony or the Swingtime Syncopators, the chances are that the man who leads as the musicians play is using a baton made by Isaac A. Cary in his factory out in Staten Island, N. Y. A tall man of middle years, with the smell of fresh sawdust clinging to him, Cary has been making batons for noted orchestra leaders for 12 years in his one-story factory.

When the late Hal Kemp was just beginning his rise to fame as a top-flight orchestra leader, he remarked to Cary who had made one of his infrequent visits to New York:

“I’m just as good as Vallee and Paul White-man now.” He held up a freshly made wand. “I use a Cary baton, too.”

And that’s how most orchestra leaders feel about the man who works with infinite patience in his tiny workshop. Great musicians swear by his sticks, speaking of them as one would speak of some great work of art. They wouldn’t think of using another’s product . . . not that there is any, for Cary is the only man in the United States who specializes in hand-made batons.

This shy craftsman with the expert fingers is not a little amazed by the attention focussed on him and his work. Through the years he has made well over 100,000 batons, an average of 10,000 a year, and even now he leans back at his workbench and wonders how it all happened.

It began as a joke 12 years ago. His son was playing trumpet in a small orchestra and often kidded his band leader about the bulky, unwieldy baton he used. He told him it was improperly made, that it was unbalanced and awkward to handle. In exasperation the leader said, “If you don’t like my baton, let’s see you make a better one.” Quickly the son answered, “Watch me.” He took the problem to his father and the two men set to work.

Cary had a good background for the task, having learned all about woodworking and the various types of lumber while in his teens. As a youth he worked in the forests of Pennsylvania and New England, felling trees and learning where the best lumber grows. From 13 to 21 he worked in lumber mills, absorbing information about grains, types of wood and quality. Then for 11 years he served as a machinist in Bethlehem, Pa., where he learned all there was to know about machinery. He didn’t realize it at the time, but his work in wood and machinery was but a prelude to the career he was to build of fashioning a thin sliver of wood.

Finding the proper type of lumber from which to carve this first baton was a task in itself. For weeks father and son experimented with all kinds, searching everywhere for one with the proper flexibility, weight, strength and resilience. They haunted lumber yards, examining woods imported from Japan and India, woods from California, Washington, Canada. And finally they decided on silver birch, the kind grown in Maine. Then followed days of laborious carving as the novice baton-maker neglected his machine shop to devote his time to the job at hand. Finally it was finished and the band leader was delighted. It wasn’t long before another order came in, then another and another … in a few short months the news spread and orders began pouring in and the business was launched.

“I woke up one morning,” Cary recalls, “and found I was in the baton business.” Today, among the noted leaders for whom he manufactures sticks are Abe Lyman, Rudy Vallee, Jimmy Lunce-ford, Toscanini, Rubinoff Frank Black, Alfred Wallenstein, and the entire WOR staff, Cab Calloway, Andre Kostelanetz, Paul White-man, Ozzie Nelson, Mark Warnow, and you name the rest.

It’s taken years of training but now the craftsman knows precisely how to go about making a baton.

He begins with a 36-inch piece of silver birch, one-quarter of an inch in diameter. The average sized baton is 23 inches in length but some go bigger, others smaller. Whiteman uses the largest, Toscanini the smallest.

Once he has determined the size wanted, Cary cuts the original stick to within an inch of the size desired and begins tapering it off with a hand plane. He works slowly, sighting down the shaft often until he is satisfied he has a reasonably smooth taper.

Next he inserts the wider end into a “revolver,” a device he invented himself, which whirls the wand at a speed of 5,000 revolutions per minute. As it spins he applies sandpaper to smooth the kinks. He has developed a sixth sense here which enables him to avoid a perfectly straight taper. For if it were precisely tapered, the slender shaft would whip and recoil, bending sharply when the leader brings it down with a snap. If the stick is a minute fraction of an inch out of alignment it comes down sharply and stays down. It’s Cary’s trick to get a perfect, yet imperfect, taper.

When this is completed to his satisfaction, a cork knot is glued to the handle and sandpapered smooth. The stick is then painted white with a pigment he mixes himselfâ€””the whitest white I could find”â€”and is hung to dry.

The novelty of Cary’s jobâ€”and the headachesâ€” come in when the orchestra leaders begin demanding different types of batons. Offhand you might say that a baton is a baton and how on earth could one differ so markedly from the other to make the slightest difference to a conductor? But they do. Each is a separate problem and must be solved in its own way.

Paul Whiteman, for instance, is a big man and wants a big stick which he likes to beat up and down sharply. So Cary and he put their heads together and from Cary’s shop came a peculiarly constructed, heavy handle designed to prevent the baton from springing from the Jazz King’s hand. His batons are 33-1/2 inches long and weigh three ounces. It’s difficult to believe but Whiteman uses about 100 each yearâ€”some are purloined by idolatrous jazz addicts, some are lost in the hurly-burly which usually accompanies moving of a large musical aggregation and others are broken when Paul cracks too lustily on the music stand in anger at some error.

Toscanini, on the other hand, uses a small stick 18% inches long and weighing 3/4 of an ounce. The cork collar is four inches long and narrow as Cary can possibly shave it, for the maestro dislikes a protuberance. A unique addition is a little green dot which Toscanini insists on having painted on the tip above the handle. His musicians have puzzled over the foible; even Cary doesn’t know. And Toscanini won’t explain.

Freddie Rich is a most destructive leader, breaking dozens each year by flinging them violently on the floor in a rage. He customarily carries dozens at a time. Mark Warnow, on the other hand, also uses a light stick but rarely breaks or loses one. “There’s no profit in Mark,” Cary says ruefully.

Before Cary makes a baton for a new customer he carefully investigates the size of the leader’s hand, the length of his fingers, his height and weight and then confers with him for hours to determine the exact type of stick best suited for him. He studies his method of conducting, whether he uses wide sweeps or narrow movements, and finally fashions a stick which takes all specifications into account. He keeps in constant touch with orchestra leaders and many serious consultations are held on the advisability of altering the markings by as little as 1/8 of an inch. Orchestra leaders are funny that way and Cary knows it.

There was the time he had been making batons for more than three years for a noted leader. The baton invariably was 22-1/2 inches long and weighed slightly more than 3/4 of an ounce. If the stick was a millimeter shorter or longer or weighed a tenth of a gram less Cary would receive a letter the next day telling him curtly of the error.

One day Cary decided to visit the conductor when he was playing a major date in New York. He had never seen the man actually at work before his orchestra and he was curious to observe how this most exacting gentleman led.

“My mouth just hung open,” he recalls, “when I saw him work for the first time. He came out with the baton in his hand, waved it at the audience a couple of times in hello, dropped it into a nearby chair and led the band through the entire program with his hands!”

But not all conductors are that way. Symphony men in particular demand precision for their batons, batons which they use.

“It’s more difficult to make batons for the symphony conductors,” Cary declares, “because there must be a delicate attack and release; lights and shadows must be created as the conductor indicates to each section of the orchestra exactly how he wishes the music played. If a baton is unevenly balanced or unwieldly for the conductor, the greatest music can be ruined.”

Cary’s cheapest baton is seventy-five cents, his most expensive rarely more than a dollar and a half. But there was the time he made a special baton for Andre Kostelanetz when the maestro was being tendered a dinner on the coast.

Cary hunted until he found lumber 75 years old, tough yet resilient. The baton was tall as “Kosty,” five feet two inches, perfectly proportioned down to the cork handle, and was inscribed with the names of all the notables at the party. It cost $100 and took the craftsman one month to carve.

Practically all the tools Cary uses, except his “revolver,” can be bought at the five-and-dime . . . sandpaper, a cheap plane, a file, cork, paint, glue. Try it some time.