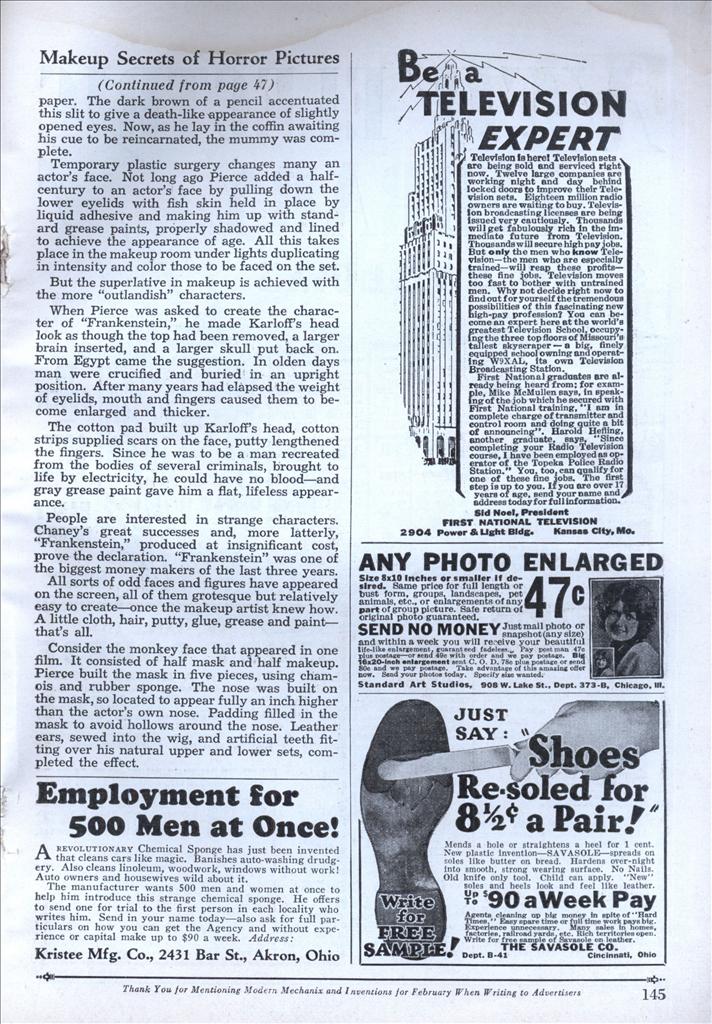 When you shudder at the sight of frightful characters in horror movies, it is usually the makeup man who is responsible for your thrills. Read here how he creates actors that terrify you.

FROM the depths of an ancient casket a bony and shriveled hand stretched back across history thirty-seven centuries to snatch a scroll from a terror-stricken actress.

Deep, gray lines of age streaked the hand. Dust fell from ancient fingers. Yet it moved, actually grasped the parchment, and disappeared from the screen.

Outside the camera angle sat Boris Karloff. It was his hand whose antiquity the camera revealed, a hand “mummified” earlier in the morning by Jack Pierce, movie make-up expert, who recently produced a living mummy in the person of Karloff, complete in 1500 feet of rotted cloth bandages, wrinkled skin, closed eyes and the yellow hair of a person dead many centuries.

The “mummy” represented the latest achievement of the movie make-up artists, who strive constantly for new and novel means of bringing striking figuresâ€”living and deadâ€” to the screen. On three different occasions Pierce turned Karloff into either a part or a whole mummy, counterpart of the first mummy ever created.

Few persons realize that mummy-making combined science and art among the Egyptians. Pierce searched thirty-five volumes of Egyptian history in his quest for authentic background for this bit of make-believe. “Who,” he asked himself, “was the first man mummified, what was used, how was he wrapped?”

All the information he could dig up gave only a suggestion, not a solution of Pierce’s problem in turning Karloff into a duplicate of Osiris for “Im-ho-tep,” in which picture the mummy comes to life. Manifestly embalming fluids and perfumes have no place in makeup for the camera, so for a month Pierce experimented with pigments, paints, drying materials. He had to have a rotted cloth that would not fall from the body, yet would crumble easily when the body stirred from its coffin. The face must look very old and withered and dry. The eyes must be closed, yet seem to see.

An assistant spent a week feeding double-weight cheese cloth in two widthsâ€”two and three inchesâ€”through a barrel-like cylinder over a gas flame, winding it gently over a turning wheel. This cooked and charred the cloth without actually burning it.

Pierce experimented with 20 dry colors until at last he looked down into his mixing pot on exactly the yellow-gray color with which good mummies are covered. Burnt umber, light umber, fullers’ earth, other colors, glue and hot water combined to produce this mud-like substance. With a little cotton and the standard make-up pigments Pierce was ready for the big jobâ€” a seven hour ordealâ€”of turning back the pages of time 3700 years, all for a five-minute effect on the screen.

“Wrapping Karloff,” Pierce told me, “was the hardest job I’ve faced during twenty years in the motion picture business. Cooking the cloth gave it the appearance of cloth that had rotted under the earth, but it had become so fragile that it sometimes fell apart in my hands.

“Yet it was necessary to wrap him in three directionsâ€”around, vertically and diagonallyâ€”so the layers would not separate and reveal his skin. Despite these three layers, when he opened his eyes and moved from his casket, the outer layer crumbled like a thick layer of caked mud and disappeared in a small cloud of dust.”

Caked mud really covered the bandages, having been brushed over the cloth. The glue held it together after it had dried, the water gave it the necessary moisture to permit working the colors. Yet the startling and grotesque effect came not so much from the decayed appearance of the body, as from the hands and face. Here was a triumph of movie makeup, as great as any ever attained by the immortal Lon Chaney,Pierce first brushed Karloffs face with a special gum, a secret formula, that retained its moisture so long as the makeup remained on the actor. Over the gum he plastered a thin layer of cotton, specially prepared for this type of work. After the cotton had “set” in the glue, with a pair of tweezers, Pierce pulled out the excess, leaving little valleys where he planned to create the lines of antiquity. Thirdly, another layer of gum was brushed on the cotton, this to hold the outside in exactly the same position as created by the tweezers.

While the face was drying under the hot blast of an electric heater and fan, Pierce turned to the hands. The same process served here.

Actor’s Face Made to Look Dead Having destroyed all life in the faceâ€”in fact, having quite obliterated its human resemblanceâ€”Pierce found he must restore something of a human quality. A layer of ordinary grease paint supplied an appearance of skin and normal pores and enabled him to deepen the lines in the cotton with a dark brown pencil. This accentuated the deep crevices.

Now a lighter shade of grease paint, spotted on the cheeks, brought out the high lights and depths so essential for the camera.

Technically the most difficult problem came in making up Karloff’s hair, for Pierce found he must turn the natural black into an aged yellow. No wig would do here.

A layer of liquid grease paint, neutral in color, supplied the base. On top of this was patted a mixture of facial beauty clay and fullers’ earth. All of which transformed the top of his head into a dirty matted yellow, exactly as the hair on mummies found in recent years looked after nearly forty centuries under the earth.

Final touches for such an exacting makeup are applied after the actor reaches the great sound stage. There Pierce completed wrapping Karloff’s legs together and sealed his eyes closed with rice paper, leaving a little horizontal valley in the center of the paper. The dark brown of a pencil accentuated this slit to give a death-like -appearance of slightly opened eyes. Now, as he lay in the coffin awaiting his cue to be reincarnated, the mummy was complete.

Temporary plastic surgery changes many an actor’s face. Not long ago Pierce added a half-century to an actor’s face by pulling down the lower eyelids with fish skin held in place by liquid adhesive and making him up with standard grease paints, properly shadowed and lined to achieve the appearance of age. All this takes place in the makeup room under lights duplicating in intensity and color those to be faced on the set.

But the superlative in makeup is achieved with the more “outlandish” characters.

When Pierce was asked to create the character of “Frankenstein,” he made Karloff’s head look as though the top had been removed, a larger brain inserted, and a larger skull put back on. From Egypt came the suggestion. In olden days man were crucified and buried in an upright position. After many years had elapsed the weight of eyelids, mouth and fingers caused them to become enlarged and thicker.

The cotton pad built up Karloff’s head, cotton strips supplied scars on the face, putty lengthened the fingers. Since he was to be a man recreated from the bodies of several criminals, brought to life by electricity, he could have no bloodâ€”and gray grease paint gave him a flat, lifeless appearance.

People are interested in strange characters. Chaney’s great successes and, more latterly, “Frankenstein,” produced at insignificant cost, prove the declaration. “Frankenstein” was one of the biggest money makers of the last three years.

All sorts of odd faces and figures have appeared on the screen, all of them grotesque but relatively easy to createâ€”once the makeup artist knew how. A little cloth, hair, putty, glue, grease and paintâ€” that’s all.

Consider the monkey face that appeared in one film. It consisted of half mask and half makeup. Pierce built the mask in five pieces, using chamois and rubber sponge. The nose was built on the mask, so located to appear fully an inch higher than the actor’s own nose. Padding filled in the mask to avoid hollows around the nose. Leather ears, sewed into the wig, and artificial teeth fitting over his natural upper and lower sets, completed the effect.