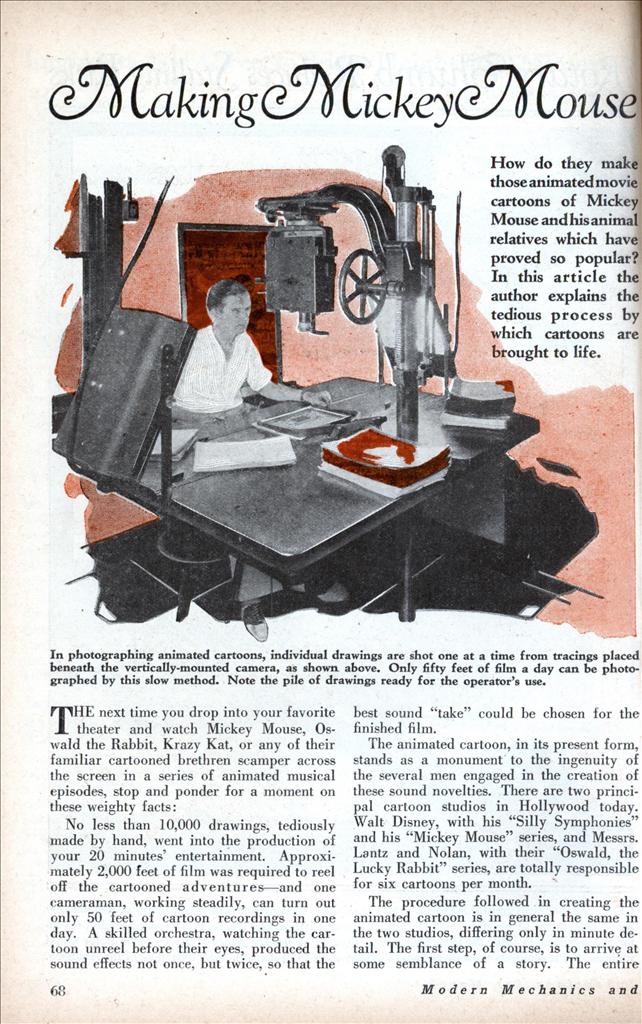 No less than 10,000 drawings, tediously made by hand, went into the production of your 20 minutes’ entertainment. Approximately 2,000 feet of film was required to reel off the cartooned adventures—and one cameraman, working steadily, can turn out only 50 feet of cartoon recordings in one day. A skilled orchestra, watching the cartoon unreel before their eyes, produced the sound effects not once, but twice, so that the best sound “take” could be chosen for the finished film.

The animated cartoon, in its present form, stands as a monument to the ingenuity of the several men engaged in the creation of these sound novelties. There are two principal cartoon studios in Hollywood today. Walt Disney, with his “Silly Symphonies” and his “Mickey Mouse” series, and Messrs. Lantz and Nolan, with their “Oswald, the Lucky Rabbit” series, are totally responsible for six cartoons per month.

The procedure followed in creating the animated cartoon is in general the same in the two studios, differing only in minute detail. The first step, of course, is to arrive at some semblance of a story. The entire cartoon staff of writers, animators, and illustrators, as well as the musical director participate in the gag meeting at which ideas for the cartoons are thrashed out. The musical director, who is the master of countless suitable melodies, plays appropriate music as the ideas develop and notes are kept on the music as well as story idea. After the main plot ideas have been elaborated to a sufficient degree, and all sound effects, gags, and musical accompaniment have been decided upon, the scenario is written. Everything which is to go into the cartoon must appear in the scenario. When completed, it is broken down into several parts, and given to the individual animators, each of whom is responsible for the drawings in his particular section. Each of these sections of the scenario is again broken down into particular sequences, each sequence being described fully upon a sheet which is known as the “Instruction Sheet”. Accompanying this “Instruction Sheet” is a sheet which is known as the “Exposure Sheet”, upon which all music and sound effects are indicated. It is from these sheets directly that the animator draws his individual scenes.

The fundamental principle upon which the motion picture projection machine is based is the phenomenon of persistency of vision. In brief, it is this: when the human eye is exposed to an object, and that object is quickly removed, the eye continues to view the object for 1/16 of a second after the removal. Thus if another object be quickly put into the field of vision, the two objects will be superimposed one upon the other. The motion picture consists of thousands of still pictures, each varying only in minute degree from its adjacent picture. When these pictures are projected upon a screen at the standard rate—that is, 24 pictures per second —the eye blends all of them into one harmonious whole, which appears to be a moving picture. The pictures exactly reproduce the action inasmuch as they were photographed in exactly the same manner-^ a series of still photographs individually exposed at the rate of 24 pictures per minute. The animated cartoon, instead of being photographs of actual people moving about, is a series of drawings, each individually made and then photographed upon the standard motion picture film.

To go back to the animators—after being given their sheets showing exactly what is desired in the cartoon, they begin upon the task of drawing the cartoon. Each drawing is made upon a sheet of white paper approximately eight by ten inches, and must show every detail of the picture upon each drawing. However, inasmuch as a good deal of the cartoon will take place upon one background, a separate background drawing is made, and then each action drawing has the background detail left out. The action drawings, of which literally thousands must be prepared, shows the progress of the action throughout the sequence. For instance, the mere act of raising an arm requires four to six separate drawings. Supposing the cartoon requires that Mickey Mouse must step up and kick the Black Bear. This little incident, taking almost no time upon the screen requires hundreds of drawings, each one showing the foot in a little more advanced position than the last. Thus it is that every scene, every foot of the cartoon must be drawn. There are sixteen drawings to the foot of finished film, and one cartoon requires from ten to twelve thousand individual drawings.

After the drawings have been made, they are traced upon sheets of celluloid of the same size, and inked in with India ink. This “work is done by girls, of whom there are sixteen in the Oswald studio. The background sheets as well as the action sheets are so traced. The two fit together in such a manner that when any action sheet is laid upon the background, a finished picture shows. These tracings are then photographed.

The camera assembly with which these tracings are photographed is arranged for the convenience of the camera man, for his task is at best tedious. Each tracing must be laid over its background, photographed, the film moved up one frame, and the pro- cedure repeated. The process is slow—it being possible to photograph approximately fifty feet of film per day. The camera is mounted above, shooting down upon a table. This table is equipped with a glass window, the light shining up through the window from below. Two pegs at the top of the window engage holes in the celluloid sheet to hold the drawings in place. Up to this point, the cartoon procedure follows that of the old silent cartoons. The introduction of sound has increased the difficulties and the effort required to create a cartoon many fold.

The music accompaniment, the sound effects, and what dialogue is necessary are all put onto the sound track at one time. Synchronizing these sounds to the picture is no easy task, and is done by the musicians. The finished cartoon, after final development and printing, is cut into short sequences, perhaps one hundred feet long. It is thus necessary to stop and re-record only one hundred feet of sound track in case of trouble, where if the whole cartoon were put through in one piece, a mistake would spoil many hundreds of feet of sound track. The musicians are trained especially in sound recording for cartoons, and the same orchestra does the work for every cartoon. These men are equipped with a variety of instruments which are effective in creating the necessary sound effects. Growls, squeals, and groans are made with special instruments which have been originated by studio technicians. The short sequence which is to be. recorded is projected upon a screen on the sound stage. The microphones and the recording machinery is so set up that the musicians can play for recording while viewing the action of the cartoon. Rehearsals are made which allow the musicians to become thoroughly familiar with every bit of action and synchronize their effects to it. For instance, when Oswald hits his rival over the head with a board, the loud ‘swat’ should be heard at just the right moment. When the rival groans, a ‘groaning noise’, made by one of the musicians is recorded. And so throughout the entire cartoon. Every sequence is recorded twice, for it is much cheaper to do that than it would be to call an entire orchestra back to the studio to remake a sequence which might have been spoiled either in recording or in the laboratory.

At this stage, the cartoon consists of separate sound and action—that is, the sound and action are printed upon separate reels of film —with two “takes” of sound corresponding to every scene of action. By special arrange- ment of projection machinery, it is possible to project the action upon a screen, and hear the sound through adjacent horns, the two reels running in synchronism. This is done in this case in order to choose the best “take” of each sound sequence corresponding, to the action. These “picked takes,” as they are called, are then patched together and the entire reel of sound is in synchronism with the picture. A point in contrast to the ordinary motion picture is that the cartoon requires no cutting—for just enough drawings are made to complete the reel, and each drawing is photographed in its final position in the reel. The last step in the process is a laboratory routine—-that of printing the action and the sound track upon one film. This prepares the cartoon for general theatre release.

The extraordinary popularity of the animated cartoon is due to the peculiar facility with which sound effects blend themselves to the type of action depicted in the cartoons. They are truly, in their present state, a result of the sound era of motion pictures.