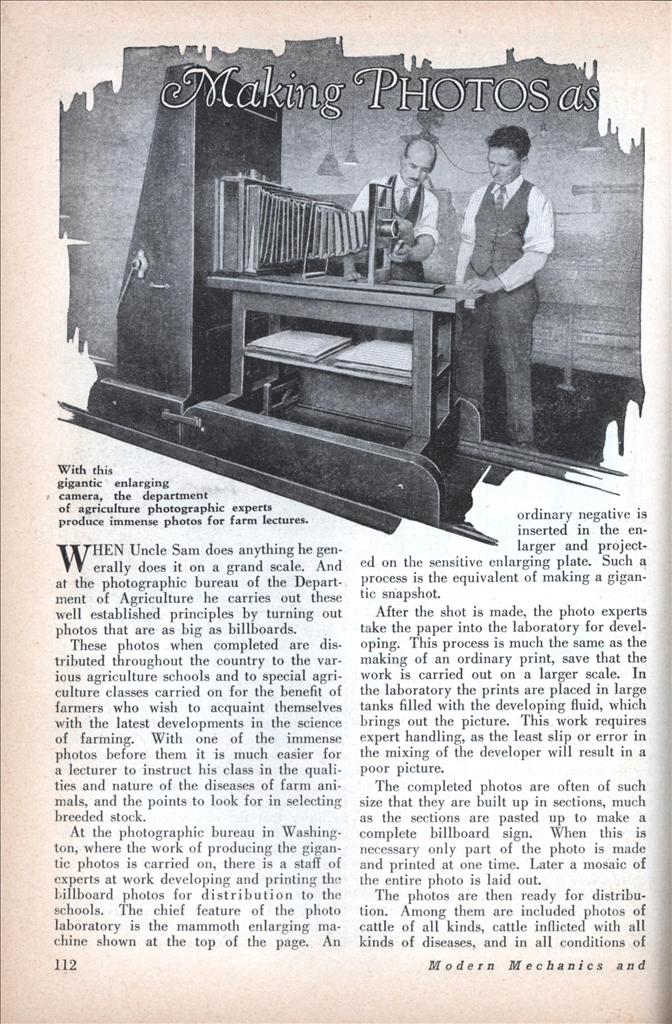 Making Photos as Big as Billboards

WHEN Uncle Sam does anything he generally does it on a grand scale. And at the photographic bureau of the Department of Agriculture he carries out these well established principles by turning out photos that are as big as billboards.

These photos when completed are distributed throughout the country to the various agriculture schools and to special agriculture classes carried on for the benefit of farmers who wish to acquaint themselves with the latest developments in the science of farming. With one of the immense photos before them it is much easier for a lecturer to instruct his class in the qualities and nature of the diseases of farm animals, and the points to look for in selecting breeded stock.

At the photographic bureau in Washington, where the work of producing the gigantic photos is carried on, there is a staff of experts at work developing and printing the billboard photos for distribution to the schools. The chief feature of the photo laboratory is the mammoth enlarging machine shown at the top of the page. An ordinary negative is inserted in the enlarger and projected on the sensitive enlarging plate. Such a process is the equivalent of making a gigantic snapshot.

After the shot is made, the photo experts take the paper into the laboratory for developing. This process is much the same as the making of an ordinary print, save that the work is carried out on a larger scale. In the laboratory the prints are placed in large tanks filled with the developing fluid, which brings out the picture. This work requires expert handling, as the least slip or error in the mixing of the developer will result in a poor picture.

The completed photos are often of such size that they are built up in sections, much as the sections are pasted up to make a complete billboard sign. When this is necessary only part of the photo is made and printed at one time. Later a mosaic of the entire photo is laid out.

The photos are then ready for distribution. Among them are included photos of cattle of all kinds, cattle inflicted with all kinds of diseases, and in all conditions of health. Not only are cattle photos made but also hogs, chickens, sheep and all kinds of farm animals.

The visual demonstrations made possible by these photos serve to enlighten students more adequately on the nature of cattle diseases and defects. Better cattle breeding is naturally the ambition of all progressive and scientific farmers. With one of these photos a scientific lecturer with a pointer can accomplish wonders in the way of instructing farmers.