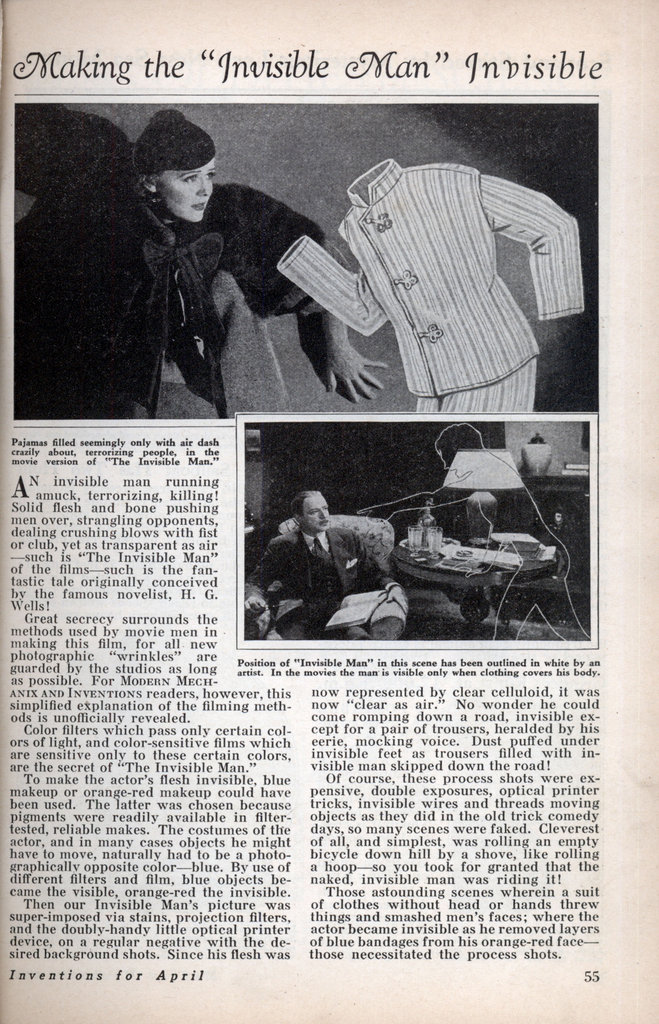 AN invisible man running amuck, terrorizing, killing! Solid flesh and bone pushing men over, strangling opponents, dealing crushing blows with fist or club, yet as transparent as air â€”such is ‘The Invisible Man” of the filmsâ€”such is the fantastic tale originally conceived by the famous novelist, H. G. Wells!

Great secrecy surrounds the methods used by movie men in making this film, for all new photographic “wrinkles” are guarded by the studios as long as possible. For Modern Mechanix and Inventions readers, however, this simplified explanation of the filming methods is unofficially revealed.

Color filters which pass only certain colors of light, and color-sensitive films which are sensitive only to these certain colors, are the secret of “The Invisible Man.”

To make the actor’s flesh invisible, blue makeup or orange-red makeup could have been used. The latter was chosen because pigments were readily available in filter-tested, reliable makes. The costumes of the actor, and in many cases objects he might have to move, naturally had to be a photographically opposite colorâ€”blue. By use of different filters and film, blue objects became the visible, orange-red the invisible.

Then our Invisible Man’s picture was super-imposed via stains, projection filters, and the doubly-handy little optical printer device, on a regular negative with the desired background shots. Since his flesh was

now represented by clear celluloid, it was now “clear as air.” No wonder he could come romping down a road, invisible except for a pair of trousers, heralded by his eerie, mocking voice. Dust puffed under invisible feet as trousers filled with invisible man skipped down the road!

Of course, these process shots were expensive, double exposures, optical printer tricks, invisible wires and threads moving objects as they did in the old trick comedy days, so many scenes were faked. Cleverest of all, and simplest, was rolling an empty bicycle down hill by a shove, like rolling a hoopâ€”so you took for granted that the naked, invisible man was riding it!

Those astounding scenes wherein a suit of clothes without head or hands threw things and smashed men’s faces; where the actor became invisible as he removed layers of blue bandages from his orange-red faceâ€” those necessitated the process shots.