If you just looked at the first page of this you’d think it was about BBQ. 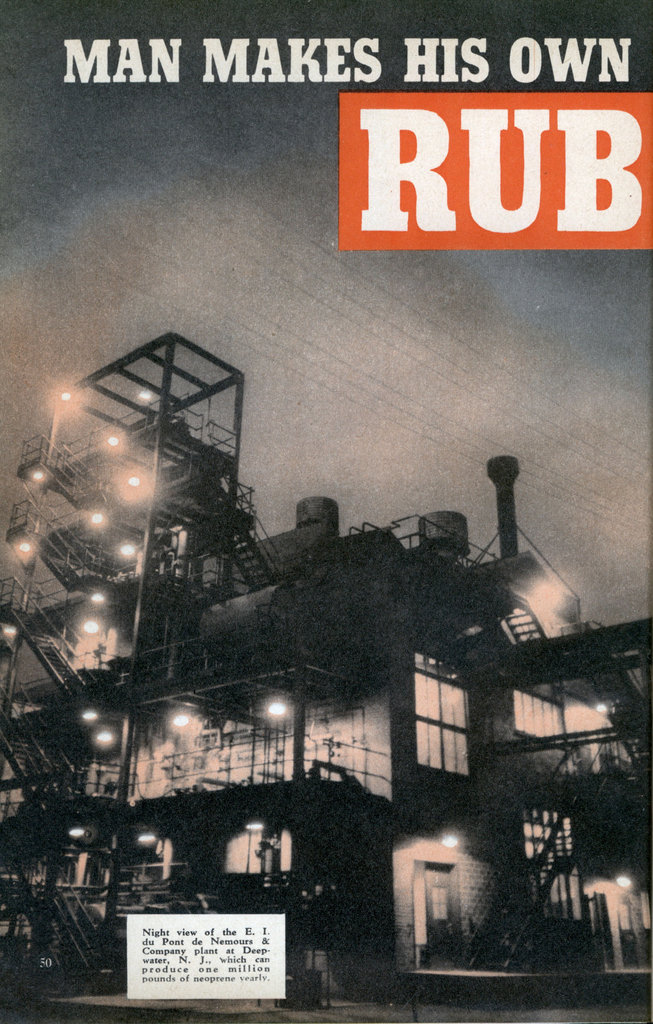 Man Makes His Own Rubber

THE diversified chemical manufacturing industry of America is finding a way to make this country free from dependence on foreign sources for an increasing number of vital raw materials. Only a few years ago, America depended on the nitrate beds of Chile for fertilizers and raw materials for industry. Today, it makes its own nitrates from the air.

Camphor was from time immemorial a natural monopoly of the Far East. Today, America makes its own synthetic camphor for medicine and the needs of industry. A large and increasing number of medicinaland other compounds, formerly imported, are now being produced here. And now rubber may be added to this list of essential raw materials.

Rubber is a vital element in our life. It is used not only for tires but for thousands of other products that are essential to our industrial civilization. More than ninety-nine per cent of the world’s rubber is grown in the tropics. Many attempts have been made to grow substitutes for rubber in the United States, but none has ever succeeded.

Millions of American dollars, British pounds, and German marks have been expended during the past fifty years in anattempt to produce a synthetic rubber; that is, a product identical with natural rubber made by chemical means, preferably fromraw materials that are freely available in these industrial countries. All of these efforts to produce a true synthetic rubber have met with failure. Germany, duringthe World War, did produce a synthetic product that was used as a substitute for rubber, but it was a very poor imitation of the natural product and consequently its production was dropped as soon as the war ended in 1918.

In 1925, research chemists of the du Pont Company began to work on the rubber problem, but they did not try to duplicate natural rubber as others had done. “Why,” they said, “should we assume that the product created by nature for an entirely different purpose is the best material for making the thousands of rubber products that modern industry requires? Why be content to reproduce in the laboratory the product that Nature has provided? Let’s start with different raw materials and produce a product that is even better adapted to present-day industrial requirements.” Among other things, they visualized a process for the production of arubber-like material from acetylene gas. The first experiments were quite disappointing, but help came from an unexpected quarter.

The chemical director of the du Pont Company attended the first symposium on organic chemistry which was held in Rochester by the American Chemical Society. At that meeting, Father J. A. Nieuwland of the University of Notre Dame told of the results of some of his experiments on the chemistry of acetylene. Father Nieuwland had been studying the gas and conducting research into its properties for many years and was recognized as the outstanding authority on its behavior from a scientific point of view.

His report told how he had succeeded in causing acetylene to polymerize, or, in plain words, to form giant molecules by combination of smaller molecules with one another. Acetylene when combined in this way became a different chemical entirely called di-vinyl-acetylene. That was something that the du Pont chemists had not tried. Arrangements were made to have Father Nieuwland’s experiments duplicated in the du Pont laboratories and an effort was made to convert this di-vinyl-acetylene to synthetic rubber, but it did not work. From di-vinyl-acetylene the chemists were able to obtain only the hard, brittle resins that Father Nieuwland had already produced.

The next step in the pursuit of a better lubber substitute was taken by a group of chemists who found that by changing theconditions that Dr. Nieuwland had used it was possible to convert acetylene to another chemical known as mono-vinyl-acetylene. It was hoped that a good artificial rubber could be made from this chemical, but again the experiments were unsuccessful.

The chemists who were working on this problem, however, refused to believe that it could not be done. They continued their work, and a few years later they found that by treating mono-vinyl-acetylene with hydrogen chloride gas they could produce a new channel which had never before been made and which they christened chloroprene.

Chloroprene is a volatile liquid; it certainly does not bear any resemblance to rubber. But the next and most startling discovery of all was that this liquid chloroprene can easily be converted to a tough, elastic solid. Imagine the elation of the chemists when they found that they had at last produced what chemists had been striving for so many years and had failed to find—an artificial product that is fully equal to natural rubber in strength, toughness and resistance to abrasion.

The first step in the manufacture of neoprene is to heat coal and limestone in an electric furnace, producing calcium carbide, designated by chemical symbols as CaC2. The next step is to add water to the calcium carbide and produce acetylene gas (C2H2)«There is nothing new about the manufacture of calcium carbide and its conversion to acetylene gas. Everyone who is old enough to remember the early days of the automobile will recall the acetylene generators that were usually mounted on the running board in which grayish lumps of calcium carbide were treated with water, producing the acetylene gas that was burned in the headlights. However, the next step in the manufacture of neoprene carries us into a new realm of chemistry. Acetylene gas is treated with a catalyst in specially-designed apparatus made of new corrosion-resisting alloys with the result that the acetylene molecules combine with one another to form a previously unknown chemical compound, mono-vinyl-acetylene. Mono-vinyl-acetylene, also a gas, is then put into another catalyst chamber where it is caused to combine with hydrogen chloride gas. The intermarriage of these gases produces another new chemical, chloroprene, which, strange as it may seem, is no longer a gas but a liquid.

The final step in this chain of chemical miracles is to subject liquid chloroprene to a polymerization process which causes the molecules to combine, producing a tough, rubber-like solid which is known as neoprene.

The perversity of chemical reactions is such that the materials being combined often tend to react not in the desired manner, but to combine in different proportions with the production of unwanted impurities or byproducts. The problem of the chemists and engineers who were charged with the responsibility of making this process work was to design equipment and methods of chemical control which would make the reactions follow the desired channels and produce neoprene having a maximum degree of strength, toughness and elasticity.

It was not an easy problem. The first special equipment designed for the job did not work satisfactorily. Changes were made and again the results were disappointing. The process was further modified and the result was more disappointments, but in the end the problem was solved and now in 1938—seven years after the first experimental factory was built—a huge chemical plant is converting millions of pounds of calcium carbide into neoprene. Apparatus and equipment unlike anything the chemical industry ever before knew made it possible for manufacturing chemists to direct these reactions in the desired channels, keep them under control, and produce an even better product than was originally made in the chemical laboratory.

Neoprene resembles natural rubber more closely than any other artificial product. The X-ray discloses that its physical structure is the same even though its chemical composition is different. It looks like crude rubber shipped from the rubber plantations and is mixed with other materials, processed, and vulcanized by rubber manufacturers just like the natural product. But although the finest articles look like those made of crude rubber and have the same elasticity, stretch and toughness, they, also have the ability to resist the action of oils, gasolines and solvents which destroy rubber. They resist heat, and direct sunlight does not cause them to check and crack so readily. They resist the passage of gases and have a much longer, useful life than like articles made from nature’s product.