This is another one of those “what will life in the future be like” articles. Like most of them the article gets somethings right and some stuff humorously wrong. For example we have increased the size of our food animals; however chickens still do not lay football sized eggs. War is unfortunately more vicious than ever and most people still do get up before 10. I particularly like the idea that scientists will pump ozone into the air, not to protect us from U.V. radiation, but to reduce crop yields. And while we do have a pill that will help you wake up in the morning, taking amphetamines for that purpose is still frowned upon.

Be sure to check out the little cartoon “day in the life” section on page three. 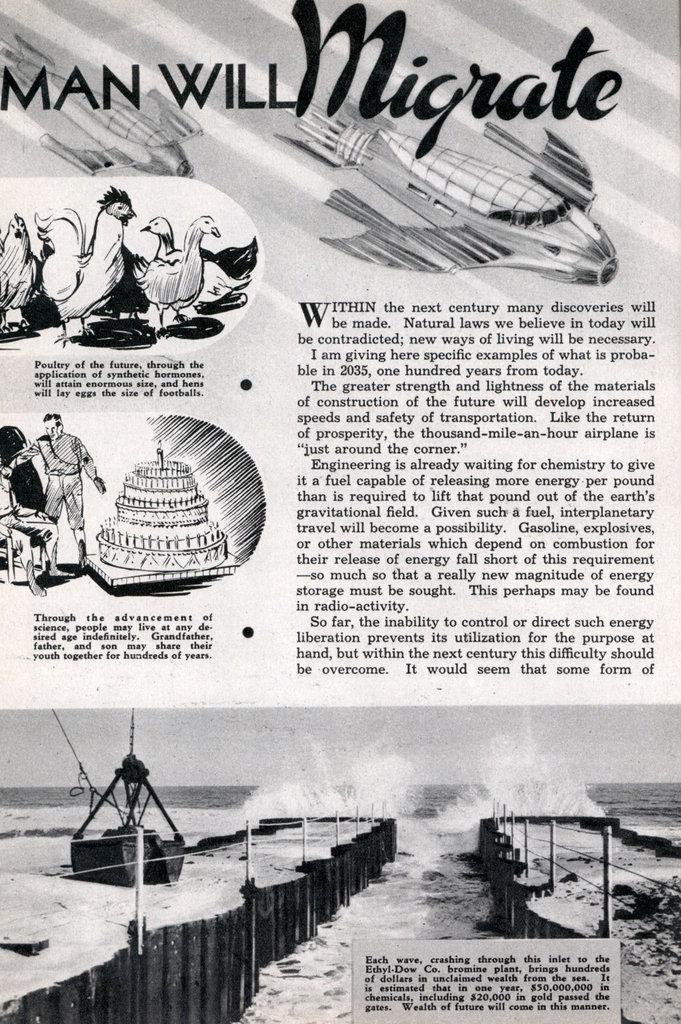 Man Will Migrate to Mars

Rocket ships flashing like meteors through the sky, life that defies time, wealth from the sea, animals ten times their present sizeâ€”these are but a few of the possibilities suggested by Thomas Midgley, in his predictions for the year 2035 based on the scientific developments of today.

WITHIN the next century many discoveries will be made. Natural laws we believe in today will be contradicted; new ways of living will be necessary.

I am giving here specific examples of what is probable in 2035, one hundred years from today.

The greater strength and lightness of the materials of construction of the future will develop increased speeds and safety of transportation. Like the return of prosperity, the thousand-mile-an-hour airplane is “just around the corner.”

Engineering is already waiting for chemistry to give it a fuel capable of releasing more energy per pound than is required to lift that pound out of the earth’s gravitational field. Given such a fuel, interplanetary travel will become a possibility. Gasoline, explosives, or other materials which depend on combustion for their release of energy fall short of this requirement â€”so much so that a really new magnitude of energy storage must be sought. This perhaps may be found in radio-activity.

So far, the inability to control or direct such energy liberation prevents its utilization for the purpose at hand, but within the next century this difficulty should be overcome. It would seem that some form of synthesis of elements (or their equivalent) of the proper active type would be the logical line of attack. Be this as it may, the major premise is that within a century the chemist will offer to the engineer a “fuel” capable of releasing in useful form more energy than will be required to lift itself through the earth’s gravitational field. This, in a short while, will result in making interplanetary transportation possible.

I should not care to give the impression that interplanetary transportation will become commonplace immediately. Considerable preparation of environment will be necessary. Mars will need water, Venus a new atmosphere; all of this will mean work for the future chemists and engineers and, after all, why should we not leave something to be accomplished in the century after next?

The distortion of economics which exists at present in agriculture makes it difficult to interpret properly the future of chemistry in this field. I have heard this economic distortion described as a condition wherein we grow more corn to raise more pigs to make more fertilizer to produce more cotton to plow under. Such a condition is so contrary to the established rules of progress that it cannot continue very long.

If I am wrong in this belief and crop curtailment continues as a permanent necessity, I feel justified in making the following prediction: The chemist will eliminate the bureaucracy by increasing the amount of ozone in the earth’s atmosphere, thereby limiting the ultraviolet radiation available for agriculture to the amount required.

The direct synthesis of the carbonâ€”hydrogen bond from carbon dioxide water, and sunlight will become an accomplished fact. Such a development will take place on swamp and submarginal lands where the basic raw materials are as readily available as elsewhere and will result largely in the production of organic raw materials for further synthesis in the chemical factory.

In the field of animal husbandry great changes will result from the application of synthetic hormones to promote growth. This will make possible a much greater and more rapid meat production from a given amount of foodstuff. In other words, a century hence, chickens will be the size of pigs and lay football sized eggs, hogs will be the size of cattle, and bulls will be mastadons; yet the food consumed will be no greater than that used at present.

Expected future events under health are multitudinous. A few of the more obvious are as follows:

The understanding of the chemistry of cancer and its resulting control.

The elimination of cold and influenza epidemics by a knowledge of the basic chemistry involved.

The exposure of the chemistry of the teeth, leading to a relatively simple and effective hygiene for their proper preservation.

The end of tuberculosis, diabetes, septicemia, and a host of similar afflictions by a fuller knowledge of the chemical factors involved and so on.

What greater hope may be held out to suffering humanity than such predictions as these, and yet they are nothing more than extrapolations of well-recognizable trends.

The control of the age cycle will become an accomplished fact by introducing certain new organic compounds into the human system. Thus an individual would be able to order an indefinitely long life (except for accident) at any given age level he or she may choose, such as thirty to thirty-five or eighteen to twenty-two. If this prediction is extended to the year 3035, I shall include the statement that by that time, Methuselah’s record will have fallen.

As to war, the effectiveness of high explosives has been greatly reduced by the chemically made smoke screen, and toxic gases are rendered harmless by a canister of active charcoal. And thus may we expect the trend to continue.

Should the next century see the extension of the principal of humane offensive weapons (which already has been introduced by the use of tear gas) to include contact anesthetics or temporary paralysis-producing compounds, just as certainly will a defensive antidote be developed. Or should some archfiend succeed in producing an offensive device of such potency that entire populations may be eradicated, thereby fulfilling the dream of many pacifists that war will become too horrible for any nation to wage it, just as certainly will some genius arise and discover a means to render this device innocuous. Such considerations lead to the conclusions that, irrespective of what chemistry may contribute to warfare, during the next century, the determination of victory will remain where it has always beenâ€”in the hands of the men with the knives.

Knowledge Will Be Concentrated

Sometime within the next century, the revolution which is now going on in physics will come to an end. This will be characterized by a majority of physicists agreeing upon the nature of the physical universe and remaining in agreement for a reasonable period of time. Following this very desirable event, a man or group of men will appear in chemistry who will recodify its laws in much the same manner as was done by Mendeleef and Willard Gibbs. This will make it simple and easy for the student to cover much more ground in a given time than is now possible.