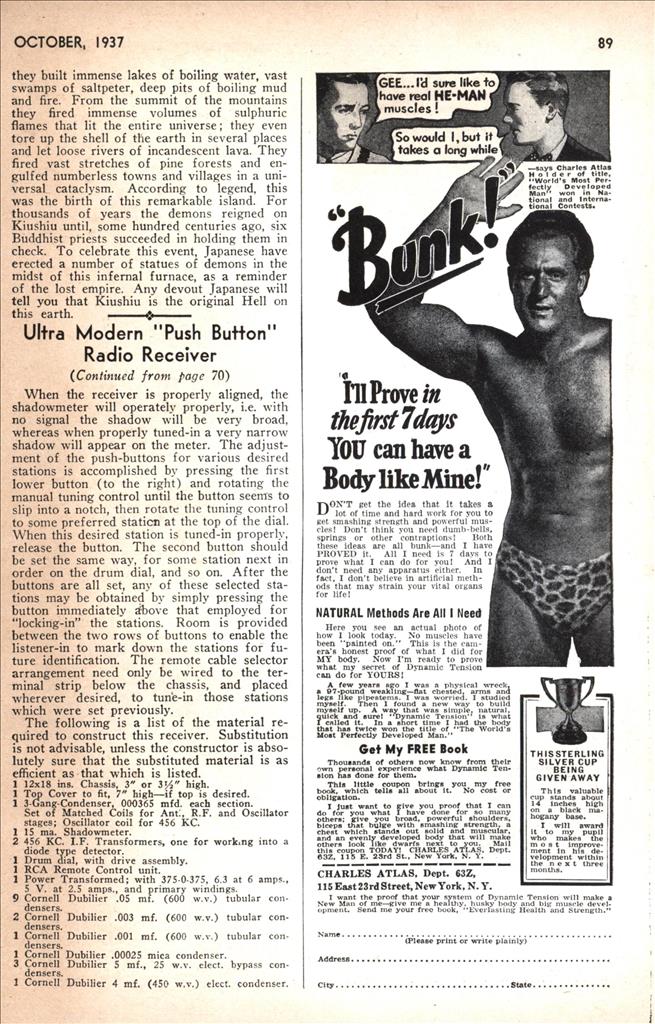 Natural lakes of boiling water, spitting sulphuric flames, boiling mud, and incandescent lava, furnish the settings for a group of hideous demons which are worshipped even to this day.

NOT long ago a group of French explorers came across a small group of islands off the southern tip of the Island of Kyushu or Kiushiu, Japan. Although there is nothing new about the existence of these islands, the average student knows little of their history.

Like the famous Alaskan “Valley of Ten Thousand Smokes,” the Island of Kiushiu vomits sulphuric gases mixed with boiling water, hot mud, brine, lava and suffocating vapors—in fact, it is as veritable an inferno as was described by Dante, yet Dante never heard of Kiushiu.

What makes these islands differ from other volcanic islands, or volcanoes found elsewhere in the world, is that Japanese legend holds that Hell was created by their god on this spot. Although this legend harks back to remote ages (in fact many thousands of years before Christianity came into existence), its belief still persists to this day.

According to modern scholars, belief in the existence of a Hell, which the wicked are calculated to enter after death, first originated in Persia. The Zoroastrians believed that life continued on after death, but under circumstances vastly different from those on this earth. Furthermore, contrary to the accepted belief of today, Hell was intended for the rich and powerful, for they were the real transgressors and persecutors of the poor. The common man was not good enough to live in Hell. This belief was also held by the Greeks and Romans.

The old Zindavesta (Zoroastrian Bible) tells of Hell and Paradise, the former ruled by the god Ahriman, the evil doer, and the latter by Ormuzd, the god of good. Ormuzd and Ahriman had a quarrel (no reason is given for quarrel) and their offspring divided into two opposing forces to the extent that no peace was to be declared as long as the Earth and Heaven existed. Many centuries later, Jewish eschatologists were greatly influenced by this faith, which, in course of time, was adopted by them, and eventually by the Christians.

But the question scientific research workers are trying to determine is how did the Japanese get hold of this religious thought, or did the Persians contact with Japanese and import it to their own country?

The answer has not yet been found. One thing is certain—there is a great similarity in both religions. It also seems that the Japanese practiced Shintoism long before Hebrew religion was born.

In Japanese Shintoism, Oni, the god of evil, is described as an ugly and hideous being who rules the inferno of Kiushiu. Here all wicked people were punished. A graphic picture of Oni is also given in Jap- anese legend. It says, “he is a person with flat face, wide mouth stretching from ear to ear. On his head, he has a pair of stout short horns. He is nearly naked, his toes and fingers are three in number with sharp pointed nails. He has the ability to walk about the world and fly in the sky; in his right hand he always carries an iron rod with short pointed spikes.” (See Dante’s “Inferno.”)

The Occidental civilization was introduced into Japan only a little more than a half century ago. However, this did not modify their ancient customs and manners. Most of ancient beliefs of Mikado’s subjects persist to this day; particularly is this true of their religious legends, which have been kept alive throughout the empire and have shown no desire to sway to imported religions. They have never given up rendering homage to gods of Shinto-ism, Buddhism and Confucianism, whom they worship as the representatives of the beauty of nature.

The fairy-tale story of the Island of Kiushiu—the original home of the empire of the demons—is also upheld. When the irate gods cast off the demons, the latter selected this place for their permanent seat of government and in which to punish the sinners. Here they built immense lakes of boiling water, vast swamps of saltpeter, deep pits of boiling mud and fire. From the summit of the mountains they fired immense volumes of sulphuric flames that lit the entire universe; they even tore up the shell of the earth in several places and let loose rivers of incandescent lava. They fired vast stretches of pine forests and engulfed numberless towns and villages in a universal cataclysm. According to legend, this was the birth of this remarkable island. For thousands of years the demons reigned on Kiushiu until, some hundred centuries ago, six Buddhist priests succeeded in holding them in check. To celebrate this event, Japanese have erected a number of statues of demons in the midst of this infernal furnace, as a reminder of the lost empire. Any devout Japanese will tell you that Kiushiu is the original Hell on this earth.