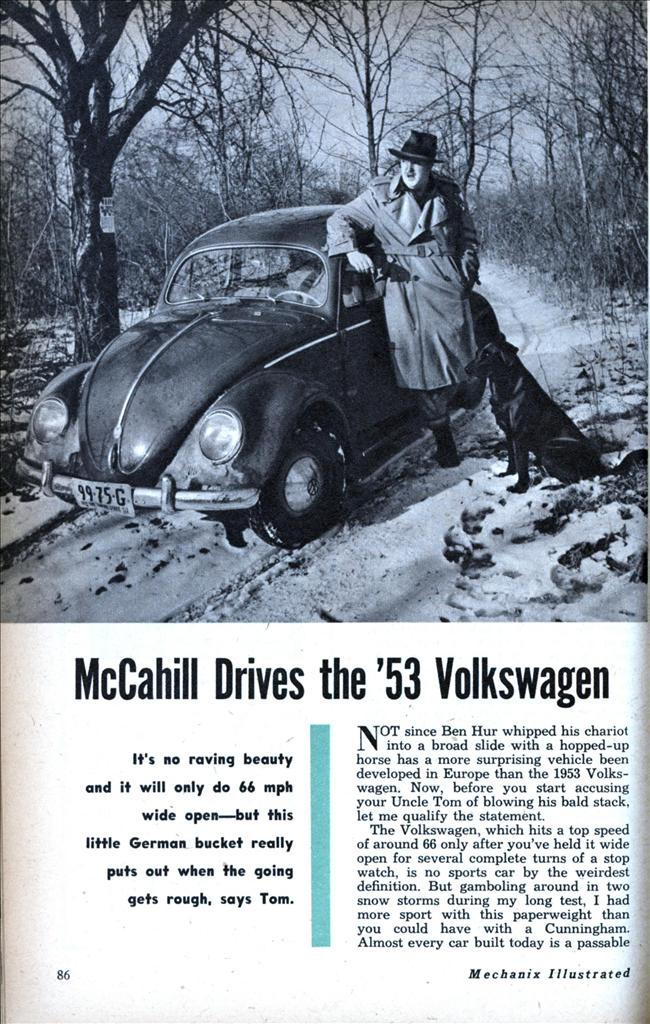 It’s no raving beauty and it will only do 66 mph wide open—but this little German bucket really puts out when the going gets rough, says Tom.

NOT since Ben Hur whipped his chariot into a broad slide with a hopped-up horse has a more surprising vehicle been developed in Europe than the 1953 Volkswagen. Now, before you start accusing your Uncle Tom of blowing his bald stack, let me qualify the statement.

The Volkswagen, which hits a top speed of around 66 only after you’ve held it wide open for several complete turns of a stop watch, is no sports car by the weirdest definition. But gamboling around in two snow storms during my long test, I had more sport with this paperweight than you could have with a Cunningham. Almost every car built today is a passable fair weather friend but when the going gets rough I’d sooner be behind the wheel of a Volkswagen than most cars I can think of.

Late in the afternoon of New Year’s Eve, in a snarling near-blizzard, Jim McMichael and I headed out of New York in a Volkswagen for my home in the New Jersey mountains. Before going 25 miles we found cars stalled and others skidding hopelessly as they tried to assault the simple rises of a dual super-highway. The Volkswagen weaved through these churning iron hulks like a broken-field runner. The heater was giving us Palm Beach weather inside the little cab while outside all hell was cutting loose.

The car hits the scales at 1,600 pounds and six-foot-four McMichael and myself topped 500 on our own. This meant roughly that it was carrying a third of its total weight in passenger load under tough conditions. As soon as I found clear spots where no other cars were fighting for traction, I deliberately threw this car into skids several times to see how it would act. Our big passenger weight, contrary to popular belief, was not helpful in giving the car traction and only helped throw it somewhat off balance.

When McMichael and I finally got to my home hill we found we were breaking fresh tracks in inches of snow for over a mile of hard climbing. On my test curve I almost lost the car for the first time. I hit the corner too fast on purpose and the tail of this little rear-engine job started heading for the woods. Rear engine cars act almost the opposite of front-engine cars under these circumstances and barreling for control is not the best way out of a rear slide. I took my foot off the gas instantly, the slide stopped and the car was on course again. John Fitch told me that he had a few close squeaks last summer at the Nurburg Ring when he raced a rear-engine Porsche. He said that on one or two occasions during the race he took a curve a little too fast and the rear started to slide off course. To get it back at once (unlike conventional driving, which requires throttle) he took his foot off the gas and the Porsche got back in line in an eye blink.

After our drive home from New York, the snow in the mountains continued and the roads were all but impassable. Just after midnight (sober) I made my first 1953 test, before the year was an hour old. Jim and I warmed up the little German splutter-box and headed for the hills. If Max Hoffman, who loaned me the car for the test, could have seen us I’m sure he’d have called for a couple of good head doctors.

After a few miles of ordinary snow-ploughing on the deserted main highway, we headed for some real tough stuff where the roads are hazardous even in July. Frankly, we both expected to get stuck. But the fantastic way this little pumpkin seed plowed through spots where angels were taking snow checks made us try and find the Volkswagen’s point of no return. I started up a two-mile mountain trail, where the snow was unbroken even by a rabbit, and while the bright Bosch headlights bored a hole through the swirling snow and darkness the Volkswagen dug in and went up like a puff of smoke. This left only one challenge locally, an impossible one—my regular half-mile hill climb with its maximum 28 per cent grade. For laughs, over we went and found the road covered with a good seven inches of snow, with ice underneath.

Wondering how I was going to back down, we hit the climb, throwing snow off on either side like a speed boat. So help me, if there were just ten more horsepower of guts in the little four-cylinder pancake engine we would have made it in second gear without stopping. As it was just 30 feet from the top— and well past the steepest grade—the engine died and I dropped down into first. Leaving it in first gear, I let it just grind away at partial throttle. Inch by inch, gradually wearing away the snow and ice under the rear wheels, the little Kraut clamshell worked ahead. We did some side-sliding in this last 30 feet but a little steering wheel correction now and then kept it on course. It took close to five minutes to make those last 30 feet— but make them we did.

I realize that many of you will think this part of the article as queer as a fur six-dollar bill, never having driven a rear-engine job in snow. Though unbelievably slow, our progress up the hill was steady and uninterrupted. There were no signs of tire burn or over^ heating. The car just went up inch by inch in first gear until we were on more level ground, then picked up in normal fashion.

About a week later, the East got whacked with an ice storm that did millions of dollars’ worth of damage. Trees and branches were all over the road and all my mountain utilities, including light and telephone, went out. My wife and I had a dinner date some miles distant that we couldn’t break as we had no way of phoning, so off we went in the Volkswagen, picking our way through a mass of hot power lines. On our return, very late that night, things had got much worse. The windshield was icing up (due to the poor location of the car defrosters, off to the side instead of being in the middle) and we found all our regular routes home blocked by fallen trees. This meant playing blind man’s bluff, in total darkness on sheet ice and in deep snow, trying to find an open lane or path to get us back home. I was glad I was in the Volkswagen instead of the MG.

The VW’s visibility is so much better than the MG’s when the roadster’s side curtains are up (a must in such weather) and the headlights are so far superior to the MG’s United States-legal sealed beams that comparison is ridiculous. These Volkswagen lights (you must change them in many states and you can guess why) picked out fallen wires in their beam long before I got dangerously close. After riding nearly 50 miles to cover a normal 15-mile distance, we finally got home safe and sound and warm just as dawn was breaking. We had gone over roads and hillsides that no American car I know of could have travelled that night. And the experience had given us a real affection for this unlovely little beetle.

I first tested the Volkswagen several years ago and was only mildly interested. It was fair weather and under these circumstances the car struck me as just a nice, homely little turtle that ran well, steered easily and cornered like a pool table on casters, just as a lot of other imports did. It took a real snow-and-ice storm for me to fully appreciate just how good the Volkswagen is. The new 1953 car has a swell four-speed synchromesh transmission you can play as easily as a garden hose. The ride over rough roads is phenomenal. So help me, I’d swear under oath that this German oil can sops up tough bumps and chuck holes as well as, if not better than a Fleetwood Cadillac, even though its four-wheel suspension makes it surprisingly bow-legged when the car is jacked up.

Outside of a few minor faults, such as the bad location of the defrosters, I have only one or two more complaints. The front seats are poorly anchored and they are so placed that if you have any more shoulders than a piece of spaghetti you will find them pushing uncomfortably against the window. The ignition lock and key is a ring-tailed dilly. Unless you happen to be Jimmy Valentine’s father, you will find it almost impossible to get the key in the slot at night without a light, due to some weird serations on the lock. The choke on the car I tested was about as useful in cold weather as a raincoat on a duck. When the temperature falls to around zero and you need a choke the most, the wire freezes so hard that Hercules Ziloh the Bayonne Strong Boy couldn’t yank it out. When you finally do get the car going by hand-choking at the carburetor, it thaws out quickly and works fine.

Okay, you ask, how is its Fourth of July performance? It’s okay, period. Top speed is 66. Zero to 30 takes 7.9 seconds, zero to 40 goes 15.3. Zero to 60 takes a long 42.1. The car averages close to 50 miles on a gallon of regular gas and there is enough storage room to carry a winter’s supply of clothes for two people, using the back seat and a sort of storage bin behind that. Under the front hood next to the fuel tank there is enough room to store a weekend supply of shirts and cigarettes.

The Volkswagen is rated a four-passenger job and I drove it with four in the car, including Joe (in the back bin). But Uncle Herman, my honest relation, would spin in his grave like a pea in a whistle if I said my long-legged wife, sitting behind me, was comfortable. Four Singer Midgets, yes. Four jockeys, maybe. Four average-size guys, impossible. This is a good two-passenger job with two emergency seats for people with flat legs.

In summing up, the Volkswagen has an air-cooled pancake engine that is proving itself as reliable as the sun. The car makes » no effort at all to be stylish. It has absolutely functional looks that were not designed to be chic but to appeal to people more interested in transportation at low cost. The paint job and general trim are excellent. A close examination of even the smallest details, such as the wiring and heating system, will prove at a glance that regardless of price this is a quality automobile from one end to the other. I strongly recommend the Volkswagen to anyone interested in this type of car, for at the price (approximately $1,400) there is nothing better built in the world and few that are half as good.—Tom McCahill.