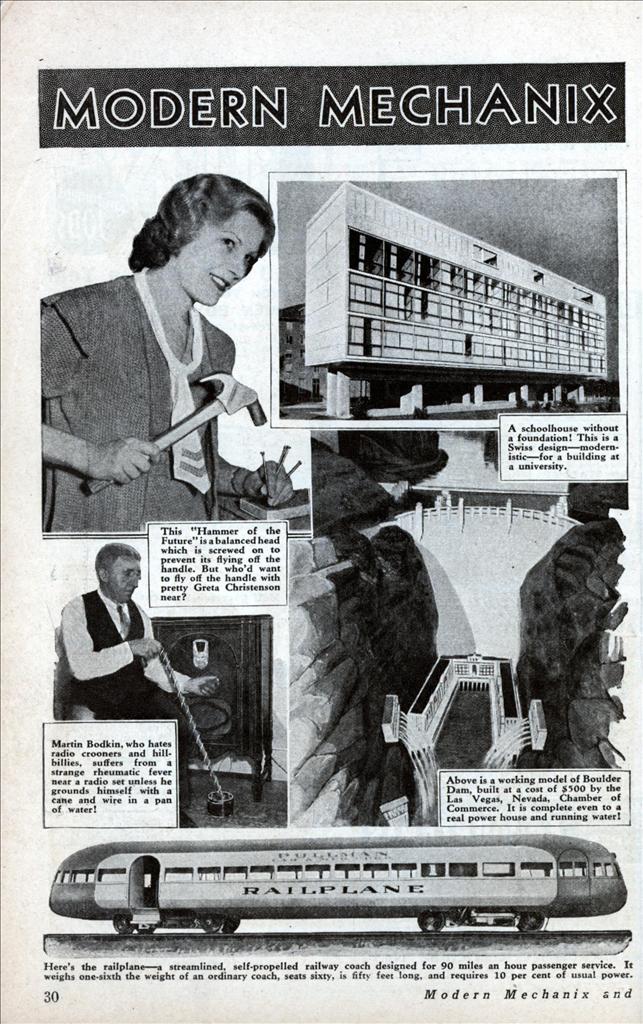 MECHANICAL NEWS of the Month

Pictured here are the latest news shots of developments in the world of science, engineering and plain home mechanics. Each thirty days sees a galaxy of new ideas which our alert cameramen catch for your enlightenment, instruction and amusement.

This “Hammer of the Future” is a balanced head which is screwed on to prevent its flying off the handle. But who’d want to fly off the handle with pretty Greta Christenson near?

Martin Bodkin, who hates radio crooners and hillbillies, surfers from a strange rheumatic fever near a radio set unless he grounds himself with a cane and wire in a pan of water!

A schoolhouse without a foundation! This is a Swiss design—modernistic—for a building at a university.

Above is a working model of Boulder Dam, built at a cost of $500 by the Las Vegas, Nevada, Chamber of Commerce. It is complete even to a real power house and running water!

Here’s the railplane—a streamlined, self-propelled railway coach designed for 90 miles an hour passenger service. It weighs one-sixth the weight of an ordinary coach, seats sixty, is fifty feet long, and requires 10 per cent of usual power.

Introduced by a German Sanitary engineer in Dresden, this practical bath tub for apartment dwellers is an idea American manufacturers should get busy on.

Pauline Campbell, pretty 18-year-old Venice, Calif., beachcomber, really combs a mean beach 1 She pays her way through high school by sifting the sands at Venice and recovers many valuables.

Alan Gould, Associated Press sports editor, is shown above in the press tent off the Kenwood golf course at Cincinnati, Ohio, demonstrating how the United States amateur and other golf tournaments are now being covered. Sports reporters following the play speak directly into a short wave transmitter to give a play by play report of the meet. Plays arc recorded as they happen, eliminating delays by messengers. Gould writes the running story without seeing the tourney.