This magazine was published the same year King Kong was released. I wonder if this is one of the masks from the movie? 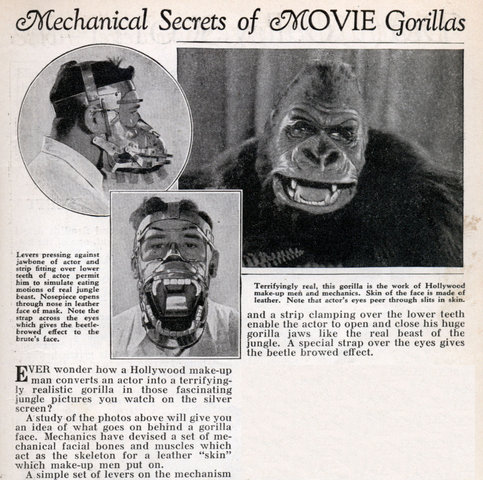 EVER wonder how a Hollywood make-up man converts an actor into a terrifying-ly realistic gorilla in those fascinating jungle pictures you watch on the silver screen?

A study of the photos above will give you an idea of what goes on behind a gorilla face. Mechanics have devised a set of mechanical facial bones and muscles which act as the skeleton for a leather “skin” which make-up men put on.

A simple set of levers on the mechanism and a strip clamping over the lower teeth enable the actor to open and close his huge gorilla jaws like the real beast of the jungle. A special strap over the eyes gives the beetle browed effect.