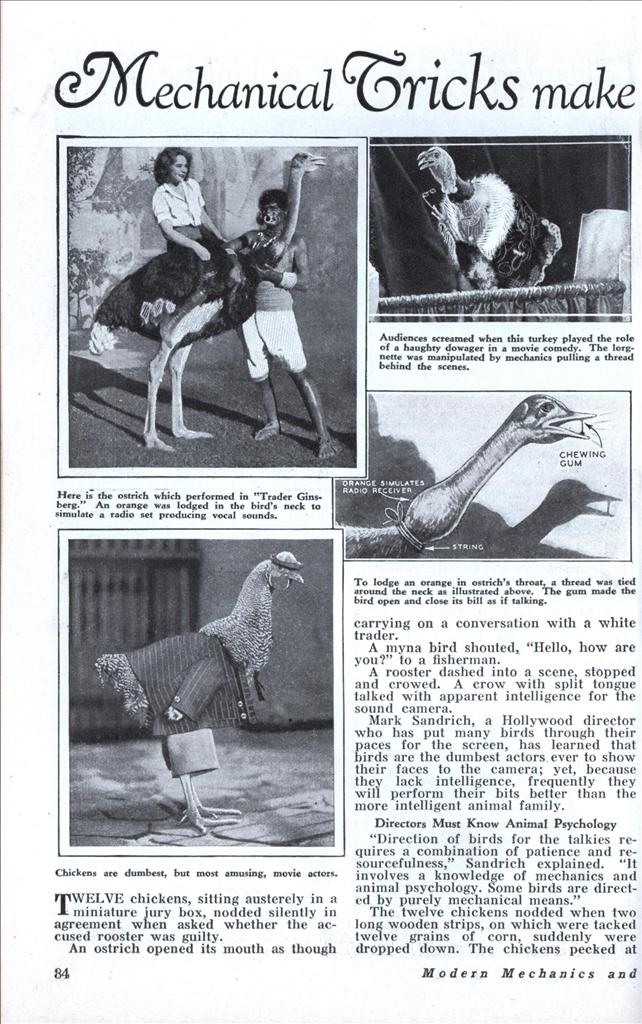 TWELVE chickens, sitting austerely in a miniature jury box, nodded silently in agreement when asked whether the accused rooster was guilty.

An ostrich opened its mouth as though carrying on a conversation with a white trader.

A myna bird shouted, “Hello, how are you?” to a fisherman.

A rooster dashed into a scene, stopped and crowed. A crow with split tongue talked with apparent intelligence for the sound camera.

Mark Sandrich, a Hollywood director who has put many birds through their paces for the screen, has learned that birds are the dumbest actors ever to show their faces to the camera; yet, because they lack intelligence, frequently they will perform their bits better than the more intelligent animal family.

Directors Must Know Animal Psychology “Direction of birds for the talkies requires a combination of patience and resourcefulness,” Sandrich explained. “It involves a knowledge of mechanics and animal psychology. Some birds are directed by purely mechanical means.”

The twelve chickens nodded when two long wooden strips, on which were tacked twelve grains of corn, suddenly were dropped down. The chickens pecked at the corn. Others are cued by surprises.

“The Australian magpie,” said Sand-rich, “is the most intelligent bird with which we work. Yet its criminal tendencies make it a difficult subject. The magpie, like the myna bird and the parrot, can be taught to repeat sounds; and, as the parrot ‘talks’ with no intelligent knowledge, so with the other ‘talking’ Chickens, the director has learned, can be made to pose by stroking the back of their heads. Roosters enliven scenes with plenty of action. Ducks and geese are “plain dumb.”

And an ostrich once provided some of the funniest bird scenes ever recorded. Sandrich was directing “Trader Ginsberg” and wanted the ostrich to swallow a tiny radio set, about the size of an apple; but the set must lodge half-way down the bird’s neck.

How Ostrich Was Made to Talk Here’s how it was worked: The director cut an orange square to represent the radio, tied a thread around the bird’s throat about half-way down and permitted the bird to reach down with its beak and swallow what appeared to be the radio set.

The orange stuck at the prescribed point. Now, the bird must open and close its beak as though words flowing through the radio actually were emitted by the bird itself.

Glue, stuck in the top of the bird’s bill, failed when the ostrich swallowed it. Spirit gum similarly failed. Then a wad of chewing gum stuck inside the upper-bill accomplished the result, and the ostrich “talked” during a long scene.