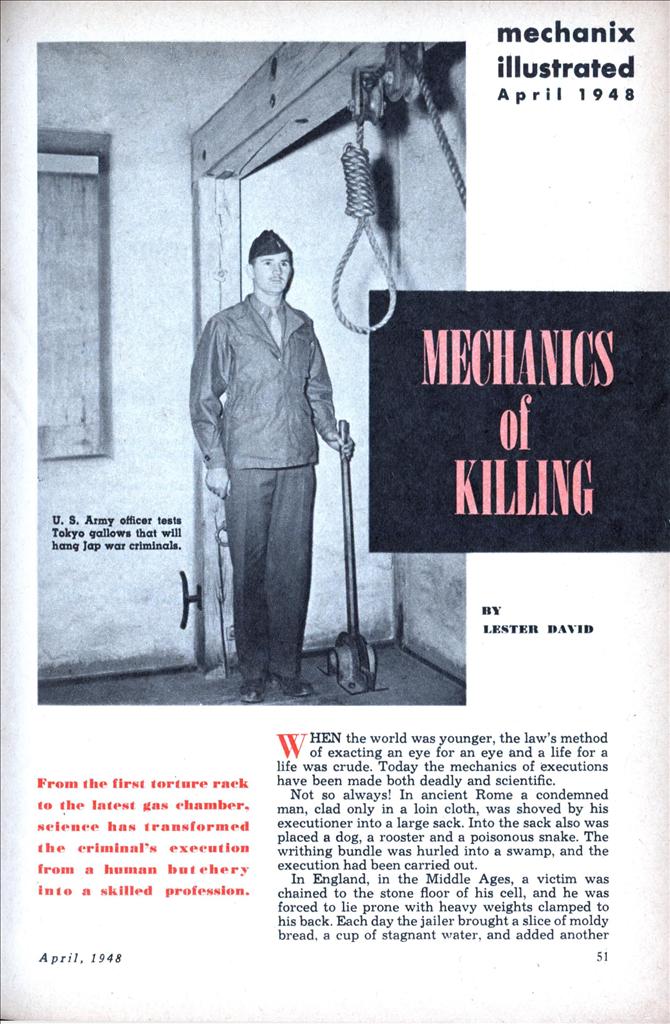 From the first torture rack to the latest gas chamber, science has transformed the criminal’s execution from a human butchery into a skilled profession.

WHEN the world was younger, the law’s method of exacting an eye for an eye and a life for a life was crude. Today the mechanics of executions have been made both deadly and scientific.

Not so always! In ancient Rome a condemned man, clad only in a loin cloth, was shoved by his executioner into a large sack. Into the sack also was placed a dog, a rooster and a poisonous snake. The writhing bundle was hurled into a swamp, and the execution had been carried out.

In England, in the Middle Ages, a victim was chained to the stone floor of his cell, and he was forced to lie prone with heavy weights clamped to his back. Each day the jailer brought a slice of moldy bread, a cup of stagnant water, and added another weight. The bread and water got smaller in quantity each day. The weights grew heavier. Finally, the wretch died.

For centuries the unfortunates who incurred the death penalty were broken on the wheel, boiled in pitch, drawn and quartered, impaled on pickets, hurled onto sharp rocks from steep cliffs, burned at the stake, torn to pieces by red-hot pincers or buried alive. Scientific execution has replaced the torture death in the modern democratic state. Today the men who carry out the state’s sentence of death are skilled craftsmen, whose goal is swift, merciful execution by scientific instruments.

Take the science of hanging, which now requires intricate mathematics and hair- split planning for a technically flawless job. A sudden snap must break the neck cleanly; there must be no mutilation or slow strangulation, proof that the execution has been bungled.

In the 17th and early 18th centuries hanging was a crude affair. Someone tossed a rope over the gallows. One end of the rope was hastily knotted in a noose which was slipped around the victim’s neck. Then the man holding the other end of the rope jerked the victim into the air.

Even this was an improvement over a still earlier hanging method. In this case, the condemned man was forced to stand up in a horse cart while the noose was yanked down over his neck. Suddenly the horses were whipped. The man fell off and choked to death as the cart-pulled rope dragged him over the ground.

Not only has the modern state perfected the actual act of hanging, but it has done much to bolster the victim’s morale before execution. Many states have done away with the old-fashioned gibbet which stood menacingly in the prison courtyard. Formerly the prisoner had to walk a long “last mile” and march up the wooden steps to the gallows. Now the victim simply walks a few feet from his cell onto a hidden trapdoor.

The mechanics of hanging calls for close attention to the rope, the noose and the exact distance of the fatal drop through the trap.

If the condemned man twirls or spins at the end of the rope, or if he gurgles, gasps, draws up his knees or convulses in spasms, the hangman has muffed his job, for these indicate that the man is dying of slow strangulation. In this case, he may stay conscious for as long as 20 minutes.

On the other hand, if there is no sound or motion and only a gentle swing on the end of the rope, the criminal has died quickly of a broken neck. And this time the hangman knew his craft.

The rope itself is probably the most important single tool of the hangman’s trade. Hemp is almost universally used. It gives a sharp snap when jerked taut, and it’s this snap which breaks the neck and severs the spinal cord. The hangman must soap-stone his rope and keep it in a cool, dry place to retain its freshness. Most executioners use a 13-foot piece of five-strand, 3/4-in. Italian hemp with ten twists. A fiber rope does not stretch and therefore is never used. Each execution requires a new hemp rope, because the snap lessens markedly after the first hanging. Thus, in the official photographs of the Nuernberg hangings each dead Nazi is shown lying with his own rope around his neck.

The most vital task of the hangman is to calculate the correct “drop.” If the victim falls too far, the rope will cut the neck or even sever it. If he doesn’t drop far enough, the rope merely binds tight about his neck and slowly chokes him to death. (See Table page 52.) In figuring the drop, many factors must be considered— the weight of the victim, the size of his neck, the strength of the muscles and the bones. The hangman makes a minute study of the condemned the day before execution and consults the prison doctor’s records. The hangman may even enter the criminal’s cell to examine him personally.

In Spain the garrote is still the traditional way to execute criminals. It has been greatly improved since its first use in the Middle Ages, however. Formerly, the executioner twisted a cord or bandage around the victim’s neck by means of a garrote or “cudgel” until he strangled. Later, the mechanical collar and other innovations to quicken death were adopted.

The victim now sits upon a post or stool and leans against a heavy stake. Attached to the stake is an iron collar, which the executioner clamps around the victim’s neck. The executioner tightens the collar by turning the heavily weighted levers fastened to a big screw. The collar itself has an upper and a lower ring, and as the screw turns, the upper ring is drawn toward the stake while the lower is pushed away, creating a “scissors” action. If the executioner adjusts the double collar on the victim so that one of the rings presses on one vertebra and the other on an adjoining one, the executioner can turn the screw rapidly and thus dislocate the spinal column. The dislocation kills the criminal immediately.

In another widely used version of the garrote, there is a sharp blade in the rear of the collar. When the executioner turns the screw to tighten the collar, the blade slices into the neck and causes instant death.

Execution by beheading, however, reached its peak, scientifically as well as numerically, with the guillotine during the French Revolution. For swift and sure beheading, the guillotine has never been surpassed.

Although it is commonly believed that the guillotine was born during the revolution in France, the Scots had a similar device almost two centuries before. As in the guillotine, a blade moved in grooves set in an upright frame. Dubbed “The Maiden,” the Scottish device was used for nearly a century before being discarded.

The French machine, suggested by Dr. J. I. Guillotine for the speedy execution of anti-revolutionists, improved upon the crude “Maiden.” This improved model still is used in France today.

The guillotine consists simply of two upright posts, topped by a crossbeam grooved to guide an obliquely bladed knife. The back of this big knife is heavily weighted, and the blade “chops” down swiftly when the executioner releases the pull rope.

Without a guillotine, beheading is one of the most difficult executions to perform. There are many cases on record where the headsman had to make up to adozen strokes before he finally succeeded in beheading his victim.

In England, before beheading was cast aside, the executioner used either a huge two-handed sword or an axe, the head of which was eight inches wide at the blade and about a foot long. Sometimes the condemned man simply knelt and lowered his head, a method the Japs still use. More often, though, a chopping block was added.

This usually was a long piece of timber with foot-high supports at each end. A small log of wood was fastened across the upper end, on which the neck was laid. During Queen Elizabeth’s reign, a low, grooved block was commonly used to hold the victim’s neck in the proper position. The victim lay on the ground with his neck resting on the block. Other types forced the condemned person to kneel while the executioner’s assistant tied victim’s hands to the sides of the block.

As the scientific age began in the twentieth century, a strange thing happened. Humaneness, up till then unknown where the death penalty was concerned, was introduced into executions. Science now sought to make killing more expert for the state and more merciful for the condemned.

After many experiments and tests, the electric chair finally was adopted to replace hanging in most of our states. Here was a way of meeting death that took advantage of man’s new knowledge of electricity. Naturally, there is a lot more to electrocution than merely throwing a switch.

Before the date set by law, the executioner, who must be a trained electrician, gets data on the victim’s exact physique so that the electrodes will fit perfectly. This must be done as close to the day of execution as possible, since condemned men often start shriveling away as they await their doom.

Unlike the hangman’s rope, the electric chair is always the same. It is made of stout oak and has eight straps by which the victim is bound at the chest, the waist, each upper arm and each ankle.

At the death signal, the guards step back. The executioner throws the switch to the maximum voltage, usually 2,000. After five seconds, he decreases the voltage to 1,000 to prevent sparking and unnecessary burning. He holds the current at 1,000 for 30 seconds, then steps it to 2,000. He repeats this alternate increasing and decreasing of the current for four or five successive shocks, and then the doctors examine the body and pronounce the death of the criminal.

Electricity enters the body through two electrodes, one on the head and the other on the right leg. To get perfect conductivity, these parts of the body are shaved, and a sponge soaked in brine is placed between the electrodes and the flesh.

After the electric chair had been in operation for some years, man continued to cast about for even more humane methods. The next major step in the technical progress of killing was the lethal gas chamber, now the legal method of execution in eight states: Arizona, California, Colorado, Missouri, New Mexico, North Carolina, Oregon and Wyoming.

The gas-chamber victim is bound hand and foot to a straight-backed chair in a sealed chamber, while the official witnesses observe through windows. A two-gallon jar of sulphuric acid and water stands at the side of the chair. At a signal, the executioner cuts a string outside of the chamber and releases about ten one-ounce “eggs” of cyanide of potassium. As the “eggs” plummet into the jar, clouds of death-dealing gas immediately arise.

The victim breathes once, twice.

Man thus has learned to temper justice with both humanity and science. For science, which has given man a far better life than he has ever enjoyed before, also has given a better death to the condemned criminal. •