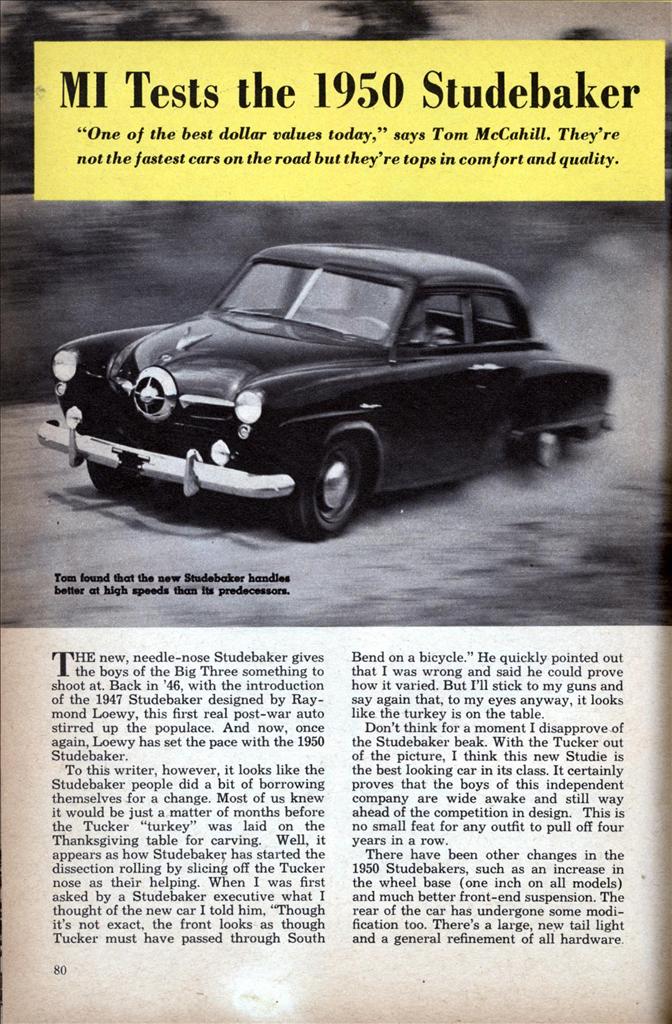 “One of the best dollar values today,” says Tom McCahill. They’re not the fastest cars on the road but they’re tops in comfort and quality.

THE new, needle-nose Studebaker gives the boys of the Big Three something to shoot at. Back in ’46, with the introduction of the 1947 Studebaker designed by Raymond Loewy, this first real post-war auto stirred up the populace. And now, once again, Loewy has set the pace with the 1950 Studebaker.

To this writer, however, it looks like the Studebaker people did a bit of borrowing themselves for a change. Most of us knew it would be just a matter of months before the Tucker “turkey” was laid on the Thanksgiving table for carving. Well, it appears as how Studebaker has started the dissection rolling by slicing off the Tucker nose as their helping. When I was first asked by a Studebaker executive what I thought of the new car I told him, “Though it’s not exact, the front looks as though Tucker must have passed through South Bend on a bicycle.” He quickly pointed out that I was wrong and said he could prove how it varied. But I’ll stick to my guns and say again that, to my eyes anyway, it looks like the turkey is on the table.

Don’t think for a moment I disapprove of the Studebaker beak. With the Tucker out of the picture, I think this new Studie is the best looking car in its class. It certainly proves that the boys of this independent company are wide awake and still way ahead of the competition in design. This is no small feat for any outfit to pull off four years in a row.

There have been other changes in the 1950 Studebakers, such as an increase in the wheel base (one inch on all models) and much better front-end suspension. The rear of the car has undergone some modification too. There’s a large, new tail light and a general refinement of all hardware All four fenders are individually bolted on, so that in the event of a minor crash, an entire new side is not required. Today, this is a feature well worth considering. The horsepower has also been jacked up. Taking everything into consideration, the new jobs are better cars than previous models. And, as most Studebaker fans know, there was very little wrong with them before.

The dash or instrument board is several inches further forward than in the past. Incidentally, the Tucker dash was way forward too. Enough of this small talk, though, let’s drive the car!

Undoubtedly the unhappiest man in South Bend was Bill Ay res of the Studebaker public relations staff on the day I arrived. Usually, I drive to the factories for tests but this time I elected to go by rail. My train pulled into South Bend just after six in the morning and there was poor Ayres, waiting to greet me. We discussed company plans and particularly Studebakers version of the automatic transmission which will make its debut on the Commander and Land Cruiser in early 1950. Then we made arrangements for me to test these cars in California next winter. Until then, I have sworn to make like a sphinx. So for now, back to little needle nose.

We drove to the 850-acre proving ground, one of the best in the country. I was offered my choice of cars, all thoroughly broken in. I selected the four-door Champion which is the low man on the Studebaker totem pole.

Before I had made more than two laps of the three-mile track, I realized the new Champion has a lot more punch and handles much better at high speeds than its predecessors. The horsepower has been raised to 85 from the former approximate 80 and this has made a considerable difference.

Improved performance was also noticeable when I drove into tough curves at 80 mph and got around without any effort. This was a near impossibility with previous models which had looser front-end suspension. In all, I drove about 50 miles at high speeds on the track. Then I headed for a short half-mile dirt course.

On the dirt, I spun around corners with all wheels screaming but had the car under full control at all times. When this was over, I made several dry side skids doing about 70 and found I could snap it out at any time. The Champion is a remarkably fine handling car.

From the dust track, I headed for some rough South Bend roads which could snap the neck off a Japanese beetle. About ten miles of this proved to me that the Studebaker is probably the finest riding car in its price range made in America today. The car I tested was equipped with a standard three-speed transmission. Overdrive is available at extra cost and would add a mile or two to the top speed. In conventional range (always lower when overdrive is used) acceleration figures would drop anywhere from a half-second to a full second on each run.

I headed for the water trough for a grand finale. Cars are tested there not only for leaks but to find out if they can stand a good dousing. The Studie passed with flying colors.

I like the Studebakers and I like the company that makes them. They are not the fastest cars on the road but that feature is not too important to many buyers. They are, on the other hand, tops in comfort and quality. They’re rugged, reliable, good looking and one of the best dollar values in a car today. •