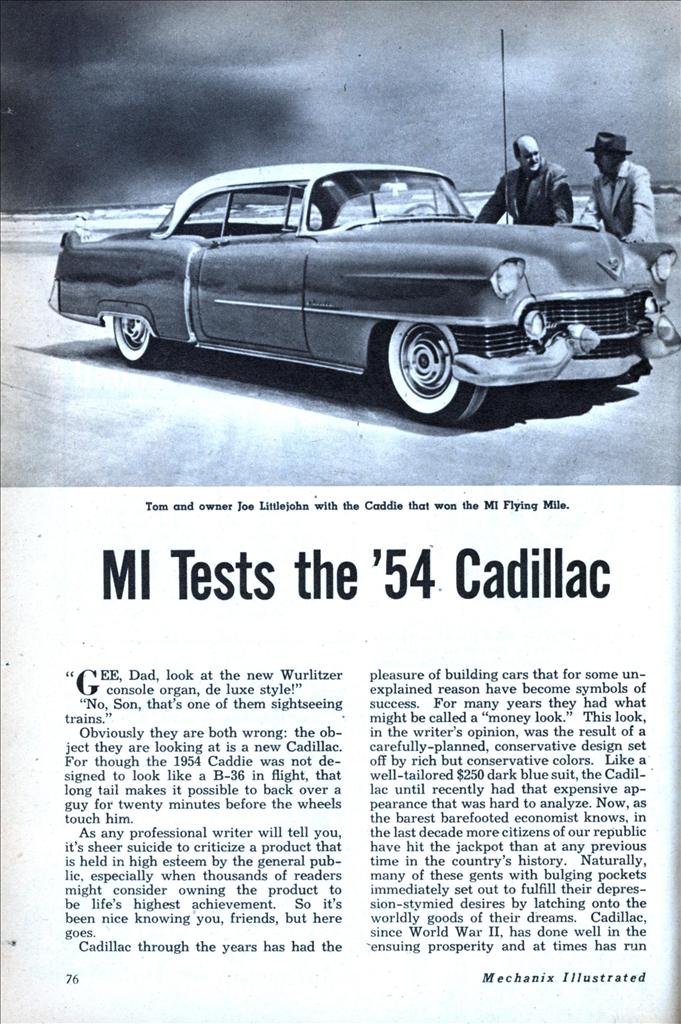 Uncle Tom takes a gander at America’s favorite prestige automobile and discovers that for real economy, believe it or not, Cadillac is tops.

“No, Son, that’s one of them sightseeing trains.”

Obviously they are both wrong: the object they are looking at is a new Cadillac. For though the 1954 Caddie was not designed to look like a B-36 in flight, that long tail makes it possible to back over a guy for twenty minutes before the wheels touch him.

As any professional writer will tell you, it’s sheer suicide to criticize a product that is held in high esteem by the general public, especially when thousands of readers might consider owning the product to be life’s highest achievement. So it’s been nice knowing you, friends, but here goes.

Cadillac through the years has had the pleasure of building cars that for some unexplained reason have become symbols of success. For many years they had what might be called a “money look.” This look, in the writer’s opinion, was the result of a carefully-planned, conservative design set off by rich but conservative colors. Like a well-tailored $250 dark blue suit, the Cadillac until recently had that expensive appearance that was hard to analyze. Now, as the barest barefooted economist knows, in the last decade more citizens of our republic have hit the jackpot than at any previous time in the country’s history. Naturally, many of these gents with bulging pockets immediately set out to fulfill their depression-stymied desires by latching onto the worldly goods of their dreams. Cadillac, since World War II, has done well in the “ensuing prosperity and at times has run more than a year behind the salesmen taking orders.

As a result, Cadillac has become the true economy car of the nation. *Only third-grade delinquents labor under the misapprehension that big gas mileage is the measure of top economy. Economy in an automobile is made up of many factors. Strangely enough, the big Cadillac is the best car by far in gas economy in its price class, due to its excellently designed power plant, and you get better gas mileage with a Caddie than you get with most of the lowest-priced cars. But this is only a small part of the economy figure with Cadillac.

What has made Cadillac the nation’s number one economy car and best automotive investment up until now is its amazing resale or trade-in value. This abnormal situation was caused by Cadillac’s smaller by-comparison production. Roughly 100,-000 units a year (give or take a few thousand one way or the other) was just about half what the Cadillac division of General Motors could have sold each year since 1945 if it had built all the cars it had orders for. In many cases second-hand Cadillacs sold on used car lots for more than their original cost. Hard-used cars brought almost new prices, regardless of condition.

For example, I bought a new Cadillac (full price) in 1950 through New York Cadillac. I racked up about 30,000 very hard miles on it before deciding to dump it and buy a Jag. The paint was faded, the tires were bare and as far as I was concerned my proud beauty had seen much better days. In order to make a quick deal (I was due to hit the road for several months in a day or two) I called a car wholesaler and told him the whole unvarnished truth. I told him the paint was faded and the car needed all new tires and a lot of clean-up work. This wholesaler didn’t know me from Adam but right there on the phone he offered me just $200 less than I paid for the car new more than a year before! We made a deal and he picked up the car within twenty minutes. If I had time to shop around I could have undoubtedly gotten all my original pur-chase-price back.

These facts are what has, in the past, made Cadillac the best automobile investment in the world. In the last year or two this pay-anything-for-a-Caddie situation has eased considerably. They hold value better than any other car but not as they once did. Even today there are a lot of fresh money boys who haven’t bought their first Cadillac yet but the crop is getting thinner by the hour. In a matter of not too many months, I believe Cadillac will have to start fighting the competition on its merits and I for one don’t feel it’s overloaded in this department.

In 1954 Caddie stretched the wheelbase on all models and they now have more overhang in the rear than the old Sheepshead Bay Hook and Ladder wagon. This body overhang doesn’t do a thing for the car’s roadability or ease of handling in a tight spot. One big dealer I know, who took one to the top of Pike’s Peak and back, said he was scared to death the way Old Big Tail whipped around on the tight corners. As for his wife, she wanted to get out and walk. In a nutshell, it boils down to this. Either all the designers who build cars for Le Mans and the Monte Carlo Rally are wrong, or the boys who build Cadillacs are wrong. Extreme overhang and good safe cornering and road holding rarely go together. I can sum up my feeling about the new Caddie styling in one word—Ugh!

When I first got behind the wheel and looked back, I felt as though I was all alone in an Old Town canoe, paddling it from the bow with the stern way out of water. That rear deck really kills me. What a place for drying out a Kodiak bear skin! Forgetting what’s behind you and looking straight ahead as you take to the highway, it’s not unpleasant. In straight-line turnpike travel, this is a nice-handling, rock-yourself-to-sleep-barge. But on hard corners it sure isn’t a Ferrari.

The car I tested belonged to Joe Little-john and was the car that won the 1954 MI acceleration trophy, one mile from a standstill. It’s no ball of fire and a little sluggish in the low ranges but once under way it unravels nicely. Zero to 30 was a comparatively slow 4.8 seconds. Zero to 60 is better but not record-breaking at 12.2 seconds. Zero to 80 is a fast 20 seconds flat. After that it really gets going. Both the big Chrysler and Buick Century can out- m drag it to 60. But over the mile range, the Caddie was unbeatable. After a mile the Chrysler starts to pull up again. Top speed of the model 62 coupe averages between 112 and 115 depending on road surface.

Of course, the car I tested was tuned to the teeth. It not only won the MI one-mile runs but also proved to be the fastest Caddie in the flying mile. It has a wagonload of power but under average driving conditions it’s not sensational. Cadillac accessories have always been tops. The self-tuning radio, heater and all other units are the best of their kind. The finish of the cheapest 62 coupe was not startlingly lush by any measure, inside or out, and where lines and proportion are concerned, I don’t think they compare with my 1950 Model 61 coupe, which at least looked like it belonged in this world.

No doubt Caddie has a lot of prime factors, including its excellent 230-horse-power V-8 engine, that can’t be discounted. Here are a few additional pertinent facts. With that increased length, a Cadillac has just enough ground clearance to slip three flapjacks underneath. Depending on model, the ground clearance ranges all the way from just under 6 inches to 6.2 inches. A fast trip over a high-crowned gravel country road would sound like a Swiss bell-ringers’ convention at break-up time. The smallest 1954 Cad has a turning radius of 45 feet and the big 149-inch wheelbase 75 Fleetwood takes 52 feet, 7 inches to turn around. As all the ’54 jobs are 80 inches fat, maneuvering them through a tight space or backing them out of a small garage might prove similar to the feat of docking the Queen Mary without tugs. All 1954 Caddies have power steering which, considering the car’s dimensions, is understandable.

You don’t have to have a sheephide from M.I.T. to realize that extreme overhang will increase side-slipping leverage at the rear wheels. As I will freely hate all people who do not buy my new book on modern sports cars, regardless of race, color or creed, I suggest if you are interested in good road design that you buy a copy from your local book-keeper. Besides, I need the dough.

Buick engineers bobbed the Century’s tail without losing any trunk space and this departure from what the writer considers a bad trend helps to make the Century one of the best road cars in the country today. If size and size alone is what future de- signers are going to depend on for prestige cars, then I for one will happily go back to the horse and buggy period.- As this goes to press, I have just heard the rumor that Lincoln may be much longer in ’55. I hope not. But if it’s true, I am one customer they have just lost.

In the past, the more expensive cars became the prestige offerings of the day through real ability and outstanding quality. These old-time expensive hacks were the engineering leaders and featured such mundane things as lasting quality and road performance for the less expensive to copy as best they could. Today this “prestige” just seems to mean that somebody-or-other “endorsed” the product.

The greatest single feat ever accomplished by Cadillac was in 1950 when Briggs Cunningham’s stock-Cadillac 61 coupe finished tenth at Le Mans. This short-wheelbase Caddie with export shocks and synchromesh transmission was a real automobile, a credit to the great name of Cadillac. But almost immediately, Cadillac discontinued this 122-inch wheelbase model and started the ever bigger trend it still follows. If a Cadillac of today finished in tenth place at Le Mans it would be similar in accomplishment to single-handedly building the Taj Mahal in your backyard during your two weeks’ vacation.