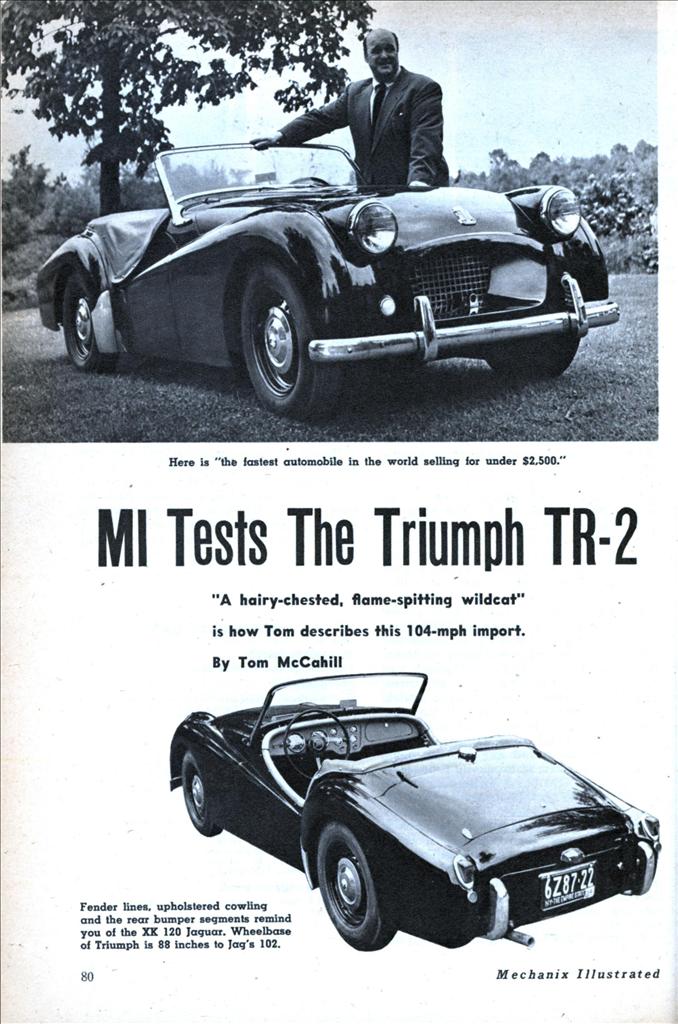 “A hairy-chested, flame-spiffing wildcat” is how Tom describes this 104-mph import. By Tom McCahill THE fastest automobile in the world selling for under $2,500 is one way of summing up the TR-2 Triumph sports car. In its price class, the new Triumph is a hairy-chested, flame-spitting wildcat. With this uninhibited rig you can pass a flat-out MG with enough extra speed in hand to give the MG driver double pneumonia in addition to dust in his eye and a slight eardrum concussion.

If high performance at a price is your dish, then this is it. Not until you reach the Austin-Healey price range will you experience any trouble in knocking off opposition as easy as shooting tied frogs in a barrel. Against the Austin-Healey, several things could happen. If the Austin was in a sloppy stage of indifferent tuning, this little bucket, that costs some $500 less, could beat the Healey to its knees like a poodle in a pit fight with a tiger. With both cars in equally good tune the Triumph, with an engine half a liter smaller, can jump with the Healey from a standstill, wheel turn for wheel turn.

Both cars get to 30 mph in 3.7 seconds average. At 50 mph the Healey has a one-tenth of a second lead and at 60 mph the Triumph is in front of the Healeys I have tested, racking up an average of 11.7 against 12 seconds plus for the A-H. Above 60 the Healey comes into its own again and has the Triumph by four-tenths of a second at 70 mph with a time of 15.8. The fastest run I got with the Triumph was 104 mph, which is fast but not quite up to the Healey. In the overall picture, the Healey has the slightest of edges but not by enough to give any Triumph driver an inferiority complex.

Up until now I have been comparing the TR-2 Triumph with the Austin-Healey, the hottest sports car item on a dollar basis in the world. What I should compare it to is the MG, its immediate price competition. In this rat race the MG never gets off the mark at all. The Triumph can kill the MG in performance in every department including comfort and luggage space, and both have almost similar price tags.

The Triumph’s looks, however, are subject to challenge. To me, the front end resembles a cardboard box that someone has shoved his foot through. Aside from this head-on aspect, which has the esthetic grace of an on-its-side rubbish can, I think the looks are fine. The seats are comfortable and truly adjustable. Whether you are six feet four, or just four,, the seat has enough back and forward movement to square you up. The instrument panel is neat, adequate and as easy to read as a Marilyn Monroe calendar and almost as informative. The drive shaft tunnel divides the port and starboard sides of the car in two, like a Quaker pew. There is enough room behind the seat to cany a limp, flexible drunk and this barge has a real trunk big enough for two five-rib roasts of beef or 10,391 Philco refrigerator ice cubes.

Some months ago rumors started hitting New York about this car, based on some time trials it made at the famed Jabbeke Highway in Belgium. On this course, where a hot kid on roller skates can do 100 easy, the new Triumph racked up an amazing time by averaging over 124 mph. It should be mentioned at this time that all runs on this pike, conducted by the Royal Automobile Club of Belgium, never cease to amaze me. This is the spot where a stock 1953 Chrysler did 127, Jags almost 180 and Native Dance 104.3. I used to suspect an eager Chamber of Commerce, or two downhill runs, or a slow watch, or kilometer times given out in miles. With this in mind, I drove there last year and looked over the situation. It’s a nice stretch but so are hundreds of others. I’m still puzzled.

Anyhoooooooooo — the Triumph that made the run, like Donald Healey’s Austin-Healey that ran 142 mph on the salt flats, was to say the least slightly different from the car you might pick out at random from the production line. The windshield was replaced with the extra-cost competition screen. The entire car was underpanned, etc., etc. Needless to say, the car was well tuned also. However, without being snide, I do understand through the grapevine that, with some just normal tuning and a few things here and there including the lower windshield, speeds of 114 can be expected. The open cockpit area is very large and the vacuum created by this at high speed when the top is down is enough to yank the rack off a full-blown bull moose. On the car I tested, an extra-equipment and well-fitted tonneau cover broke up this vacuum pretty well.

The top is not bad at all but putting it up calls for erecting the support bones first and then, like a swirling matador, tossing the fabric over the bare-ribbed frame. Snapping the cover on after that, with easy-to-work snaps, is about as easy as these things usually are. The side curtains really seal out cold or rain and the material of both the top and curtains has the feel of a medium-weight rubber boot—fireman’s boot, that is.

The exhaust and muffler system is terrific, in my book. I understand that this has evoked some adverse criticism from my English contemporaries who are hog wild about quiet. To me it sounded great Under ordinary throttle pressure it sounds for the most part like a well-modulated cylinder exhaust dampner (dig that crazy exhaust dampner). However if, whilst you are on the throttle, you give it a real high-C goose, whilst running up through gears, a real soul-stirring, deep panther growl will result. It has a rather rich flat staccato, similar to a “Bronx school lad cheering visiting dignitaries.

The steering of this car is positive and quick. There is an overdrive button which operates with all the smoothness of a new chamois wiping off a bald head. This is a tremendous gas economy feature for long trips and an engine-saver. The overdrive control is sure and only operates off or on when this easy-to-reach button is pushed or pulled. If you don’t get better than 30 miles to the gallon with this rig on a trip, you can look for a hole in the tank; Under normal operating conditions, up to 35 miles or more on a gallon can be expected.

This 4-cylinder, overhead-valve sports car develops 90 horsepower at 4800 rpm. I made my tests in the East on my own proving grounds. My hill test, which it took without too much fuss, had to be made in second gear. The Triumph matches the Healey horsepower, oat for oat, but falls short in the torque department with a maximum of 116 against the Healey’s 144. Healey gets this advantage through the extra half-liter in engine size. The extra load of muscle gives Healey the nod in a hill climb but, as we said earlier, the Triumph will match it for quite a while, shovel for shovel, in the dig department on the flat. Of course, it’s not fair to compare the two cars. I’ve been doing it not as a buildup for the Healey but as a tremendous compliment to the Triumph. After all, at the same price difference between the two cars, a modified Jag could gulp down the Healey, side curtains and all, without even unlimbering. In my handling test I found that the Triumph was not quite as solid in the rear as the Healey in slides and spins but a great, controllable car regardless and far superior to many more expensive sports jobs.

In summing up, the Triumph caught me completely off base in spite of all I had heard about it. It is far superior to what I thought it would be. In fact, it is a great automobile, especially at the price which at present is $2,448 (less tax and license) in New York. This may be reduced shortly to around $2,200 according to the listening post. At just about $2,500 it is one of the best sports car buys around. Bear in mind, these cars should win almost every race they start in—where price is the dividing class. In the more unfair hassles, where cubic-inch displacement regardless of price is the factor, it won’t rate against Oscas, Ferraris and similar ilk of the same size engine and costing at least four times as much. In its own bailiwick and price class, the Triumph TR-2 is unbeatable at this writing.