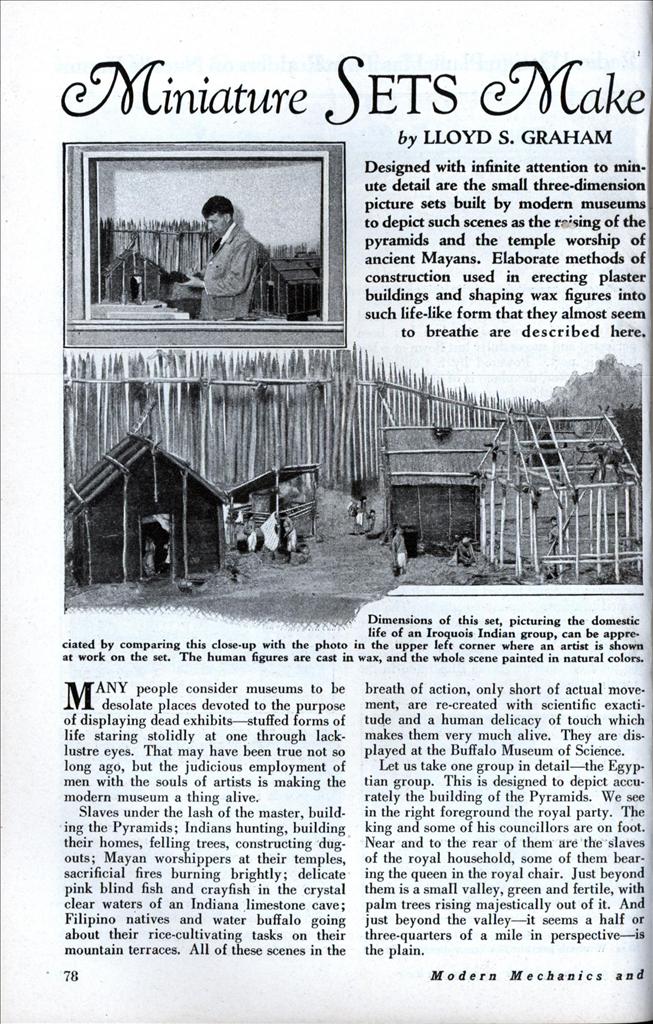 Designed with infinite attention to minute detail are the small three-dimension picture sets built by modern museums to depict such scenes as the rising of the pyramids and the temple worship of ancient Mayans. Elaborate methods of construction used in erecting plaster buildings and shaping wax figures into such life-like form that they almost seem to breathe are described here.

MANY people consider museums to be desolate places devoted to the purpose of displaying dead exhibits—stuffed forms of life staring stolidly at one through lacklustre eyes. That may have been true not so long ago, but the judicious employment of men with the souls of artists is making the modern museum a thing alive.

Slaves under the lash of the master, building the Pyramids; Indians hunting, building their homes, felling trees, constructing dugouts; Mayan worshippers at their temples, sacrificial fires burning brightly; delicate pink blind fish and crayfish in the crystal clear waters of an Indiana limestone cave; Filipino natives and water buffalo going about their rice-cultivating tasks on their mountain terraces. All of these scenes in the breath of action, only short of actual movement, are re-created with scientific exactitude and a human delicacy of touch which makes them very much alive. They are displayed at the Buffalo Museum of Science.

Let us take one group in detail—the Egyptian group. This is designed to depict accurately the building of the Pyramids. We see in the right foreground the royal party. The king and some of his councillors are on foot. Near and to the rear of them are the slaves of the royal household, some of them bearing the queen in the royal chair. Just beyond them is a small valley, green and fertile, with palm trees rising majestically out of it. And just beyond the valley—it seems a half or three-quarters of a mile in perspective—is the plain.

On this plain at the left is a partially completed Pyramid with bricks of dried mud leading from one level to another and, at the base, a long, broad ramp leading across the plain to the valley of the Nile and the Nile River below, shimmering in the distance at the extreme right of the group. In the distance are other completed Pyramids. On the Pyramid under construction, and the ramp leading to it, may be seen thousands of toiling slaves. All very real, and a step-back of several thousand years as one looks. You see in the making King Khefran’s Second Pyramid, 3,000 B. C.

Months of work by experts have gone into this group. First a sketch is drawn. This determines the general layout. And from this a working model of cardboard and paint is built. Scientific works are assiduously studied for details, figures, measurements and a thousand and one minutiae. With rough conformation to the ground contours which are to come later, the base is built up solidly out of two-by-fours, covered with fine mesh hardware cloth. The back of the group is painted to simulate sky or a portion of the scene and so cleverly done that when the group is finished it will be difficult for you to tell just where the modeling ends and the painting begins.

The hardware cloth is covered with papier mache, compounded of plaster of Paris, glue and wood pulp, and moulded into the desired contours. This is the best material for the purpose, better than plaster alone, be- cause the glue prevents it from cracking. Then they are ready to build up the details. With the measurements and proportions decided upon, the details are worked out, not at the group but in work rooms where they are less likely to be disturbed and where ample equipment and supplies are at hand. The Pyramid as it is to appear under construction is worked out with modeling clay. When this model is satisfactory the real model to be used in group is cast in plaster of Paris from a plaster cast of the clay model. This is then placed in the group with great care.

The thousands of slaves and overseers whom one sees upon the long ramp and the Pyramid itself are cast out of type metal. The huge stones which they are hauling are cast of plaster. The seemingly huge palm trees are made up out of wire, green tissue paper and wax. The wax is in true color for whatever purpose it is used, and not painted. The fronds are wax and tissue with the exception of stem and rib, which are of fine wire. As a finishing touch they are gone over with an air brush.

The figures in the foreground present another problem. In true perspective, they must stand out. So they are three and one-half inches high. There are several of them and each one is doing something. From the preliminary sketch, poses are determined. Clay models are made from figures in appropriate poses. Many of these must of necessity be in the nude. Lacking models, the artists must work from detailed photographs of models in appropriate poses.

After each figure is satisfactorily done in clay, a plaster cast is made of it, wax is poured into the cast, and the completed figure, except for detail touching up, is ready to be put into its place in the group. Before the foreground group is placed, however, the entire papier mache base and plaster Pyramid, type metal slaves and plaster stone, have been painted. The plain shows dun-colored and hot with sunlight while the valley of the Nile and the small valley in the foreground, with the palms, is coolly green.

A plate-glass frame is placed vertically, or perhaps at a slight angle from the vertical, in front of the whole group. You see a perfect panorama of Egyptian life. In the middle distance, the broad ramp from the Nile to the Pyramid seems 900 feet long, but it is only six feet, three inches.

The Egyptian group was worked out by two artists, H. Brainard Wright and Herbert Maier. They did the Boro Budur group, showing several figures, an elephant, foliage and trees in the foreground, and in the middle distance the massive multi-towered shrine. They did the Mayan temples at the city of Tikal, with scores of devotees in wax and its two temple fires burning brightly.

They are now doing a series of groups on early agriculture and civilizations based upon various phases; wheat in the Egyptian, described in detail, corn in the culture of the Hopi Indian, and others, including rice in the Philippines. In the latter group there is a scene of terraced mountains under cultivation, with several figures in the foreground in various acts of rice cultivation.

One of the largest and most impressive groups is that of the Iroquois Indians. Here a tremendous amount of detail and faithfulness in reproduction bares to the eye in a few seconds a wealth of Indian lore: An Indian felling a tree by burning, another returning from the hunt with a turkey, Indians stripping bark from trees to cover their houses, Indians digging and burning out a canoe, Indians in the activities of house and barricade construction, Indian women going about their domestic duties, children at play, babies; an astonishing result of the proper use in the hands of artists of wax, wood, papier mache, moss, wire, paint and a multitude of other materials.

Outstanding work in this line is also being! done by two brothers, George and Paul Marchand. They are particularly proud of the Sargasso Sea group. Here, you look into the sea. The top of the group is the seaweed-strewn surface of the blue water. In this, floating and attached to the seaweed are 65 forms of animal life—fish, crustaceans, and so on—all done in wax. Moreover, the seaweed—thousands of casts of leaves and seed pods—is in wax, held together with wax-dipped wire.

Another odd group by the Marchand brothers is that depicting a cave like those to be found in the limestone district of southern Indiana.