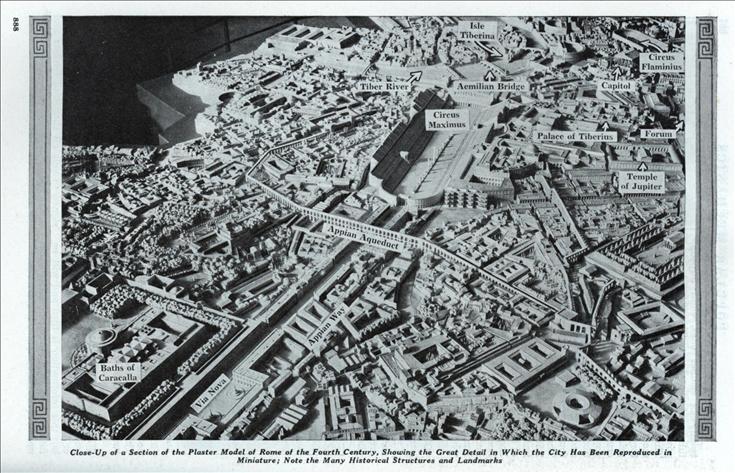 After more than thirty years of work, a French architect, Paul Bigot, has completed a stupendous task, the building of an accurate relief map of Rome as it was about the fourth century, A.D., when the city was at the peak of its power. At that time Rome was the center of as much of the world as was then known. It had gathered the riches of conquered countries and was crowded with temples, palaces, shrines and stadiums. Few of these have escaped destruction but most of the structures have left a trace, either in book or in stone, and M. Bigot carefully studied every source of Roman history before attempting to construct this ancient city as the Caesars knew it. The plaster model of the Eternal City is twenty feet wide and forty feet long and thousands of little blocks represent the monuments and buildings of the past. The scale is one to 400 and three-fourths of the city is represented. Every detail is carefully reproduced so that looking at the model gives the same impression, it is claimed, as though the observer had been able to fly over the Rome of ancient days and view the city from an airplane. The model has been placed for exhibition in the Paris institute of art and archaeology.