Modern Mechanix
Issue: May, 1931
Posted in: Toys and Games
6 Comments on Modern Mania for Mergers Now Menaces Minor Sports (May, 1931)

And of course we all play Bilgo and Poogo to this very day. 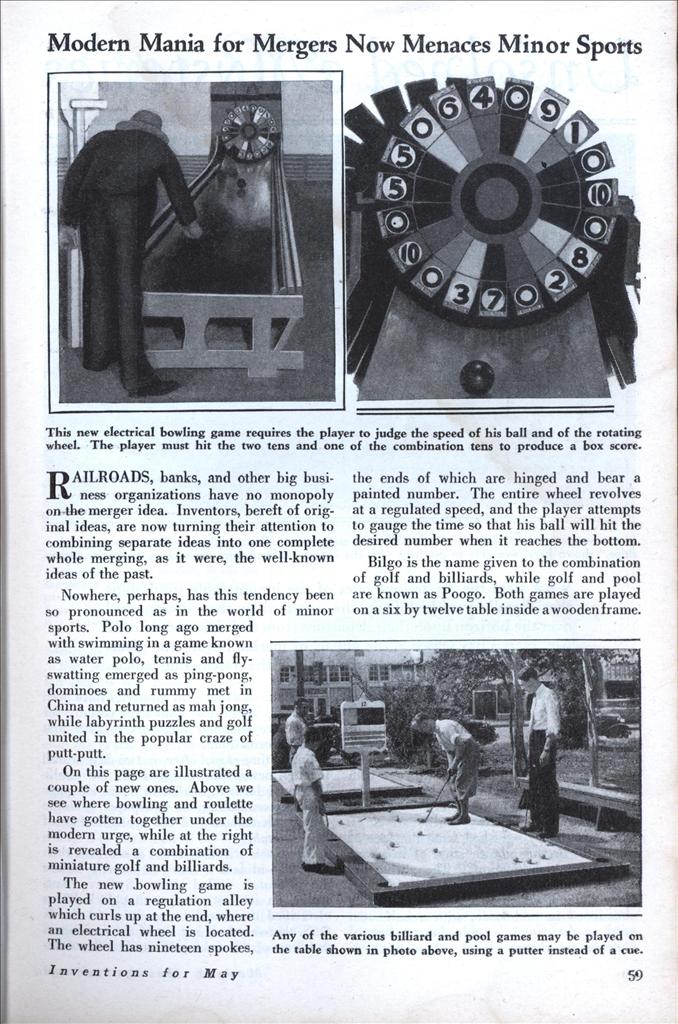 RAILROADS, banks, and other big business organizations have no monopoly on the merger idea. Inventors, bereft of original ideas, are now turning their attention to combining separate ideas into one complete whole merging, as it were, the well-known ideas of the past.

Nowhere, perhaps, has this tendency been so pronounced as in the world of minor sports. Polo long ago merged with swimming in a game known as water polo, tennis and fly-swatting emerged as ping-pong, dominoes and rummy met in China and returned as mah jong, while labyrinth puzzles and golf united in the popular craze of putt-putt.

On this page are illustrated a couple of new ones. Above we see where bowling and roulette have gotten together under the modern urge, while at the right is revealed a combination of miniature golf and billiards.

The new bowling game is played on a regulation alley which curls up at the end, where an electrical wheel is located. The wheel has nineteen spokes, the ends of which are hinged and bear a painted number. The entire wheel revolves at a regulated speed, and the player attempts to gauge the time so that his ball will hit the desired number when it reaches the bottom.

Bilgo is the name given to the combination of golf and billiards, while golf and pool are known as Poogo. Both games are played on a six by twelve table inside a wooden frame.