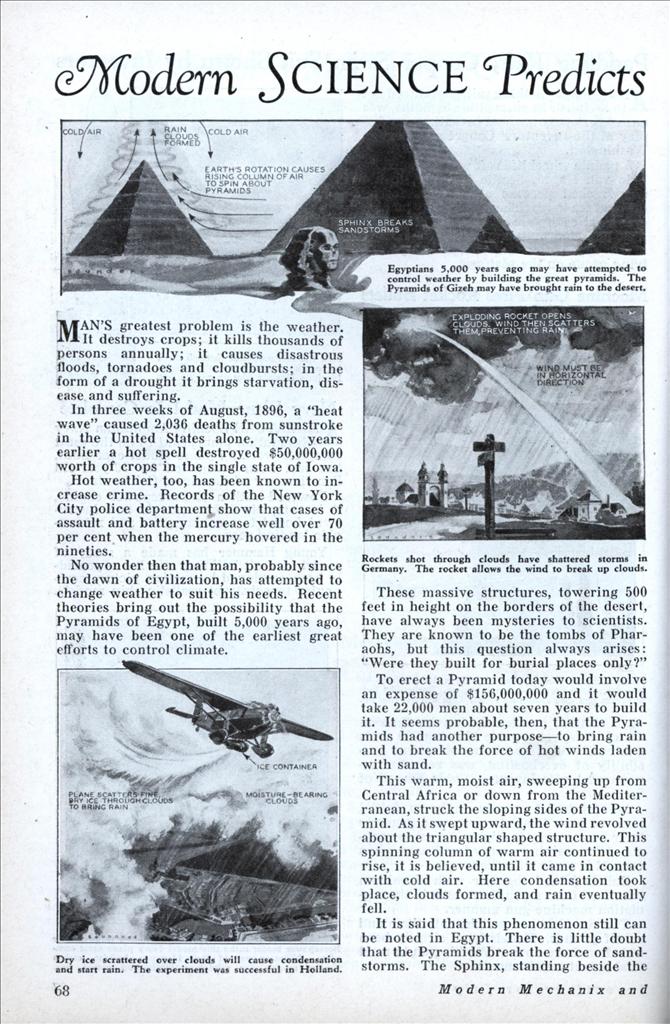 MAN’S greatest problem is the weather. It destroys crops; it kills thousands of persons annually; it causes disastrous Hoods, tornadoes and cloudbursts; in the form of a drought it brings starvation, disease and suffering.

In three weeks of August, 1896, a “heat wave” caused 2,036 deaths from sunstroke in the United States alone. Two years earlier a hot spell destroyed $50,000,000 worth of crops in the single state of Iowa.

Hot weather, too, has been known to increase crime. Records of the New York City police department show that cases of assault and battery increase well over 70 per cent when the mercury hovered in the nineties.

No wonder then that man, probably since the dawn of civilization, has attempted to change weather to suit his needs. Recent theories bring out the possibility that the Pyramids of Egypt, built 5,000 years ago, may have been one of the earliest great efforts to control climate.

These massive structures, towering 500 feet in height on the borders of the desert, have always been mysteries to scientists. They are known to be the tombs of Pharaohs, but this question always arises: “Were they built for burial places only?”

To erect a Pyramid today would involve an expense of $156,000,000 and it would take 22,000 men about seven years to build it. It seems probable, then, that the Pyramids had another purpose—to bring rain and to break the force of hot winds laden with sand.

This warm, moist air, sweeping up from Central Africa or down from the Mediterranean, struck the sloping sides of the Pyramid. As it swept upward, the wind revolved about the triangular shaped structure. This spinning column of warm air continued to rise, it is believed, until it came in contact with cold air. Here condensation took place, clouds formed, and rain eventually fell.

It is said that this phenomenon still can be noted in Egypt. There is little doubt that the Pyramids break the force of sandstorms. The Sphinx, standing beside the Great Pyramids of Gizeh, has almost been buried in sand deposited by winds.

For the same reason the modern city with its skyscrapers provides better air and temperature than a crowded city of low flat buildings. Weather bureau records show that heat prostrations in cities have been reduced considerably during the last generation. Warm air striking a skyscraper is forced to circulate upward around the building, forcing cold air down and reducing temperature in the streets.

Recent experiments have resulted in successful attempts to control rain, fog and frost. A huge electrodome tower, built by William Haight, of Whittier, Calif., breaks up ground fogs and frosts. It discharges negative electrical currents which force moisture in the air to condense and fall as rain or move upward in the form of clouds.

In Holland a chemist named Veraart caused rain to fall by dropping dry ice on clouds. He went up in an airplane carrying 3,200 pounds of ice, rose above the clouds and scattered his cargo. The ice, causing condensation, brought rain to an area about six miles square.

In Germany thunderstorms have been broken up with rockets. The experiment was tried on the theory that a horizontal wind can not force its way through a bank of thunderclouds and break up the oncoming storm. A rocket pierces a hole in the clouds through which the wind passes and finally scatters the clouds. The experiment was tried after soldiers of the World War observed that heavy bombardments often dissipated storms.

Clouds are made up of minute drops of water, each charged with a small amount of electricity. If this electricity can be discharged rain can be drawn. It is on this theory that Haight built his electrodome in California to protect citrus farms from fog and frost.

Fog consists of tiny kernels of salt in a shell of condensed air, charged with positive electricity. A negative charge, therefore, would dispel fog.

Although attempts to control weather have been successful in these and other experiments, the devices used are not entirely practical from the standpoint of cost. Scientists, however, are nearing solution to the problem. It is quite probable that man in the future will be able to produce weather \o suit his needs and to destroy the disastrous effects of storms, droughts, and heat waves.