Modern Mechanix
Issue: Nov, 1932
Posted in: Sign of the Times
1 Comment on Money Making Ideas That Whipped the Depression (Nov, 1932)

The title of the article is a but optimistic, but that “Fresh Water Taxi” on the first page looks awesome. 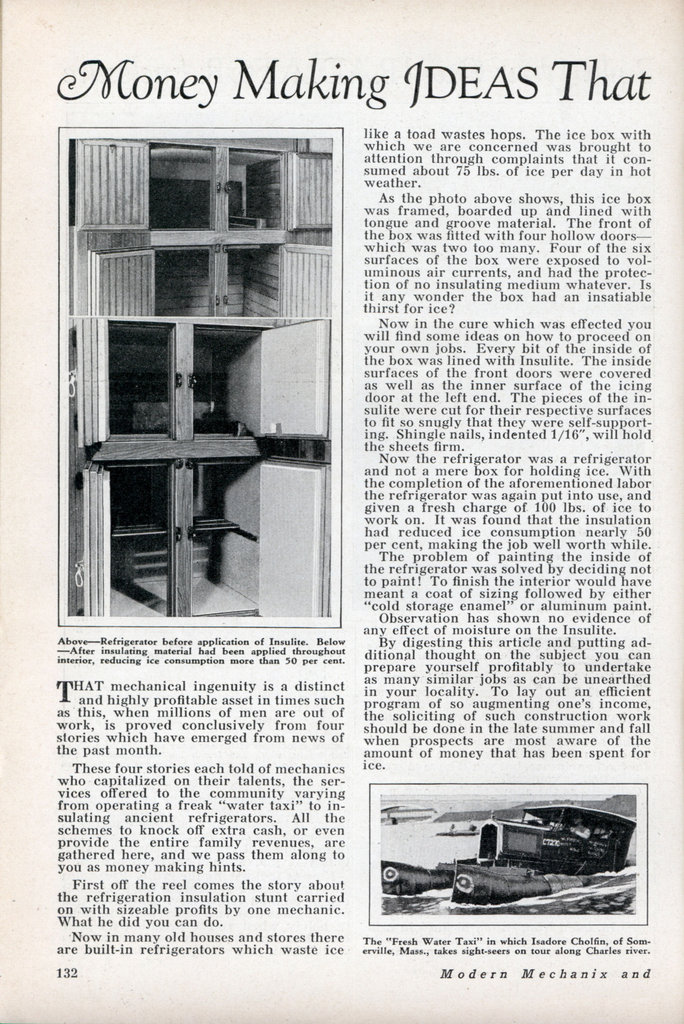 THAT mechanical ingenuity is a distinct and highly profitable asset in times such as this, when millions of men are out of work, is proved conclusively from four stories which have emerged from news of the past month.

These four stories each told of mechanics who capitalized on their talents, the services offered to the community varying from operating a freak “water taxi” to insulating ancient refrigerators. All the schemes to knock off extra cash, or even provide the entire family revenues, are gathered here, and we pass them along to you as money making hints.

First off the reel comes the story about the refrigeration insulation stunt carried on with sizeable profits by one mechanic. What he did you can do.

Now in many old houses and stores there are built-in refrigerators which waste ice like a toad wastes hops. The ice box with which we are concerned was brought to attention through complaints that it consumed about 75 lbs. of ice per day in hot weather.

As the photo above shows, this ice box was framed, boarded up and lined with tongue and groove material. The front of the box was fitted with four hollow doorsâ€” which was two too many. Four of the six surfaces of the box were exposed to voluminous air currents, and had the protection of no insulating medium whatever. Is it any wonder the box had an insatiable thirst for ice?

Now in the cure which was effected you will find some ideas on how to proceed on your own jobs. Every bit of the inside of the box was lined with Insulite. The inside surfaces of the front doors were covered as well as the inner surface of the icing door at the left end. The pieces of the insulite were cut for their respective surfaces to fit so snugly that they were self-supporting. Shingle nails, indented 1/16″, will hold the sheets firm.

The problem of painting the inside of the refrigerator was solved by deciding not to paint! To finish the interior would have meant a coat of sizing followed by either “cold storage enamel” or aluminum paint.

Observation has shown no evidence of any effect of moisture on the Insulite.

By digesting this article and putting additional thought on the subject you can prepare yourself profitably to undertake as many similar jobs as can be unearthed in your locality. To lay out an efficient program of so augmenting one’s income, the soliciting of such construction work should be done in the late summer and fall when prospects are most aware of the amount of money that has been spent for ice.

IF A leather medal were awarded for novelty in devising unique, not to say humorous schemes for making money, it would undoubtedly go to Isadore Cholfin, of Somerville, Massachusetts. What Isadore rigged up to bring in the extra shekels he has dubbed the “Fresh Water Taxi.”

The thing is shown in the photo at the bottom of the opposite page, so you can raise no reasonable doubts about its navigating abilities. The superstructure, deck, engine room, pilot house, and all the other things a ship has is, in the case of the “Fresh Water Taxi,” merely the body of an old auto that has seen better days.

As to the hull of the taxi-ferry that is a bunch of old oil drums welded together into a couple of substantial pontoons. Steering is effected through the regular steering wheel, which is attached to the rudder.

Isadore is doing a thriving business hauling sight-seers along the Charles river. Taking a tour is really an adventure, judging from the looks of the craft.

Who would believe that the manufacturing of lampblack would yield a nice income? To James Coggswell, a sixteen year old Pasadena, California, schoolboy, goes the honor of devising a method of small scale manufacture of this product which brings him in sufficient revenue to buy clothes needed in connection with his attendance at the Southwestern Military Academy. In addition he has plenty of weekly pocket money from his labors.

The product of Coggswell’s plant is packed in paper bags and finds a ready market among local cement contractors.

They use it to tone down the glare of the too-white concrete in highway and sidewalk construction.

The plant may be seen in the photo at the bottom of the page. The manufacturing process is as follows: Crude oil is first burned in a drum wherein the supply of oxygen is controlled by means of dampers. This incomplete combustion releases a heavy black smoke made up of carbon particles which is drawn off by a suction fan and blown into a series of settling chambers. Here screened baffle plates allow the carbon particles (lampblack) to be dropped in the collecting bin, while the gases pass through and escape. The lampblack is then scooped up and bagged.

The grinding stunt is an old stand-by, but it has remained for an auto-owner in Cleveland to exhaust its possibilities. What this particular motorist did was to devise a portable grinding unit, so designed that it could be fitted right on the mudguard of the car, as illustrated in the photo at the top of the page. Power for operating the wheel is taken from the engine of the car by means of a belt and an extra pulley installed immediately in front of the fan belt.

The grinder is not only very efficient but very economical as well, for gas consumption is very small due to the small load. The novelty of the device always causes a crowd to collect as the grinder makes his rounds throughout the town. This form of advertising brings him more business than he can handle. The device is readily removable, thus permitting the car to be used for pleasure purposes after business hours.