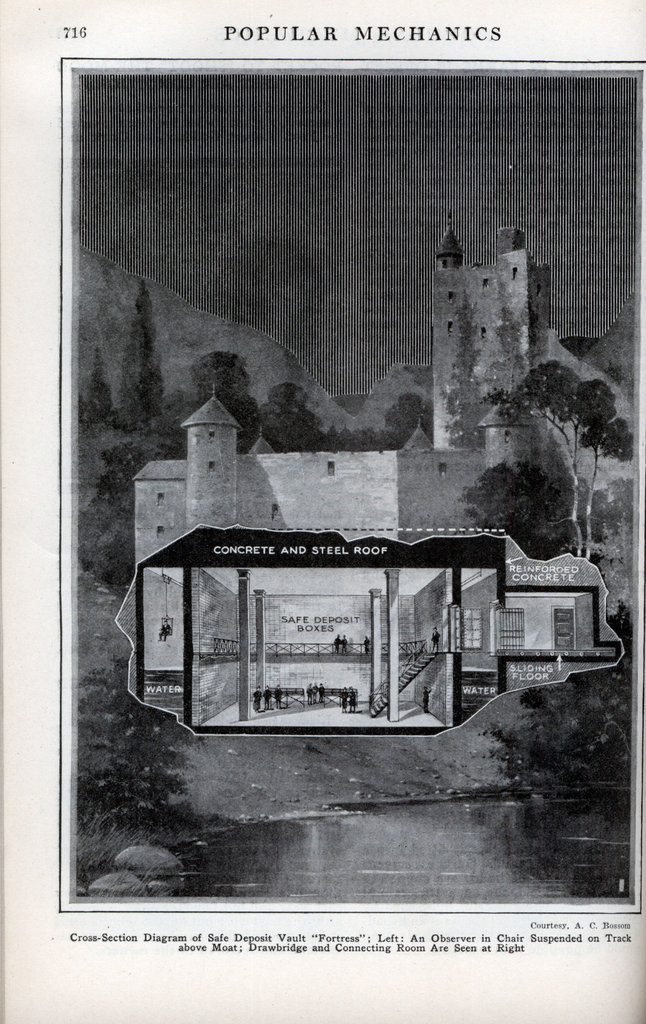 Surrounded by a deep moat and covered with a bomb-proof roof, a safety deposit vault, constructed on the lines of a medieval fortress and considered impregnable to raids from land or air, has been built for tlie Bank of France. Heavy steel girders, and concrete several feet in thickness, form the top, which is impervious to explosives that might be dropped from aircraft. Over the moat, containing twelve feet of water, a sliding floor from an adjacent building provides access to the single entrance of the vault. When the bridge is withdrawn, a steel door closes flush with the walls, guarding the opening to the deposit boxes as the portcullis protects the gateways to old castles. An observer’s chair, suspended above the moat from an overhead track, provides a seat for a lookout to watch for attacks from robbers or bombers. The plan was devised by Alfred C. Bossom, of New York, an American architect, and has proved so successful that it is to be used in the construction of other vaults.

When tourists alight from their automobiles at a camp in a California city, they are confronted with a replica of the trunk of the redwood giant, Old Methuselah, a Sequoia tree, 107 feet in circumference and believed to be 4,000 years old, one of the sights of the forest not far from the city. The unique structure, advertising the scenic wonders of the district, houses the headquarters of the camp from which information and aid are given to travelers. Bark was used for the sides of the building, the furniture was made of redwood and a fireplace was constructed of native granite.