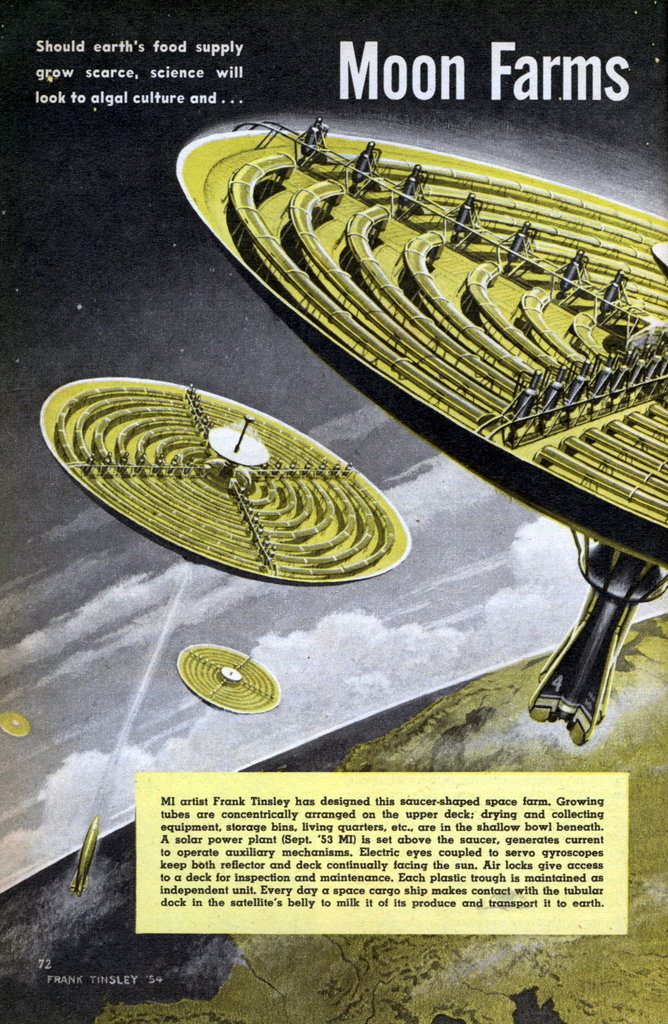 FIFTY years from now much of the world’s food may be grown high in the sky! Tomorrow’s farmers may raise their crops on artificial “moons” that have been launched into space and move in orbits around the earth. And the successful agriculturalist will probably be a combination chemist, biologist and engineer.

Fantastic as it may sound, this revolutionary type of farming is more than possible. Five years of intensive research in this country and 60 years of study by five other nations have explored its potentialities. This news comes from the very conservative Carnegie Institution of Washington which has released a 357 page report on the almost unbelievable new science of “algal culture.”

The report gives special emphasis to plants known as algae, especially the type called Chlorella which are grass green in color, microscopic in size and have cell walls composed of cellulose and pectins. In case these rarely mentioned growing things are unfamiliar to you. they are the ex-

tremely primitive, one-celled plants that sometimes make green scum on stagnant water. It is these algae that may radically change the world’s eating habits and also provide the fuel that will be urgently needed when present stocks of coal and oil are depleted.

Some day, the report makes clear, this new agriculture may produce, on a single farm the size of the state of Rhode Island, half the essential protein foods needed by the earth’s 2,400,000,000 persons.

No less startling is the prediction that civilization’s total annual food and energy requirements 50 years hence might be produced on less than.a fifth of the planet’s surface. Included will be all the fuel for industrial power production such as heating, lighting and transportation.

If moon farms are used, man will be able to grow enough food to feed himself and his domestic animals and in addition produce all the heat and energy he requires.

The farms, both in the sky and on the ground, will resemble a farmer’s nightmare. They will consist of gigantic tanks filled with algae, water and necessary plant nutrients, kept in an atmosphere enriched with carbon dioxide. The water will be continuously circulating in the tanks so that die algae will be exposed to sunlight every few seconds. The energy for circulating the water will be supplied by using dried algae themselves as fuel.

The major purpose of this weird-sounding project is to provide cheap food for mankind. The algae, the Carnegie-sponsored experiments have shown, contain enormous amounts of protein, the food element most lacking in many areas of the world. Proteins are the body’s building blocks and cost more than other foods. Their biggest source is meat which many people cannot afford in sufficient quantity although they are found in generous amounts in some grains and vegetables, too.

As Dr. John S. Berlew, editor of the report, explains:

“The possibility of growing a high-protein plant food in large quantities is of paramount importance in connection with long-range planning for the feeding of the ever-expanding world population. In many areas large numbers of people lack sufficient protein and therefore exist in a state of malnutrition.

“There is little hope of relief by the traditional methods of raising animals for food because of the large areas of land required to grow grass and other crops to support them. Furthermore the local production of fish is not always feasible. In this sort of situation algal culture may fill an urgent need.”

Concerning the use of moving moons, Dr. Berlew has this to say:

“Still another potential application of algal culture might be in a space station. Ley, the famous German expert on space ships now in this country, has described recently the sort of structure being planned as an artificial satellite. A great deal of machinery Â¦will be needed in the space station to maintain pseudo-terrestrial environment suitable for man. The addition of an algal-culture unit for production of food for the inhabitants would not seem to increase in very large proportion the complexity of the structure and it would eliminate many costly trips of a space ship bringing food from earth, besides providing a supply of oxygen.”

In order to fully appreciate the aims of the scientists in their spectacular new venture, it is important to bear in mind certain basic facts about algae. There are 17,000 species, ranging in size from those too small to be seen by the naked eye, to some oceanic species 100 feet long. In recent years a few species of Chlorella have been used as research tools by plant physiologists in the study of the mechanism of photosynthesis. One such investigation made about five years ago by Spoeher and Milner showed that the protein composition of the single-celled alga, called Chlorella pyrenoidosa, could be controlled. This finding gave American scientists the idea that single-celled alga might be grown on a large scale as a source of food.

A vital fact to remember is that, barring accident, an algal cell does not die: it divides into more algal cells. There are about 20,000,000,000 cells in one quart of a bright green, moderately thin suspension of Chlorella. This is almost 10 times the number of people in the world!

The daily increase of such an algal suspension is also enormous. While the suspension is growing vigorously during a sunny summer day, the number of cells may easily double.

Foods made from Chlorella have a flavor something like a combination of raw pumpkins and lima beans.-There is also an alga soup. Appetizing dishes can be made from algae according to tests “made in the United States, England, Japan, China and Venzuela.

Along the coast of Europe some algae are regularly collected and dried for use as cattle fodder. In Japan certain types have been considered delicacies for centuries. Dr. Hiroshi Tamiya has described dry, powdered Chlorella ellipsoida as tasting like a dried seaweed or powdered green tea, both popular in Japan. It can be added in amounts up to 20 per cent to powdered green tea without being noticed. In addition, the Japanese scientist reports that the powdered algae can be added to a mixture of buckwheat and wheat flours to make acceptable noodles. Or it will make an acceptable substitute for soy sauce.

As for the precise nutritional value of algae, the report offers some astonishing facts. Chlorella is a rich source of vitamin A and its vitamin B1 content also is high. This algae has about the same vitamin C (ascorbic acid) content as lemon juice, a top source of this vital substance.

The protein content of most algae is enormous. In the case of Chlorella pyrenoidosa it is possible to control environmental conditions during growth so that a protein content of at least 50 per cent is regularly attained. This protein content is much higher than that of fish meal and tankage, the best vegetable sources of protein used in animal foods. Nut meats used as human food contain only six to 34 per cent protein.

In 1951 the Carnegie Institution cooperated with the Arthur D. Little Company, industrial consultants of Cambridge, Mass., in setting up a pilot plant in Cambridge to test the practical possibilities of Chlorella pyrenoidosa farms.

Experiments made during a period of a year in the pilot plant showed that large scale algal culture is technically feasible. Nearly 100 pounds, dry weight, of Chlorella were grown and made available for studies of its nutritive properties and its possible application as an industrial raw material. The results suggested that it will be possible to harvest more than 17 tons of dried Chlorella per acre annually as soon as minor technical difficulties have been licked.

The Cambridge experiments proved that the elements of a pilot plant for growing algae on a large scale, either on the ground, on building tops, or on artificial satellites, are relatively simple: (1) a container with a transparent upper surface; (2) a means of circulating the culture medium within the container so that the algae do not settle; (3) a means of controlling the temperature; (4) a means of introducing carbon dioxide and other nutrients continuously; (5) a means of harvesting the algae almost continuously; (6) a means of processing the harvest so that it is preserved until used.

An especially fine feature of algae as human food is its easy digestibility. The scientists point out that in most fruits and vegetables the portion used as foodâ€”seeds, fruits, leaves, etc., are less than half the dry weight. The rest is stalk, leaf or root.

In sharp contrast to this situation, tests at Cambridge and elsewhere have shown that Chlorella algae, containing 50 per cent protein, can be entirely consumed. This protein, in a form easy to digest, contains the 10 amino acids required for human nutrition.

A great advantage the algae have over other plants is their utilization of the sunlight that falls on a particular area. During the growth of most green vegetable plants, only about two per cent of the usable solar energy is converted into organic matter (chemical energy). In contrast, the efficiency of light-energy conversion in both large and small-scale cultures of Chlorella is 12 to 20 per cent, provided the intensity of the illumination is not too high.

The Carnegie scientists report that algae show great promise as a source of raw material for industrial use, notably for the production of chlorophyll, casein and synthetic cortisone, the anti-arthritis drug.

Looking at the future of the new science from the standpoint of the average person, Dr. Vannevar Bush, President of the Carnegie Institution of Washington, suggests that algal culture may be adapted to individually owned, relatively small establishments, with the algae utilized both for human needs and for animal feedings.