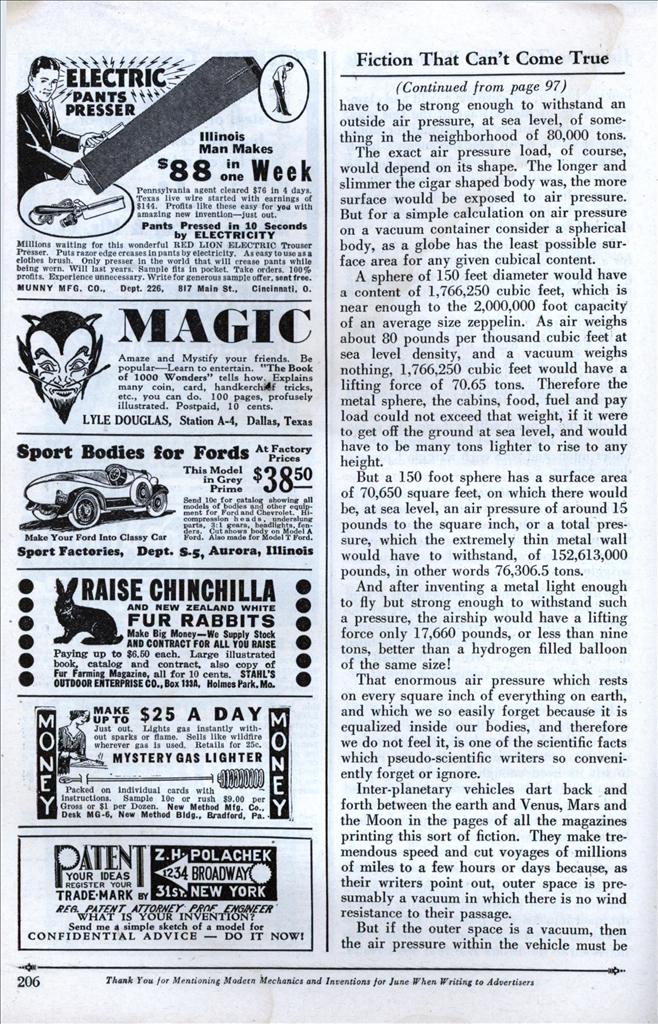 ONE of the leading lights of the pseudo-scientific fiction writing school recently produced a story in which his characters used a marvelous German-built airship to reach an imaginary world in the imaginary hollow center of the earth. The airship was unusual because it contained a vacuum instead of gas, and was built of a mysterious metal so strong it could withstand the enormous air pressure on the outside.

Another entertaining writer of the same ilk followed with a yarn in which people were reduced to radio energy, transported through space by wireless, and instantaneously reassembled at the other end, minus metal fillings of their teeth and any other metal they might have had on their persons.

The writer who transported his characters through the air by radio ignored the power factor, for he had his villain using a portable outfit run by a small gasoline driven generator.

The reduction of a human body to electrical energy and a wireless wave presents a pretty problem. Presumably the body would turn into a wide variety of metals and gases before it could be converted into electrical energy, and at the other end would have to go through a similar process to be reassembled. The hypothesis stated by Prout in 1815 that all elements are aggregates of hydrogen is abundantly borne out by the modern atomic theory, which holds that the atom of any element is a positively charged nucleus surrounded by varying numbers of negatively charged electrons.

Experimenters in Germany and in New York in recent years have tried to convert lead into gold by knocking off the extra electrons, and there is reason to believe that that can be done, if sufficient power could be obtained. But the power consumed would be so great that the gold obtained would be the most valuable substance ever dreamed of, for its price would run into hundreds of thousands, if not millions of dollars an ounce.

In theory, though, each of the 92 elements in the atomic table could be reduced eventually to hydrogen, the lightest of all, by successively changing the atomic structure through removing the excess atoms, and, going a step further, it might be possible to reduce the basic hydrogen atom to electrical energy by dissolving the hold which its nucleus has on its surrounding electrons. But if such a process were possible and the power to accomplish it were available, then the carbon in one’s body, for example, would first turn into boron, and then successively to beryllium, lithium, helium and hydrogen, while the trace of iodine in the human frame, being No. 53 in the atomic table, would have to go through that many steps before it was reduced to the common denominator. And in the process it would become in turn many rare and wonderful things, including krypton, antimony, argon, arsenic, cadmium, gallium, manganese, molybdenum, rhodium, and even silver.

Fortunately the writing of tales of imaginary science doesn’t require that the adept stick even to plausible facts, but sometimes the writers in this school of entertainment go to unnecessary pains in inventing startling ideas that are but little better than ordinary truth.

The wonderful vacuum airship, for example, would be so little better than an ordinary gas-filled fabric-covered zeppelin that if the metal hull weighed but 20,000 pounds more than a fabric bag the two would have equal lift—assuming both ships to be of approximately 2,000,000 cubic foot capacity. And the metal vacuum ship, besides being light enough to lift its load, would have to be strong enough to withstand an outside air pressure, at sea level, of something in the neighborhood of 80,000 tons.

The exact air pressure load, of course, would depend on its shape. The longer and slimmer the cigar shaped body was, the more surface would be exposed to air pressure. But for a simple calculation on air pressure on a vacuum container consider a spherical body, as a globe has the least possible surface area for any given cubical content.

A sphere of 150 feet diameter would have a content of 1,766,250 cubic feet, which is near enough to the 2,000,000 foot capacity of an average size zeppelin. As air weighs about 80 pounds per thousand cubic feet at sea level density, and a vacuum weighs nothing, 1,766,250 cubic feet would have a lifting force of 70.65 tons. Therefore the metal sphere, the cabins, food, fuel and pay load could not exceed that weight, if it were to get off the ground at sea level, and would have to be many tons lighter to rise to any height.

And after inventing a metal light enough to fly but strong enough to withstand such a pressure, the airship would have a lifting force only 17,660 pounds, or less than nine tons, better than a hydrogen filled balloon of the same size!

That enormous air pressure which rests on every square inch of everything on earth, and which we so easily forget because it is equalized inside our bodies, and therefore we do not feel it, is one of the scientific facts which pseudo-scientific writers so conveniently forget or ignore.

Inter-planetary vehicles dart back and forth between the earth and Venus, Mars and the Moon in the pages of all the magazines printing this sort of fiction. They make tremendous speed and cut voyages of millions of miles to a few hours or days because, as their writers point out, outer space is presumably a vacuum in which there is no wind resistance to their passage.

But if the outer space is a vacuum, then the air pressure within the vehicle must be maintained at ground density to enable the occupants to live, and so the problem of the vacuum airship is simply reversed. Instead of having 15 pounds to the square inch on the outside trying to crush the hull inward, we have 15 pounds to the square inch on the inside trying to blow it outward. Of the two problems the vacuum airship really presents the lesser obstacle, for a spherical metal hull will stand more compression from external pressure than it will expansion from internal strains. That’s why compression members in steel buildings and bridges present less of a problem than suspension bridge cables, which are under an expanding strain.

Of course, given sufficient power to shoot a man-carrying rocket into space, it is possible to provide sufficient power to move a vehicle with walls thick enough to withstand the strain. In all of the fiction, as well as the actual attempts to build space-traveling rockets, the presence of that power is assumed.

Another favorite field of the scientific fictioneer is inter-planetary communication by wireless with the imaginary residents of Venus, Mars, or the Moon, for even the total absence of air and water on the moon have not prevented fiction writers from peopling it with human as well as animal life.

Communication with the planets in fact has not stopped with fiction, for a man in London a year or so ago spent several weeks trying to establish contact by radio with Mars. At the same time he was breaking into the newspapers with his experiment, the British government was quietly carrying out experiments to prove that the so-called “Heaviside layer” of ionized air high over the earth—a layer named for the famous mathematician who first predicted its presence—actually deflects radio signals back to earth, and therefore explains the action of short wave signals in spanning enormous distances.

The result of that experimentation was announced just a few days ago, with conclusive proof that the ionized layer does exist at a height of about 80 kilometers, and does reflect radio signals back to earth.

While the British experiments were made solely to develop the understanding and improve the processes of world-wide communication, the result throws considerable doubt on the possibility of ever establishing communication if some intelligent form of life does exist on one of the other planets. With at least a large part of each radio signal being reflected back by a seemingly impassable or almost impassable layer of ionized air, the prospect of forcing a signal through into outer space seems negligible.

The time element and its effect on radio signals and their strength also is ignored by the writers who play with the idea of wireless to the planets. The longest distance a radio signal ever has traveled between transmitter and receiver was spanned in a minor fraction of a second, for the farthest such a signal can be sent and actually received would be around the earth, a distance of not more than 25,000 miles, which is a mere hop, skip and a jump for a radio wave traveling 186,000 miles a second, or at the speed of light. Compare that to the many seconds, or minutes, that even radio would require to span the enormous jump to one of the planets, and consider the energy required to make such a trip!

The possibility of producing sufficient power on earth to equal that given out by a star as big as the sun is so remote as to be beyond consideration, yet there is evidence that it might take power on such a scale to penetrate space with any form of signal.

Yet with all their weird and wonderful imaginings, the scientific fiction writers have left a whole field of things untouched. Astronomy offers possibilities beyond anything they have yet utilized. The mean density of the bright star Capella is about the same as pure air, so one could live at the center of it, if it wasn’t for the temperature of a few million degrees and an atmosphere composed of flying electrons. Or the faint companion star of Sirius, the dog star, has a density so great that it weighs around one ton to the cubic inch, and a pebble dropped on an imaginary inhabitant would be fatal, and a grain of sand would be a lethal weapon! If that isn’t enough van Maanen discovered a star whose spectrum indicates a relatively high surface temperature, a mass about one-seventh that of our sun, while the diameter is about that of our earth. That figures out to a corresponding density 400,000 times that of water, or a weight of seven tons to the cubic inch.