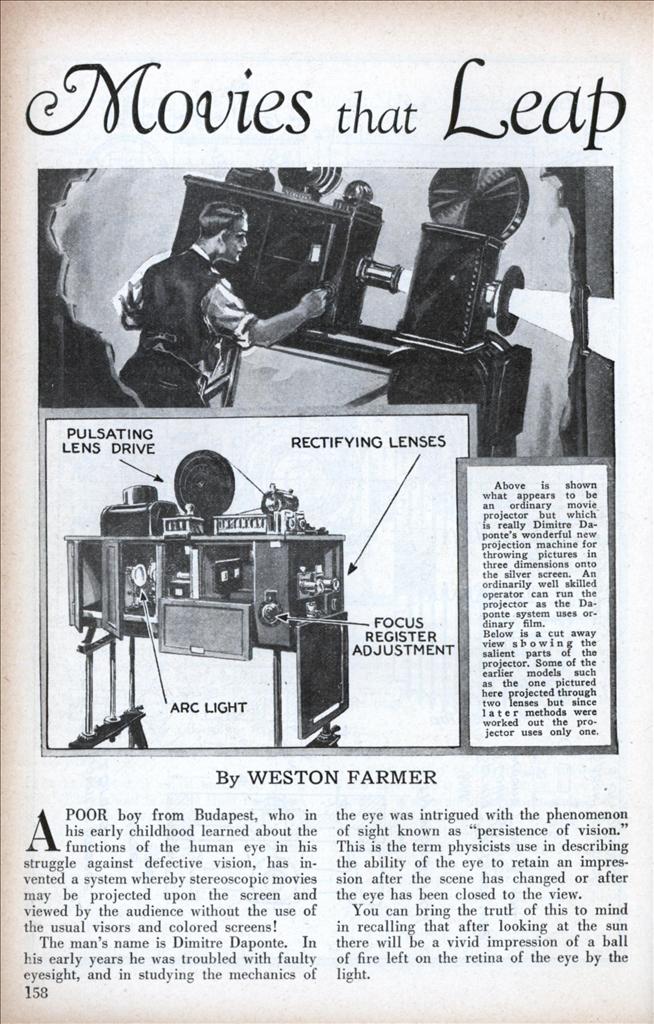 Movies that Leap From the Screen!

A POOR boy from Budapest, who in his early childhood learned about the functions of the human eye in his struggle against defective vision, has invented a system whereby stereoscopic movies may be projected upon the screen and viewed by the audience without the use of the usual visors and colored screens!

The man’s name is Dimitre Daponte. In his early years he was troubled with faulty eyesight, and in studying the mechanics of the eye was intrigued with the phenomenon of sight known as “persistence of vision.” This is the term physicists use in describing the ability of the eye to retain an impression after the scene has changed or after the eye has been closed to the view.

You can bring the truth of this to mind in recalling that after looking at the sun there will be a vivid impression of a ball of fire left on the retina of the eye by the light.

In real life the eye sees around a thing, so to speak. One eye, being set a short distance from the other sees just enough different a view to let a sort of mental triangulation take place which enables the mind to estimate distance and depth. The reason that the third dimension or dimension of depth is left out when a picture is presented on the screen is that both eyes see exactly the same view.

M. Daponte reasoned that if a camera could be made which would take two views from two points no farther apart than the distance between one’s eyes, and then re-project them so that each eye would recognize its own view, then blend them so that continuous motion could be imparted to the film, that a sterescopic motion picture would result. He was right, and recent demonstrations in London have proved his claims to the letter.

The machine devised was a combination team of a camera and projector which would follow out M. Daponte’s theory. He built a camera with two lenses spaced about two inches center to center and arranged the shutters so that first one lens and then the other took pictures of the action. Only he speeded the film up to 32 feet a second so that ordinary 16 foot per second speed would result to the eye, since it was his plan to make each eye view only its own side of the picture.

The film resulting from such a camera you can visualize as you read this page by winking first one eye and then another in rapid succession at, say, a chair, noting the difference in view.

With the resulting two strips of film there remained the problem of putting them into one reel, so that the film could be run by the average operator in various theaters. Daponte devised a projection system which is fool proof, since the dissimilar views are finally printed on a master positive. Instead of being printed side by side and projected in superposed positions on the screen, which would result only in a blur, Daponte made use of the previously explained phenomenon of the persistence of vision. He ran this master film at double speed, threw one view after the other alternately on the screen so that the eye was actually fooled into thinking it was looking at the stirring events pictured before it as though they were real life.

The diagram at the bottom of the page shows how this was accomplished with two very clever lenses which shaded the light to achieve the desired stereoscopic results in the following manner: Since the right eye focus is naturally on things with a left hand objective the left objective is quickly thrown on the screen. Then, since it is the tendency for the right eye to recognize the view quicker than the left, the left eye is greeted with a view from the right objective, cleverly and speedily blended by the pulsating lenses which fade one view into the other without any change whatever in the intensity of the light. Thus the right eye sees what it is trained to see, the left eye sees what it is trained to see, and from any portion of a motion picture house objects are made to plunge directly at the viewer, who, though he instinctively retreats, is only being fooled by a strip of film running in jerks through a projector possessing lenses which pulsate the light so as to blend one view into the other too quickly for clumsy, fallible human eyes to detect!