Popular Science
Issue: Nov, 1963
Posted in: Medical, Sign of the Times
Tags: in the future
3 Comments on Must Tomorrow’s Man Look Like This? (Nov, 1963)

I love the last line of this article. After going over the pros and cons of creating a cyborg man they hit us with:
“It we don’t, the Russians will. “
Can’t really argue with that, can we? 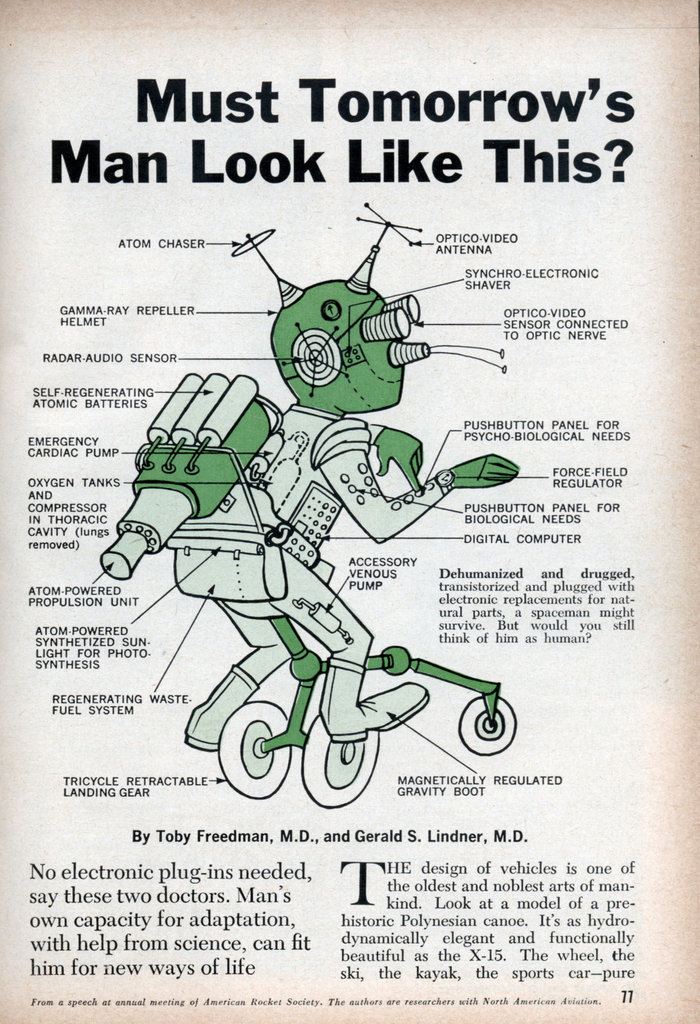 No electronic plug-ins needed, say these two doctors. Man’s own capacity for adaptation, with help from science, can fit him for new ways of life

THE design of vehicles is one of the oldest and noblest arts of mankind. Look at a model of a prehistoric Polynesian canoe. It’s as hydro-dynamically elegant and functionally beautiful as the X-15. The wheel, the ski, the kayak, the sports carâ€”pure geometry in motion. No doubt the engineers of these perfect and symmetrical structures beat their heads against the wall when told they had to squeeze in a passenger. One of the earliest recorded utterances in Samoan is the comment of a legendary canoe builder: ‘Til be damned if I make the thwart four inches wider just to fit somebody’s big fat—-” (the inscription becomes illegible at this point).

This attitude has persisted. Anyone who has tried to get out of a bucket seat while parked on a hill knows that automobile designers hate people. And airframe and spacecraft engineers obviously feel that the art would be 10 years ahead if there were some way to eliminate the pilot and human-factors personnel.

In favor of men. Now it is natural for us, as physicians, to be prejudiced in favor of human beings. But we have to admit there must be some reason for the persistence of the opposite point of view â€”that the only component that spoils the design is the human.

Why is this? The answer is simple. Every other component from nuts and bolts to rocket fuel comes in a wide variety of sizes, shapes, strengths, physical and chemical properties. The human sub-system is unfortunately manufactured in only one basic model. And the engineer is stuck with it. He can ask for a hex nut or a six-way switch, but a six-handed human is not in stock.

These are intolerable limitations. Yet up to this decade only two approaches have been used to cope with them.

The Spartan approach. We reluctantly accept the need for a pilot and provide him with a minimum life-protective system. The pilot of the X-15 is encased in an aluminized space suit in an artificial oxygen-nitrogen atmosphere and strapped into an-ejection seat which is his only escape-and-survival mechanism. Nobody asks him if he’s comfortable or if he’d like to scratch the back of his neck. The other extreme is the all-out engineering approach. The engineering department asks the human-factors group to supply a schedule of numbers, specifying the weird dimensions and feeble

mechanical properties of humans. The engineers then demonstrate their virtuosity by providing what we’ve come to call a shirt-sleeve environment. They say, “Give us your miserable requirements for those fragile, feeble creatures with their almost negligible strength/weight ratio. Integral calculus can overcome even this handicap. We’ll make a capsule with all the comforts of home.”

Up till now this has been possible, and engineering achievements have been fantastic. Jet flight is accomplished under conditions of far greater comfort than picking up your luggage at the airport. But space travel is different. Designers may no longer be able to give the traveler a replica of his earth environment. Solar-flare-radiation protection has been estimated at hundreds of pounds of lead shielding per man. This alone takes us into a new category. The medical group finds it embarrassing to keep asking for more lead every time a new radiation hazard is discovered.

Changing the model. We are forced to begin thinking about attacking the problem from the other end. Maybe we could give the astronaut a pill that would do the trick, and throw away the extra lead. In other words, instead of modifying the ship, modify the man. Simple as it sounds, a proposal like this rouses tremendous opposition. We have inherited a tradition of the natural man, the perfect physical specimen impossible to improve. Medicine has in the past confined itself to restoring the patient to this natural state and left it to cults and quacks to offer programs for developing superhuman powers.

Yet, if we look at the evidence, all over the world there are people with what are literally superhuman abilities. Tibetan lamas can maintain normal skin temperature in subzero cold. Yogis buried alive manage on a fraction of normal oxygen consumption. Eskimos thrive on a high-fat diet that would give us all cor-onaries. Peruvian Indians do heavy labor at altitudes where you and I couldn’t breathe. These remarkable adaptations have been accomplished without the benefit of science.

Tooling up. Now science, for the first time, has taken the trouble to investigate these phenomena experimentally. Trances and suspended animation, long in the same boat as the Indian rope trick, are now legitimate objects of research under the names of hypnosis and hypothermic hibernation. Research on body mechanismsâ€”cerebrospinal-fluid control and blood-content detection in the brainâ€”will almost certainly lead to an understanding and control of acclimi-tization. Then we can go to the engineers and say, “Throw away half those oxygen cylinders: Our astronaut breathes like a Peruvian.”

Man can be improved. What’s more, people have been working on it for centuries. The only difference now is that science can take a hand and speed up the process.

The problems of space travel will supply the initial impetus, and early improvements in man will be mainly designed for the astronaut. The adverse effects of weightlessness will be overcome by drugs and physical therapy. Radiation resistance will be increased by medication, hypothermia, possibly skin ointments. Tolerance to low-oxygen partial pressure and extremes in temperature and pressure will be improved. But it is obvious that such research will benefit more than the astronaut.

The public is as interested in radiation protection as the man on his way to Mars. Today a Finnish doctor has found a way to mobilize strontium 90 and expel it from the body using parathyroid extract and pilocarpine nitrate. Tomorrow people will demand a way of keeping strontium 90 out in the first place. If we synthesize energizers without side effects so that astronauts can function at peak intellectual and physical efficiency on four hours’ sleep a night, every corporation executive in the world will want the prescription. The result will be a biomedical explosion comparable to the electronics explosion of the fifties.

Options? It is really too late to ask “Can man be modified?” He is already. And will continue to be. We are beginning to make successful transplants of major organs. An English doctor is alive today with another doctor’s kidney. It’s only a question of time before such operations move out of the last-resort category. People will exchange their failing hearts and livers the way we change tires after 30,000 miles. Prosthetic devices, up till now able only to restore some meager part of original function, will become “elective improvement.”

How would you like a hand, quite natural looking, just as responsive to your brain as your present hand, but able to twist off the cap of a pickle jar unaided? How would you like to be able to apply a compressive force of several thousand p.s.i., to play six-note chords on the piano, to have fingers with interchangeable screwdriver ends? Nothing to it. The Russians are working on it right now: a “biohand,” operated by the owner’s own nerves and muscles.

We will be able to modify man. The questions are: “What modifications are desirable?” and “Should we do it at all?” The possibilities and dangers involved will make our present problems seem trivial.

While wishful supporters of the natural man doubt the possibility of lowering oxygen requirements by chemical agents, work has already started on the study of the giant octopus which converts from oxygen metabolism to a system requiring no oxygen at all at extreme ocean depths. If the octopus, why not man? The moment we say some biological adaptation is impossible, we find it somewhere in the animal kingdom, if not in a Himalayan monastery.

It isn’t the science-fiction fantasists who are being unrealistic, but conservative scientists. Two lines of research are advancing at a great rate. Farthest ahead is the bio-mechanical or bio-electronic approach, which would supplement or supplant body functions with mechanical or electronic aids.

More profound is the biological approach, which seeks to understand adaptive mechanisms in other forms of life and apply them to man. Instead of hooking up a transistorized organ, the object here is to enable the subject to grow one. This is not as inaccessible as it sounds. Remove one kidney and the other one grows large to sustain the load.

Wonders or horrors? What guide can we look for to direct us in the development of these new powers? For if we can raise people’s general performance with stimulants, we can also reduce them to automatons with depressants, and dissociate them with hallucinating drugs. We can interchange their organs or intercept their heredity by scrambling their DNA. In short, we can alter them in any direction, letting loose in the world forces more powerful and menacing than anything that came out of the atom.

As in the case of the atom, are we going to back into this and find ourselves facing catastrophe without a policy? I have no answers to this questionâ€”simply a plea that we start thinking about it.

Let us plan to improve man as we modify him. Let us, while taking over from nature, follow her lead. The keynote is gradual improvement. We should try to optimize those capacities and abilities man already has, by all means available, but avoid radically tampering with the basic mechanism.

In contrast to the astronaut who accomplishes his space mission at the cost of trading most of his physiological systems for electronic ones, whose mouth is sealed, his lungs collapsed, his body wastes recycled through himself, his neural pathways partly severed, and his emotions dissected outâ€”we see another. We envision a man who looks quite normal, but who has been adapted to the oxygen requirements of a Himalayan Sherpa, the heat resistance of a walker-on-coals; who needs less food than a hermit, has the strength of Sonny Liston, and runs the mile in three, minutes flat while solving problems in tensor analysis in his head. We call him Optiman, and we think we can make him in the near future.

It we don’t, the Russians will.