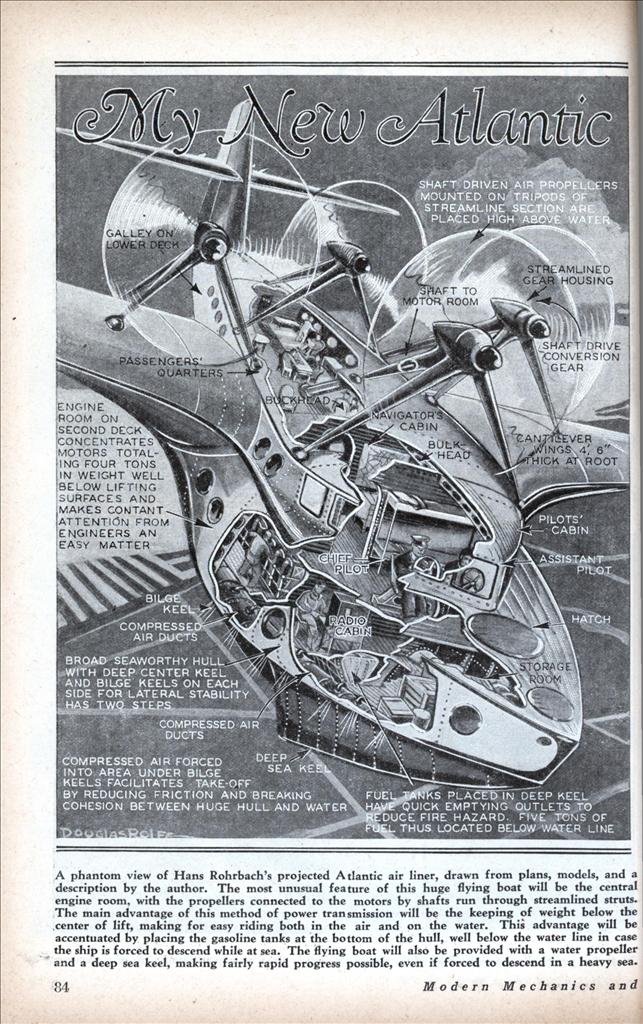 The name of Rohrbach is well known in the aviation world because of the giant planes which he has designed. He built 5,500 airplanes for the German army during the World War, including four giant bombers with eight engines each. Since then he has designed most of the large European transport planes used on passenger lines.

THE conquest of the Atlantic by air, both from America to Europe and Europe to America, has become almost a commonplace since Col. Lindbergh’s great flight. But, as a recent article in Modern Mechanics pointed out, there is no airplane built today capable of flying the ocean non-stop while carrying a sufficient payload of passengers and freight to make the trip financially worth while.

For a non-stop trans-ocean air line a flying boat is needed, one 30 built that it can land at sea, ride out bad weather, and, in event of damage to the wings or tail surfaces, navigate to shore under the power of a marine propeller. It must have speed sufficient to make the crossing in a reasonable number of hours, excess fuel capacity to give a wide safety margin, and sufficient load capacity to accommodate enough passengers so that the fees received will pay expenses and profits.

I have designed such a ship, a thirty passenger flying boat that is radically different from anything yet built, but based, as I will demonstrate, on sound technical facts.

As designer to the German government during the war, when some 5,500 airplanes were built under royalty rights from me, and as chief engineer of the Rohrbach all-metal airplane factory, which produced the Roland, Rocco and Romar ships—the latter a giant three engines flying boat—I have had considerable experience with this type of craft.

But all big flying boats yet built, from such craft as the two-engined Rocco to the twelve-motored DO-X have one serious defect, in my eyes. Their engines are placed, to keep them from getting wet, high above the wings, in a position impossible to work on during flight, in a place where they, with their supporting jacks, create enormous wind resistance, and at a point where an enormous weight is concentrated far above the ship’s center of gravity.

To offset this disadvantage I have designed a flying boat with four engines placed deep down in the hull, actually below the water line. Above the wing and fuselage, the four propellers are supported on stream-lined jacks, with shaft drive from the engines down in the hull. Four tons of motors and five tons of fuel are thus concentrated where the weight belongs, at the lowest possible point below the wings, and the center of gravity of the engines is lowered by at least five yards. All the wind resistance of the motors, and most of the resistance due to the supporting motor structure, is thus removed.

Next, I have eliminated the cumbersome pontoons and their supporting structure, placed under the wings of all big flying boats to give them lateral stability. Not only have J I eliminated their weight and their wind resistance, but I have likewise done away with the strains on the wing structure caused by seas striking these supporting pontoons.

They are not needed on my ship because I have broadened the hull, fitted it with a deep sea keel, and with side, or bilge keels, like those on some big sailing ships, only even more pronounced. The width of the hull and the keel arrangement gives it ample lateral stability without supports under the wings. Getting such a wide hull off the water offers no particular difficulty, because compressed air from the engine room can be injected into the space between the true keel and the side keels, reducing friction to the minimum and breaking the cohesion between hull and water.

Some people may question the practicability of the shaft drive for aerial propellers.

Actually there is nothing so revolutionary .about it. It has been the practice for a long time in planes with extremely high powered engines to gear the propeller down, permitting use of a slow, high efficiency, air screw, so the gear problem is not new. And shafts of length equal to those I propose are in common use in large trucks and extremely powerful speed boats, where, in the latter ease, they have been used to transmit power from 1,000 h.p. engines, larger than the •800 h.p. B.M.W. motors I propose to use. Hollow steel tube shafts on large trucks are subjected to enormous shocks, yet come through without distortion.

Placing the motors in line deep down in the hull also permits use of a marine propeller, geared to the rear engine, where it can be used for taxiing in harbors, as an aid in getting under way before taking to the air, and as an emergency safeguard in event of a forced landing at sea under conditions preventing the ship taking the air again. The first step in the hull is just at the rear of the engine room, so it will be a simple matter to prolong the shaft of the rear engine and provide for the marine propeller and gear. Owing to the slight draught of the boat and the high power of 800 h.p. a high cruising speed can be developed on the water, giving quick acceleration and cutting down the space needed for a take-off run.

Some designers have questioned .the placing of motors and fuel within the hull on the ground of fire hazard. Actually there is no more danger than with any other arrangement. Quick emptying tanks as a protection against fire are in common use, and such tanks would be fitted so that, by means of flap valves, they can be emptied almost instantaneously. The chief reliance, however, would be a good fire extinguishing apparatus, plus a horizontal bulkhead or fire wall. Most ocean going liners nowadays are fitted with complete carbon dioxide fire extinguishing apparatus in every compartment, with controls both automatic and manually operated, and the same system would be fitted here. The ceiling of the engine room, which has six foot headroom, enabling the mechanics to work on the engines during flight, would act both as fire wall and the inner wall of a double bottom. In event of rupture of the outside hull the engine room can be turned instantly into an air tight compartment.

The hull as I have designed it approaches very closely to the standard practices of ordinary sea going ship building. The engines, for example, rest on the keel members, instead of on special engine beds, thus permitting a considerable saving in weight. Their position permits the engineers and oilers to go about their tasks just as they would on a ship at sea.

As designed the ship will weigh approximately 33,000 pounds and carry a load of fuel, crew, passengers, baggage and supplies of 44,000 pounds, or a total weight of about 38% tons. Of this approximately 6,600 pounds is assigned to passengers and luggage, or to mails and freight, 33,000 pounds to fuel, and the rest to supplies, equipment and the crew of five men.

That is sufficient for a non-stop flight from New York to London or Paris, or, by stopping for fuel at one of the Newfoundland ports to replenish gasoline consumed to that point, the range can be considerably extended.

The hull has two levels, with the engine room, wireless cabin and kitchen below and the pilot’s and navigator’s compartments, passenger and supply space above. The wireless cabin is placed in the bow, separated from the engine room by a solid, insulated wall. Over it is the pilot and navigation rooms, and behind them the passenger compartment, with accommodations for thirty people, and back of that the baggage and supply compartments.

The wings, of cantilever type and tapered form, have a thickness of 4% feet where they join the body, and a depth at the same point of 39 feet, tapering toward the outer end in a V-figure of about 3.5 degrees. The ailerons are 27 feet long.

The crew of five includes two pilots and a navigation officer, an engineer and a wireless operator. Duralumin will be employed throughout, with the exception of some parts which require high test structural steels.

The ship is for me the culmination of a life-time of airplane building. At 17, when I entered a technical college, I spent most of my time building airplanes, and, as far back as 1911 a friend, who was later killed in the war, and I had a home-built plane in the air. We even built our own motor, a five cylinder rotary of French design. After these experiments, at 19, I spent several months in America, working in New York, Pittsburgh and Philadelphia, and acquiring more experience. Returning to Germany, another friend and I built a big biplane and made our first test flight in 1912 with five passengers as a load. A short time later I was chief construction engineer of the big DFW airplant factory at Leipsig, until I left there to enlist as a flyer at the outbreak of the war. While I was at the front 5,500 German planes were built-to my plans, and on each I received a royalty of 100 marks, but all of it went into war loans and was entirely lost.

In 1918 I was recalled from the front to rejoin DFW and build giant bombers for them. We turned out four, each with eight . 300-h.p. engines, and to this day I don’t think a better plane has been produced, though, unfortunately, all four were shot down or otherwise destroyed on the Russian front.

Getting back to giant airplane designing is just a return to my first love, and if, as I hope, I build the first practical trans-Atlantic air liner, my goal will have been reached.