Modern Mechanix
Issue: May, 1930
Posted in: Aviation
8 Comments on My New Dirigible on Pontoons (May, 1930) 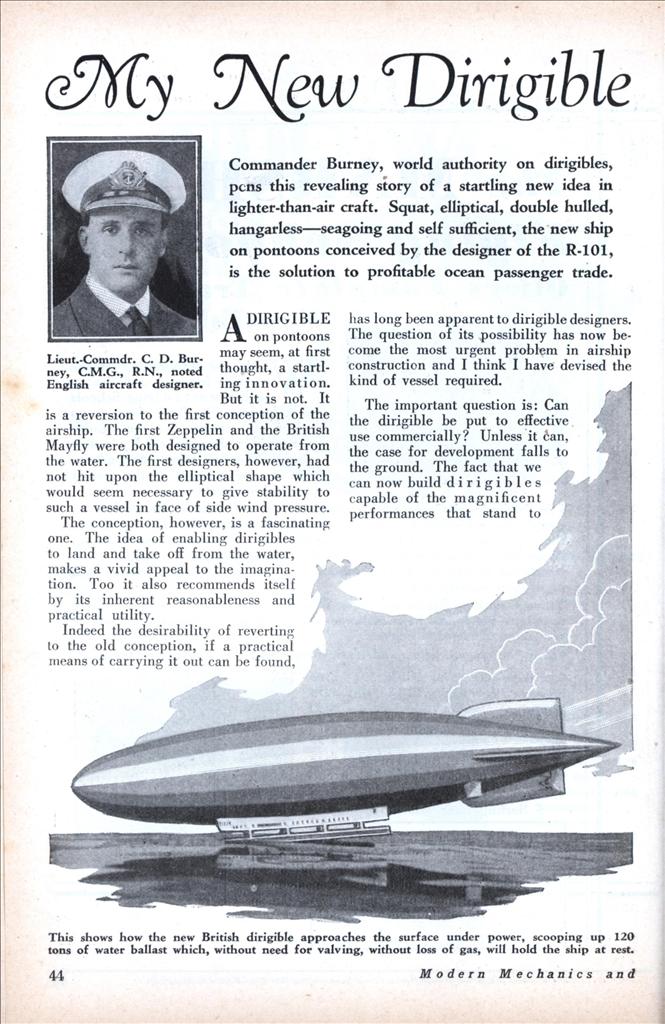 My New Dirigible on Pontoons

Commander Burney, world authority on dirigibles, pens this revealing story of a startling new idea in lighter-than-air craft. Squat, elliptical, double hulled, hangarless—seagoing and self sufficient, the new ship on pontoons conceived by the designer of the R-101, is the solution to profitable ocean passenger trade.

A DIRIGIBLE on pontoons may seem, at first thought, a startling innovation. But it is not. It is a reversion to the first conception of the airship. The first Zeppelin and the British Mayfly were both designed to operate from the water. The first designers, however, had not hit upon the elliptical shape which would seem necessary to give stability to such a vessel in face of side wind pressure.

The conception, however, is a fascinating one. The idea of enabling dirigibles to land and take off from the water, makes a vivid appeal to the imagination. Too it also recommends itself by its inherent reasonableness and practical utility.

Indeed the desirability of reverting to the old conception, if a practical means of carrying it out can be found, has long been apparent to dirigible designers. The question of its possibility has now become the most urgent problem in airship construction and I think I have devised the kind of vessel required.

The important question is: Can the dirigible be put to effective use commercially? Unless it can, the case for development falls to the ground. The fact that we can now build dirigibles capable of the magnificent performances that stand to the credit of the Graf Zeppelin and can be anticipated from the British R101 and the R100, does not necessarily mean that it is worth our while to do so. The modern dirigible undoubtedly marks a great technical achievement. But that is not enough to justify its existence. It must, like any other technical invention, be able to pay its way commercially.

The dirigible as at present designed does not fulfil all the requirements of a commercial vehicle. To begin with the dirigible can only make a landing at a specially prepared base. This means that engine trouble or other misadventure may be very serious indeed, particularly if it happens some hundreds of miles distant from the nearest base. The experience of the Graf Zeppelin in her attempted flight across the Atlantic in May, 1929, is a case in point. The ship’s engines broke down, and it was with the greatest difficulty that she managed to get back in safety. It is quite clear that so long as these conditions obtain, it will only be possible to run a regular airship service on: a route with sufficient air traffic to pay the cost of erecting frequent intermediate bases.

There is the additional fact that the mooring and docking of airships is, at present, an exceedingly difficult and expensive operation. The ship has first of all to be moored at a mooring mast—an elaborate structure which costs a great deal to erect; and may have to wait some days in this position before the direction of the wind permits docking in the hangar. Nor is this all. As the dirigible can only be handled by manpower, the actual operation necessitates the employment of several hundred men in the ground crew, who have to stand by for the purpose. The mooring and docking raft idea, which we devised at Howden during the building of the R100, will, I think, pro- vide a practical solution to this difficulty. But the first difficulty of landing, except at a base specially prepared to receive her, still remains. And it is quite certain that this will never be overcome so long as airships can only operate on land. They must be made to operate from the water as well.

The problem that lies before us is how to re-design dirigibles so that they will be able to come down in the manner of a flying boat and be moored to a buoy or lie at anchor like a marine vessel. I think that it is technically possible to construct an air-ship of the type suggested. The design which I have recently worked out, has passed preliminary model tests so satisfactorily as to leave little doubt about the practicability of the conception. A full description of my proposed new dirigible pontoons is contained in my book, “The World, the Air and the Future.” All I can do here is to touch briefly on its salient points. The accompanying illustrations show the model in various moments of operation and give some idea of the shape of the ship and of method of control.

The basic idea of the new pontoon-equipped dirigible is to enable it to land at unprepared places. Our object is to keep the ship under dynamic control by means of rudders and elevators, until it can be securely held, and is no longer in danger of being blown over by a side wind. To achieve this, two long floats, similar to the hulls of flying boats, but much larger, were constructed under midship. These are fitted with ballast tanks, and fixed to the hull, as far apart in a transverse direction as possible. At the same time the section is altered from the standard circular to an elliptical section. This reduces the overall height and lessens resistance to side winds. It also increases the dynamic lift at a given speed, and by enabling the boat hull to be more widely spread, increases the righting moment of the floats.

A side wind of 35 m.p.h. exerts a force of just under 120 tons upon the ship’s side. If it is to maintain equilibrium in a side wind of this velocity, we shall require one of the boat hulls to push up with not less than 120 tons. Each float must, therefore, have a buoyancy of more than 120 tons and, at the same time, acquire an actual weight of 120 tons. Accordingly, as the ship lands on the water, the ballast tanks in the hulls will be automatically filled with 120 tons of water by means of scoops, and as soon as they are full, it can be stopped. It will then float stably on the boat hulls and can be moored to a buoy.

Now since the ship is being held down solely by the weight of water through the automatic filling of the ballast tanks, it will be at once realized that, as soon as the sluices in these tanks are opened, the dirigible will rise again. And here we come to an important advantage connected with this part of my pontoon-equipped dirigible. With the normal ship, it would be necessary to release gas in order to bring it down from flying level. The attachment of the floats, however, makes it possible to drive the ship down by the engines, which means that it can conserve gas, and is enabled to resume flying height without discharge of ballast. In other words, the ship is in this way given the mobility and ease of handling of the flying boat, while retaining its own specific advantages of great range and buoyancy.

There are, of course, many minor problems connected with the development of the new dirigible. The advantages of the “ellip- tical ship by no means stop at mooring and handling. Owing to greater width of beam, it will have at any given speed a greater dynamic lift and therefore less difficulty in maintaining an approximately even keel in the air than is the case with a circular vessel. Again, as it will be able to dispense with the greater part of the ballast now carried, the equivalent weight of this can be added to the pay load. Nor must we forget the all-important question of size. A helpful factor in the construction of dirigibles is that efficiency increases with size. Hitherto, it has been impossible to increase size to any great extent, owing to the difficulty of handling and the fact they cannot make an unpremeditated landing. In the case of the pontoon-equipped ship, however, these hindrances will be removed, and it will be possible to build a ship of twice or even three times the capacity of R100 or R101.

I have already examined the possibility of building an elliptical ship with a displacement of 450 tons, and there would seem to be no technical reason against it. On the other hand, the construction of so gigantic a vessel would be too great a step to take in one stride. It would be better, I think, to contemplate a 350-ton ship as a reasonable first step in the new development. Such a dirigible, whose displacement would be considerably more than double that of the largest airship yet built, would have a range of from 5000 to 7000 miles at a cruising speed of from 90 to 100 miles an hour.

Needless to say, I make no claim that this idea I have developed represents the best or the only conceivable method of designing a dirigible that can operate from water! What I do claim is that it is perfectly sound in theory and that it is the only type of design yet advanced that provides a fundamental solution to the all important landing problem. In a word, if a sound dirigible can be built on this principle, it will be able to alight and moor without extraneous ,aid and at places where no preparations have been made to receive it. Such a ship will have a commercial value which no amount of partisan fervor can fairly claim for the present day dirigible.