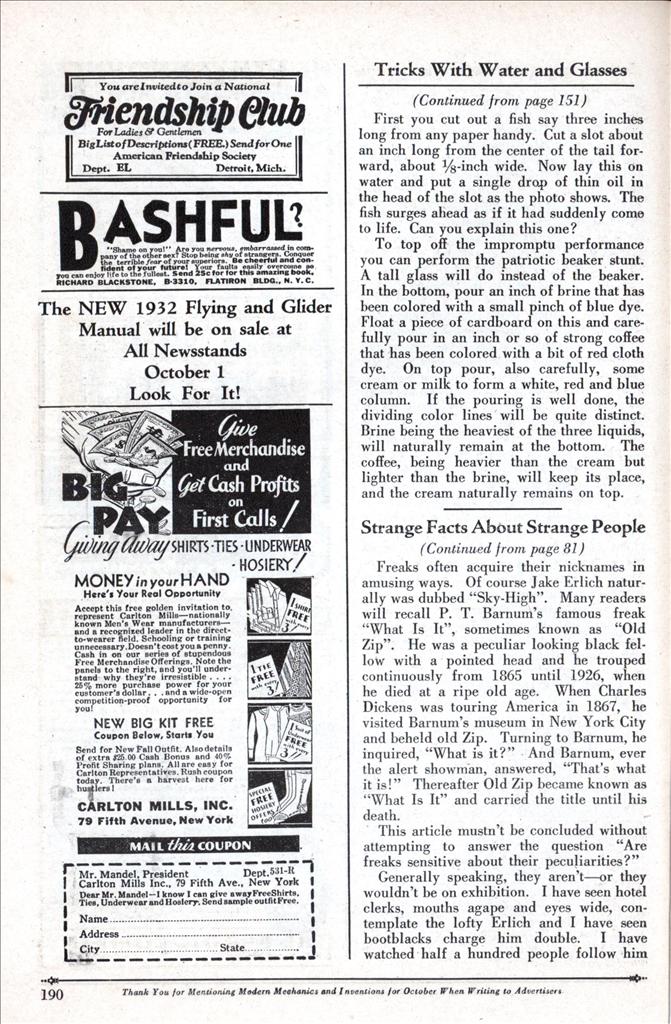 Mystifying Tricks with Water and Glasses

For entertainment at a party or after dinner you can’t beat these simple tricks, performed with water and glasses. Though they may seem extremely easy, they will sure make spectators sit up and take notice.

THE dinner was over. Talk lagged for a moment. Suddenly Dick, who was playing with his half emptied tumbler, said, “Who can float a needle on water?”

No one answered for a moment, then— “It can’t be done,” said someone. A chorus of “Noes” backed him up. Dick said nothing, but proceeded to prove it could be done. He produced a cigarette paper, asked for a needle, poured some more water in his glass, and then did the stunt. The paper was first floated on the water. Dick rubbed the needle between thumb and finger for a bit to coat it slightly with oil, then he carefully laid the needle on the paper. After a few moments the water soaked through the paper, which sank below the surface, and there, as buoyant as you please, floated the needle.

That’s an old stunt, but a good one to start other table experiments. And no sooner had the feat been accomplished than another guest thought of the suspended egg trick and did that. The method he used, and other tricks performed that evening, are described below.

The suspended egg trick calls for some salt, a glass, water and a fresh egg. Pour two inches of water into a tall tumbler and make a saturated salt solution by dissolving all the salt the water will hold. Let this stand a moment, then cut and place a small cardboard disc on top of the brine. Pour onto this enough fresh water to bring the level up to within 1-1/2 inches of the top. Now if you carefully slip the egg into the liquid it will sink through the fresh water but float on the brine, and as the two liquids cannot be told apart, this produces a rather spectacular result, particularly if the brine is prepared in advance and the glass brought in already prepared.

Here’s another, using a glass and two pennies. The tumbler should be about half full of water. Place the two pennies carefully balanced on the tumbler rim, opposite each other. The trick here lies in removing the coins at the same time without moving the glass and so that the coins are in one hand. To do this, place the tip of your index ringer on one coin, your second finger tip on the other. Then slide the coins down the inside of the glass, snap them together at the bottom, and bring them up and into your hand side by side.

For true deception, the chain link stunt is a little more difficult, and for best results should be performed a little distance from the audience. This trick calls for a tumbler, a piece of mirror cut to such shape that it will stand on edge within the glass and divide it into two parts, and some paper clips. These, and a button hook or similar contrivance. For best results, the mirror should be silvered on both sides.

Holding the glass in your hand, pass the paper clips out through the crowd, one to a person. These are collected and returned to you. Drop them back into the glass again. By deft turning of the glass you reverse its position so that now the back side is shown. In this compartment has been previously placed an equal number of the clips, but fastened together to form a link chain. Any suitable chatter will suffice, after which you dip in with the button hook, and remove the chain, link fastened to link! Of course the unlinked clips are hidden behind the mirror.

Here is a stunt that seems impossible, until you prove that it can be done. Place three glasses of equal height on the table before you, and provide a piece of paper about 5 inches wide and 7 or 8 inches long. Ask someone to lay the paper across one of the glasses in such a way that the two other tumblers can be supported on it. Ordinary heavy writing or typewriter paper will do.

Fold the paper back and forth to form pleats from end to end, each about 3/8 of an inch wide. Draw this out a little to form a series of angles, lay the now strengthened paper across the tumbler and set the other two upon it. If this trick is done a time or two in private there will be no going amiss in public.

Requiring only an instant’s preparation, the mystic cross trick is quite spectacular. The performer calmly burns a bit of crumpled newspaper over his plate and rubs the ashes on the back of his hand. As if by magic there appears a dark cross.

It will work every time. Here’s how: Slip from the room beforehand on any pretext. Moisten one corner of a bar of soap and with it, mark the lines of the cross on the back of your hand. It won’t show at all. When you wad up the paper and burn it, make some senseless passes, seasoned with any appropriate chatter to help the deception along. Then blow out the flame and merely rub the ashes oyer the soap-marked area and dust off the loose particles. This is a hard one to fathom.

Can you pour water into a glass upside down? It’s easy. Pour some water into a plate or shallow dish and on it float a small piece of cardboard or wood. On this place a well packed wad of dry paper and touch a lighted match to it. Then turn a glass over it upside down. As the paper burns, the oxygen in the air within the glass is consumed, and water is forced up into the glass to displace the used gas.

Here is an amusing trick.

First you cut out a fish say three inches long from any paper handy. Cut a slot about an inch long from the center of the tail forward, about 1/8-inch wide. Now lay this on water and put a single drop of thin oil in the head of the slot as the photo shows. The fish surges ahead as if it had suddenly come to life. Can you explain this one?

To top off the impromptu performance you can perform the patriotic beaker stunt. A tall glass will do instead of the beaker. In the bottom, pour an inch of brine that has been colored with a small pinch of blue dye. Float a piece of cardboard on this and carefully pour in an inch or so of strong coffee that has been colored with a bit of red cloth dye. On top pour, also carefully, some cream or milk to form a white, red and blue column. If the pouring is well done, the dividing color lines will be quite distinct. Brine being the heaviest of the three liquids, will naturally remain at the bottom. The coffee, being heavier than the cream but lighter than the brine, will keep its place, and the cream naturally remains on top.