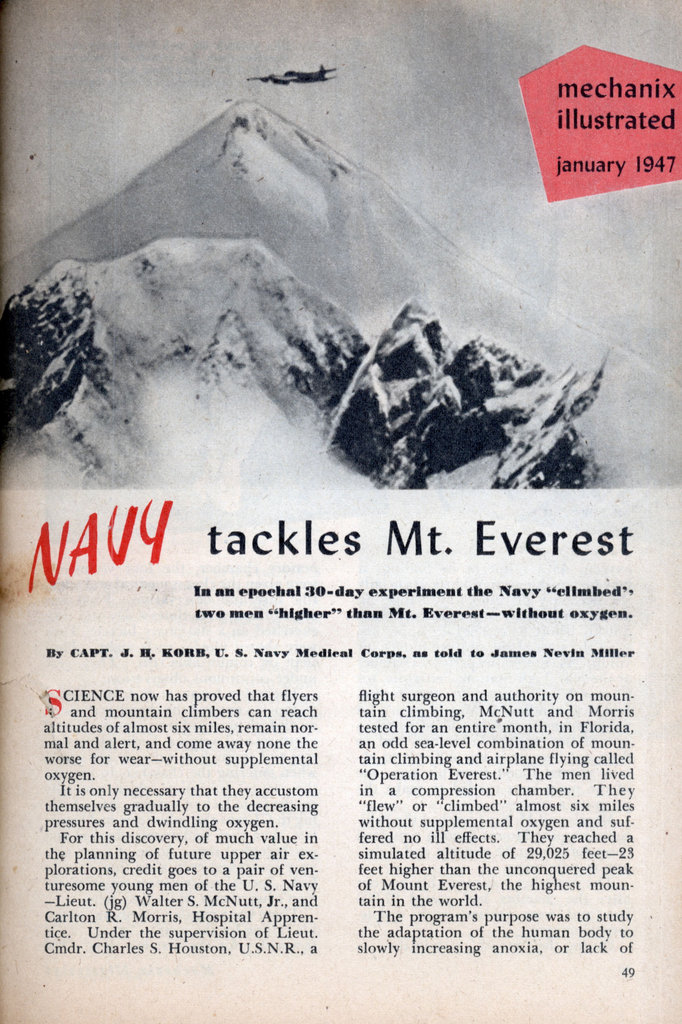 SCIENCE now has proved that flyers and mountain climbers can reach altitudes of almost six miles, remain normal and alert, and come away none the worse for wear—without supplemental oxygen.

It is only necessary that they accustom themselves gradually to the decreasing pressures and dwindling oxygen.

For this discovery, of much value in the planning of future upper air explorations, credit goes to a pair of venturesome young men of the U. S. Navy —Lieut, (jg) Walter S. McNutt, Jr., and Carlton R. Morris, Hospital Apprentice. Under the supervision of Lieut. Cmdr. Charles S. Houston, U.S.N.R., aflight surgeon and authority on mountain climbing, McNutt and Morris tested for an entire month, in Florida, an odd sea-level combination of mountain climbing and airplane flying called “Operation Everest.” The men lived in a compression chamber. They “flew” or “climbed” almost six miles without supplemental oxygen and suffered no ill effects. They reached a simulated altitude of 29,025 feet-23 feet higher than the unconquered peak of Mount Everest, the highest mountain in the world.

The program’s purpose was to study the adaptation of the human body to slowly increasing anoxia, or lack ofoxygen. As a result of its findings it may be possible to reproduce artificially the necessary physiological changes in an aviator in order to “acclimatize” him quickly before he reaches the upper air.

At the start of the venture four Navy volunteers entered the pressure chamber at the Naval Air Station, Pensacola, for a month’s exposure to the record-breaking conditions. Morris wasn’t on the regular “team,” but filled in when one of the original volunteers had to drop out because it was difficult to obtain arterial blood from his arm—one of the main tests needed to make the program a success.

The two other volunteers blacked out after the chamber had passed 27,000 feet and were revived with supplemental oxygen.

During their month’s stay in the lab-oratory chamber, the four volunteers were given the closest medical and scientific care and observation. Food was served them three times a day and they exercised on a stationary bicycle. They were shown movies each night. They slept on comfortable cots. They were under continuous observation.

Their day began at 6 A.M. when technician entered the chamber through an air lock to record temperatures, blood pressures and weights. Technicians, doctors and researchers wore oxygen masks when entering the chamber, to prevent the mental confusion which normally results from lack of oxygen. After bathing in GI cans the volunteers had breakfast, then they underwent physical and psychological tests. Some of these tests were continued even after they went to bed. Special contrivances recorded the men’s heartbeats while they slept.

There was a regular “climbing” schedule calling for the men to “go up” 2,000 feet a day for the first five days, 1,000feet a day from the sixth to the twentieth days and 500 feet a day thereafter.

Both men lost a little weight, but they emerged in tip-top shape, in large part due to strict diet control.

The test chamber was really something to see. It was of steel, about 20 feet long and perhaps 10 feet in diameter, with two doors about six feet apart in one end. Technicians and observers who entered the chamber did so by way of a small lock, remaining there until its air was reduced to the same pressure as that of the volunteers; and when they left the process was reversed. The chamber bristled with control appliances and was operated by a 14-man crew of experts.

It was interesting to watch McNutt and Morris as they “climbed” to their record-breaking height of 29,025 feet on the next to the last day. When they reached this height their blue complexions turned to a rather deep purple. (If this sounds a bit wild, let me explainthat men start to turn blue in the face after they’ve been exposed to heights of about 13,000 feet without supplemental oxygen.) At this point they were breathing heavily and looked definitely uncomfortable; but they stayed there without supplemental oxygen for four hours.

Other high altitude physiological studies are sure to follow this initial effort, for with airplanes reaching ever higher speeds and altitudes, means must be found to live through the failure of pressurized cabins or oxygen gear.