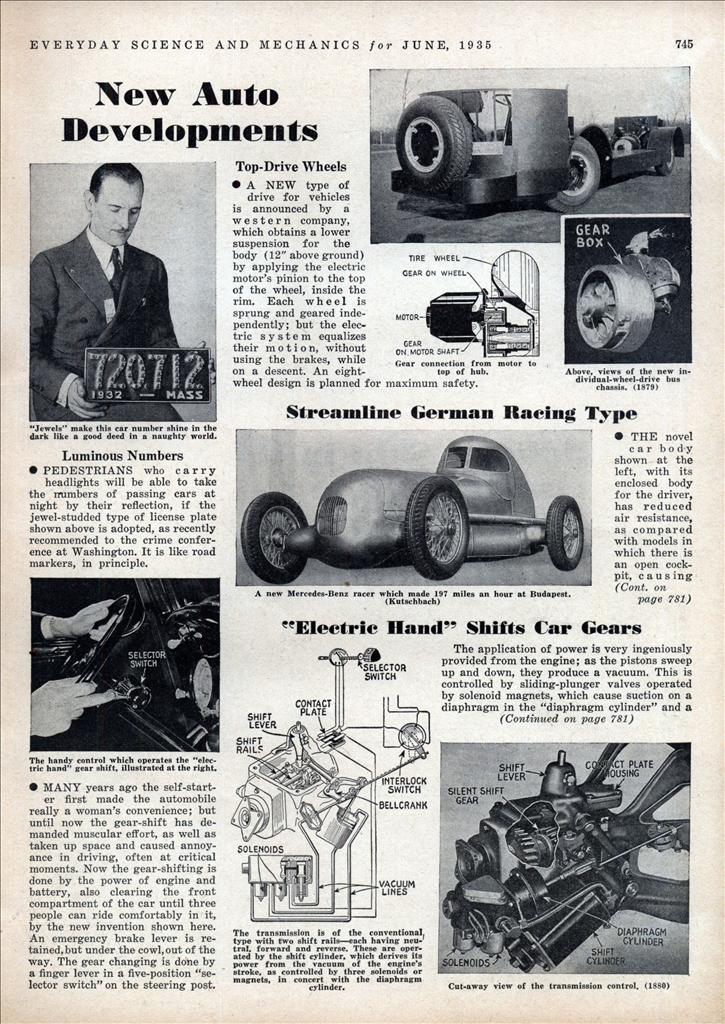 Top-Drive Wheels
A NEW type of drive for vehicles is announced by a western company, which obtains a lower suspension for the body (12″ above ground) by applying the electric motor’s pinion to the top of the wheel, inside the rim. Each wheel is sprung and geared independently; but the electric system equalizes their motion, without using the brakes, while on a descent. An eight-wheel design is planned for maximum safety.

Luminous Numbers
PEDESTRIANS who carry headlights will be able to take the numbers of passing cars at night by their reflection, if the jewel-studded type of license plate shown above is adopted, as recently recommended to the crime conference at Washington. It is like road markers, in principle.

Streamline German Racing Type
THE novel car body shown at the left, with its enclosed body for the driver, has reduced air resistance, as compared with models in which there is an open cockpit, causing air drag. It is a 270-horsepower machine, but weighs only 1650 pounds without tires, fuel, etc. Its inventor, the late Dr. Hans Nibel, developed also the heavy-oil motors of the newest Zeppelins.

“Electric Hand” Shifts Car Gears
MANY years ago the self-starter first made the automobile really a woman’s convenience; but until now the gear-shift has demanded muscular effort, as well as taken up space and caused annoyance in driving, often at critical moments. Now the gear-shifting is done by the power of engine and battery, also clearing the front compartment of the car until three people can ride comfortably in it, by the new invention shown here. An emergency brake lever is retained, but under the cowl, out of the way. The gear changing is done by a finger lever in a five-position “selector switch” on the steering post.

The application of power is very ingeniously provided from the engine; as the pistons sweep up and down, they produce a vacuum. This is controlled by sliding-plunger valves operated by solenoid magnets, which cause suction on a diaphragm in the “diaphragm cylinder” and a piston in the “shift cylinder.” The latter, which is larger, controls the shift lever on the transmission assembly; the diaphragm cylinder, by the aid of a rod, selects the operation which the shift lever is to perform, just as it would be moved by hand in the old models. This is governed by the electric circuits which the selector switch controls through the “interlock switch”; the positions of the lever on the selector switch correspond, in miniature, to those on the old-fashioned gear shift, but require only the pressure of a finger to accomplish.