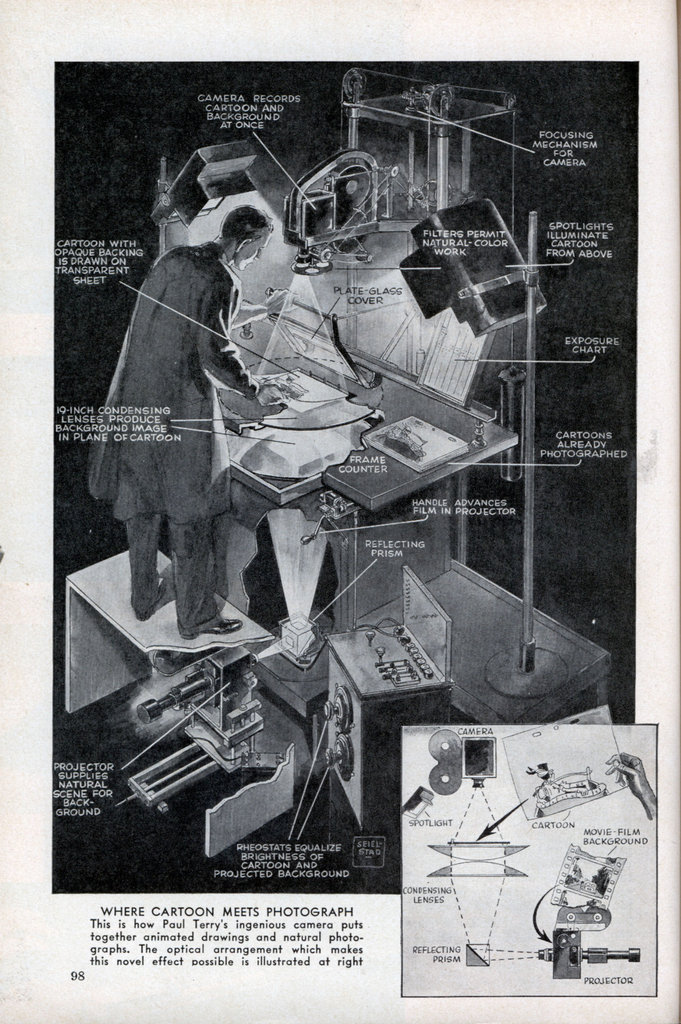 A REAL car with a flesh-and-blood driver rolls sedately along a busy city street.
Careening behind it, a caricature of an Indian in a speeding jallopy performs antics that would whiten the hair of a traffic cop. Trick photography produces animated movie cartoons of this novel sort, combining hand-drawn characters with natural backgrounds, in the studio of Paul Terry at New Rochelle, N. Y.

In making the 6,000 separate cartoons that go into a typical 500-foot animated film, the artist uses a special procedure. Each figure or object is drawn on top of an opaque silhouette, of black or white pigment, applied to a transparent sheet of celluloid. Hold it up against the, light, and you will see only the black outline of a figure; by reflected light, its details appear. So each cartoon receives the illumination of a pair of spotlights, from above, while a stop-motion camera photographs it. Meanwhile the opaque cartoon effectively blocks out the unwanted part of a real movie scene, which is projected from below through the transparent part of the celluloid. The rest of the background automatically is photographed with the cartoon, giving a composite picture. For each succeeding frame, the same procedure is used, after cartoons and background scenes have been shifted.

Simple as the scheme may appear in principle, its practical realization required an optical set-up so original that it has been awarded a patent. To match the size of an artist’s drawing, background pictures on standard movie film had to be greatly enlarged. Through the reflecting prism illustratedâ€”which simply serves, like a mirror, as a space-saving deviceâ€”a projector could have thrown the film image upon a screen of ground glass. By scattering the light, however, the screen would make the system relatively inefficient and slow. Therefore Terry substituted a huge pair of nineteen-inch condensing lenses, the most costly part of the whole apparatus, for the ground glass. They form a brilliant “invisible” image which can be seen only by the camera’s lens, or by placing the eye in exactly the same position, unless a translucent screen is temporarily inserted for focusing. Since this background image can be adjusted to fall exactly at the level of the cartoon, the camera easily brings both to a sharp focus. Light-regulating controls adjust the illumination from spotlights and projector until they balance, and all is ready for picture making.

Rapid and economical, the new process will make animated cartoons either in black and white or in full color. For the latter purpose, a set of color-separating filters occupies a rotating mount over the lens. Every full-color drawing, with its corresponding background of color film, is then photographed through each filter in turn.