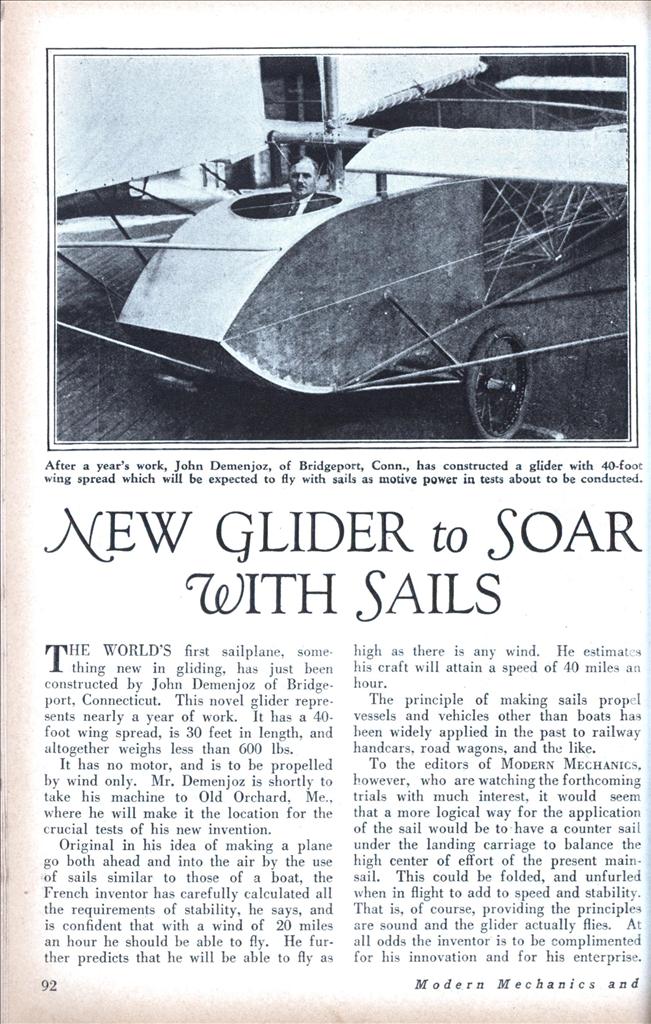 New Glider to Soar With Sails

THE WORLD’S first sailplane, something new in gliding, has just been constructed by John Demenjoz of Bridgeport, Connecticut. This novel glider represents nearly a year of work. It has a 40-foot wing spread, is 30 feet in length, and altogether weighs less than 600 lbs.

It has no motor, and is to be propelled by wind only. Mr. Demenjoz is shortly to take his machine to Old Orchard, Me., where he will make it the location for the crucial tests of his new invention.

Original in his idea of making a plane go both ahead and into the air by the use of sails similar to those of a boat, the French inventor has carefully calculated all the requirements of stability, he says, and is confident that with a wind of 20 miles an hour he should be able to fly. He further predicts that he will be able to fly as high as there is any wind. He estimates his craft will attain a speed of 40 miles an hour.

The principle of making sails propel vessels and vehicles other than boats has been widely applied in the past to railway handcars, road wagons, and the like.

To the editors of Modern Mechanics, however, who are watching the forthcoming trials with much interest, it would seem that a more logical way for the application of the sail would be to have a counter sail under the landing carriage to balance the high center of effort of the present mainsail. This could be folded, and unfurled when in flight to add to speed and stability. That is, of course, providing the principles are sound and the glider actually flies. At all odds the inventor is to be complimented for his innovation and for his enterprise.