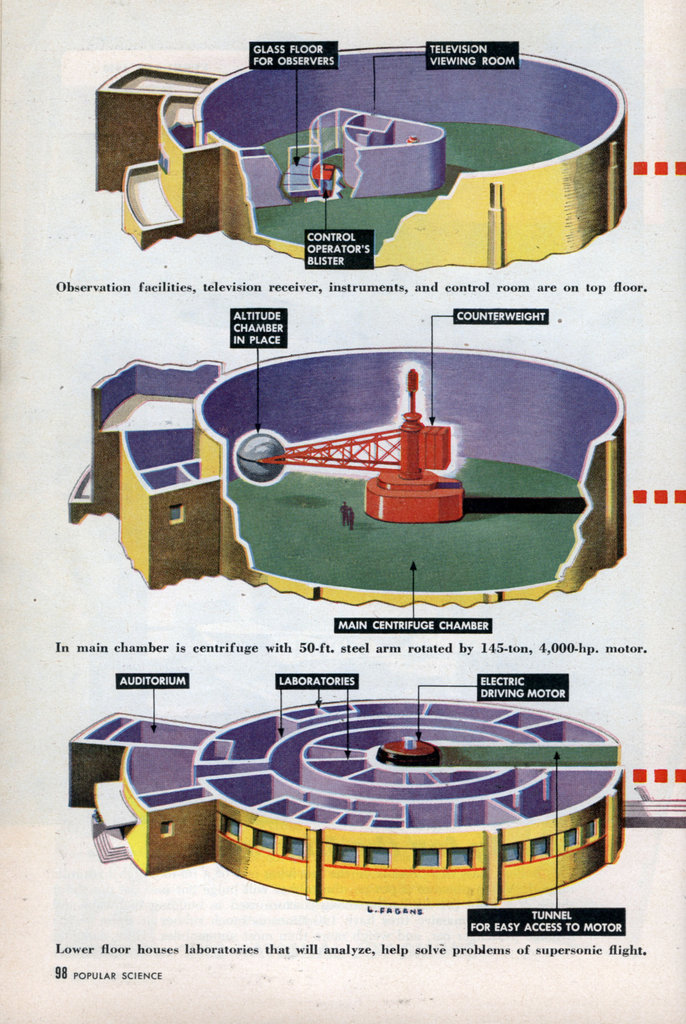 By George B. Waltz, Jr.
Drawings by Lester Fagans

TAKING an all-out ride in the Navy’s newest laboratory “gun” will be like sitting astride a standard aircraft rocket as it starts toward its target. This “gun” is a human centrifuge to end all centrifuges—a giant, high-speed merry-go-round capable of making a man feel like a bullet being shot from a rifle.

Scientists will use the machine to learn a good many new facts about the physiological and psychological effects of high speeds and sudden changes in speed. They will do it by subjecting pilots to tremendous forces of acceleration and deceleration. As pilots and airplane manufacturers strive to bore deeper and deeper into the “no man’s land” of supersonic and super-supersonic flight, new problems are arising. It is not now so much a question of whether the plane will hold together as: “Will the pilot?”

What happens inside the human body when it is suddenly accelerated or decelerated? What happens if, while shooting through the air at 1,000 m.p.h., the direction is quickly changed as in a pull-out From a dive or in a sharp turn? What effects does high altitude, with its reduced oxygen, have on a pilot’s ability to withstand those forces? How will airplane instruments and equipment stand up?

It is to help dig out the answers to those questions and many other supersonic puzzlers that the Special Devices Center of the Office of Naval Research is building this $2,500,000 centrifuge-the world’s biggest and best equipped. It will be large enough and spin fast enough to subject anything placed in its test cockpit to acceleration rates as high as 10 G a second (the normal force of gravity is 1 G, or the normal weight of a person or object). It will be possible to develop accelerations as high as 40 G, just about twice the maximum G force developed by any existing centrifuge. Such high G shots are not contemplated, however, for tests on human beings.

Housed in a smoothly modern, 130-foot-diameter, circular building near Johnsville, Pa., the new G-gun will have a 50-foot steel arm whirled by a 145-ton, 4,000-hp. electric motor. Mounted at the outer end in multiple gimbals like the flywheel of a toy gyroscope, will be the test cockpit or gondola.

A decompression chamber, a hollow sphere that clamps over the entire gimbal mounting with its cockpit, has been designed. With the chamber in place, air will be pumped out until the test subject is not only exposed to the G-forces of acceleration and deceleration, but to altitude conditions as high as 60,000 feet.

The two-way gimbal system (a last-minute engineering change from the original triple-gimbal design illustrated on p. 99) is one of the most important features of. the new centrifuge. Electric motors at the axes of the gimbal mountings will automatically keep the test cockpit in such a position as to eliminate most of the unwanted effects of acceleration, regardless of the speed of rotation.

Seated in his observation blister hung from the ceiling, the centrifuge operator will have full control of the speed and gyrations of the test cockpit. This is made possible by the motor-operated gimbal mounting. An electronic brain will control the speed of the main motor and its giant arm with hairline accuracy. All the operator will have to do is set the controls for the accelerations he desires prior to a test run, and the electronic circuit will take care of the rest. So quick and smooth will be the action of the drive motor that the test cockpit can be shot from a standstill to its top speed of 174 m.p.h., (40 Gs) in less than seven seconds!

Observers will be able to watch the man being tested at all times through the eye of a television camera mounted in the cockpit. Automatic recordings also will be made of such things as the test subject’s blood pressure, his pulse, the amount of oxygen in his blood, and his brain waves. Although the current design does not include the highspeed X-ray motion picture camera indicated in the artist’s drawing on p. 99, provision has been made for its future installation; this would give observers a running record of what happens to the man’s insides.

The building housing the centrifuge will be a complete aeromedical experimental station. On the main floor, directly under the centrifuge, will be a darkroom, a surgery, and physiological, clinical, and biochemical laboratories. From these laboratories may come the answers that will help beat the problems of supersonic flight.

Getting the Pilot Out One of the problems plaguing aeromedical experts as well as supersonic plane designers, is that of getting the pilot safely out of one of these high-speed craft should it develop trouble at high altitudes. Here it is a matter of violent G forces in the form of quick deceleration. The pilot must be safely slowed down from the speed of sound to a speed that permits a saf6 parachute opening and descent.

Until not so long ago, a pilot with a disabled airplane on his hands simply pulled back hi$. cockpit canopy, bailed out over the side, counted 10 to get himself safely clear of the plane, and pulled the rip cord. But when plane speeds increased materially during the war, a powder charge was provided to blow the canopy free and make the pilot’s escape easier. Next, with even greater speeds, came the Navy’s record-breaking, jet-propelled Skystreak with its detachable nose (PS., Mar. ’47, p. 93) and the ejectable seat that catapults both seat and pilot out of the cockpit.

In planes flying in the transonic speed zone at high altitudes, however, neither the jettisonable nose nor the ejectable seat would be completely effective. Without some overall protection against both the sudden brick-wall impact of a 700- to 800-m.p.h. slip- stream, and the lack of sufficient oxygen, a pilot might be badly injured, if not killed, before he could open his parachute.

One answer, Navy engineers feel, is to keep the pilot right where he is, securely strapped and braced in his cockpit, detach the whole as a unit or protective capsule from the rest of the plane, and then slow it down and lower it by means of a modified ribbon-type parachute. A ribbon parachute would be used rather than the conventional full canopy type to ease the cockpit to a slow speed instead of snapping it to a quickly decelerated stop.

In one pilot-escape device being considered by experts at the Navy Material Center in Philadelphia, the pilot of a disabled highspeed aircraft would simply hit a convenient red-knobbed button with his hand. With a loud bang, the plane’s entire cockpit—complete with sealed canopy, oxygen supply, and pilot—would be shot up out of the plane. (See illustration on page 100.) Finally, after the speed of the cockpit had been reduced, a large parachute would auto- matically billow open and lower the cockpit to earth or to a safe altitude where the pilot could bail out and use his own ‘chute.

A second design uses a jettisonable nose like the Skystreak, but develops the idea further. Its front or nose section also drops off, but instead of being open at the rear and merely providing a quick means of escape or bail-out, it is a closed capsule and has its own automatic parachute. A second automatically released ‘chute is attached to the main portion of the fuselage and slows it down, holding it back to prevent a collision with the detached nose.

In a third version of the Navy’s escape technique, a button touched by the pilot would fire explosive charges to split the airplane into three separate parts—nose, cockpit, and main fuselage with wings. Once free of the rest of the plane, the cockpit would drift to earth under its own automatically opened ‘chute. As with the catapulted cockpit, the pilot could ride it to earth or bail out and use his own ‘chute when he reached a safe altitude.