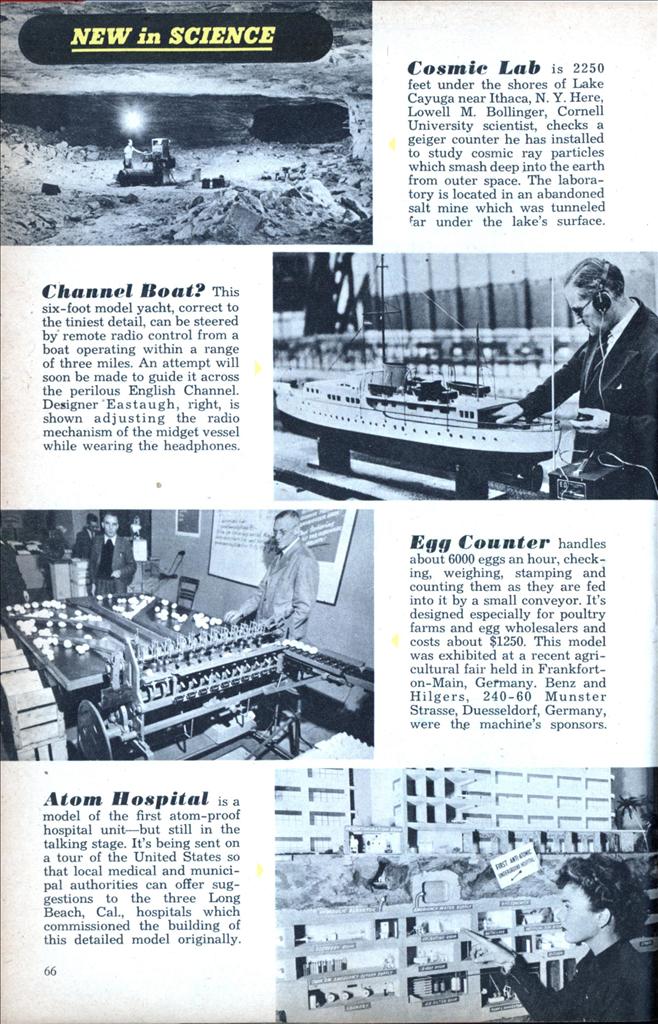 Cosmic Lab is 2250 feet under the shores of Lake Cayuga near Ithaca, N.Y. Here, Lowell M. Bollinger, Cornell University scientist, checks a geiger counter he has installed to study cosmic ray particles which smash deep into the earth from outer space. The laboratory is located in an abandoned salt mine which was tunneled Far under the lake’s surface.

Channel Ho at? This six-foot model yacht, correct to the tiniest detail, can be steered by remote radio control from a boat operating within a range of three miles. An attempt will soon be made to guide it across the perilous English Channel. Designer Eastaugh, right, is shown adjusting the radio mechanism of the midget vessel while wearing the headphones.

Egg Counter handles about 6000 eggs an hour, checking, weighing, stamping and counting them as they are fed into it by a small conveyor. It’s designed especially for poultry farms and egg wholesalers and costs about $1250. This model was exhibited at a recent agricultural fair held in Frankfort-on-Main, Germany. Benz and Hilgers, 240-60 Munster Strasse, Duesseldorf, Germany, were the machine’s sponsors.

Atom Hospital is a model of the first atom-proof hospital unit—but still in the talking stage. It’s being sent on a tour of the United States so that local medical and municipal authorities can offer suggestions to the three Long Beach, Cal., hospitals which commissioned the building of this detailed model originally.

Dash it all! if you think your dashboard is cluttered, take a look at this one in Shell Oil Company’s jet research plane. The center panel holds conventional twin-engine instruments while the jet instruments are right center. At far right is an engine-analyzer oscilloscope with controls below it. Other dials are analytical and recording.

Good Skate! Here’s a novel pair of roller skates which can be converted into ice skates when the cold season sets in. Instead of the usual four wheels, these skates have three rollers in a straight line. It makes roller skating more like ice skating, too. Then, in the winter, the wheels can be replaced with steel blades. Manufactured by Carl Schmidt and Sohn, Westphalen, Germany.

Citrus X-Ray does a fast and accurate job of separating frost-damaged citrus fruit from healthy oranges and grapefruits grown in not-always-so-sunny California. Here, a subcommittee of the Sunkist Managers Club inspects the ingenious machine invented by H. D. Loop. He claims the device handles three times as much fruit as older machines and eliminates the possibility of human error.

Roach Portrait is made by Arnold Mallis, entomologist for Gulf research laboratories. Using a Zeiss Contax with copying attachment, right, the result is a startling shot of a seemingly mammoth creature with a heavily armored body, far right. Picture was taken during successful research with new insecticide which uses Chlordane.