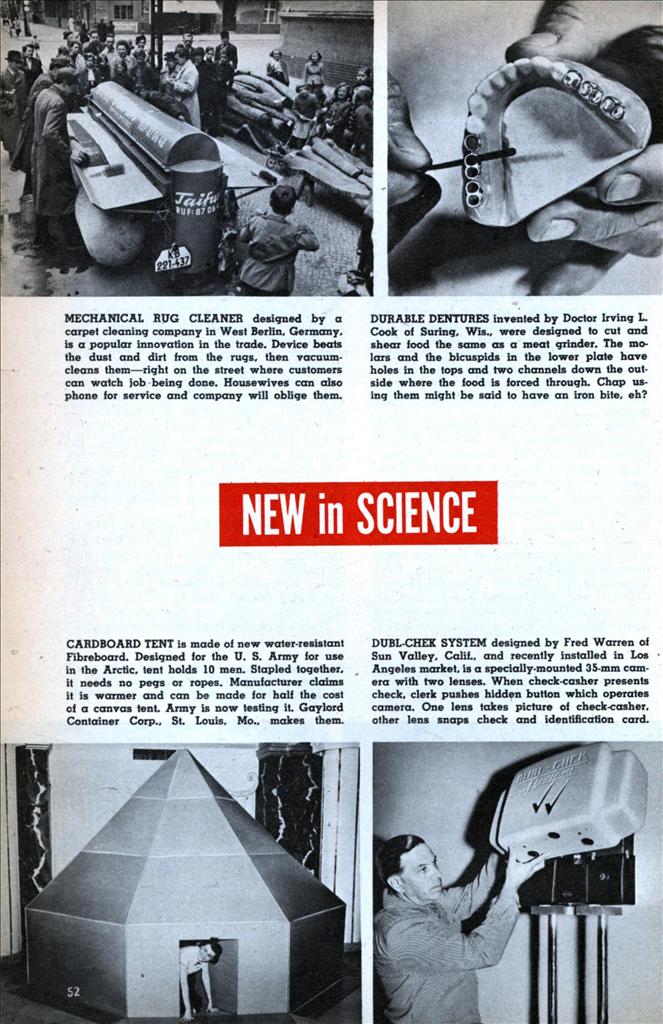 MECHANICAL RUG CLEANER designed by a carpet cleaning company in West Berlin, Germany, is a popular innovation in the trade. Device beats the dust and dirt from the rugs, then vacuum-cleans them—right on the street where customers can watch job being done. Housewives can also phone for service and company will oblige them.

DURABLE DENTURES invented by Doctor Irving L. Cook of Suring, Wis., were designed to cut and shear food the same as a meat grinder. The molars and the bicuspids in the lower plate have holes in the tops and two channels down the outside where the food is forced through. Chap using them might be said to have an iron bite, eh?

CARDBOARD TENT is made of new water-resistant Fibreboard. Designed for the U. S. Army for use in the Arctic, tent holds 10 men. Stapled together, it needs no pegs or ropes. Manufacturer claims it is warmer and can be made for half the cost of a canvas tent. Army is now testing it. Gaylord Container Corp., St. Louis, Mo., makes them.

SURVIVAL SUIT for victims picked up by lifeboats after being subjected to severe exposure raises body’s temperature in very short time. Rubberised suit is extremely light works on principle of air insulation. It is inflated before use and artificial respiration can be applied to man in it. The exposure bag is now being tested in England.

FLEA TRIPLANE may soon be on market in a build it-yourself kit Inventor George Frisbie of De Pere, Wis., has test flown it under CAA supervision but still has several tests to pass before he gets federal approval to market it. The Flea is 15 feet long and has a 20-foot wingspan. Craft has a top speed of approximately 100 mph..

STIRRUP LIGHT for mounted policemen in Stuttgart Germany, enables lawmen to obey the law which requires that all night riders carry lights. Local constabulary solved the problem by fixing a modified flashlight to their stirrups. The unique device casts a white light to the front of the rider and red one to the rear making him clearly visible.

TV DETECTIVE, Earl Clark, manager of the Alpha Beta market in Pasadena. Calif., watches unobserved three TV sets in his office which enable him to spot shoplifters on screens. Images are transmitted from three cameras installed in store, each independently controlled by device at side of set Camera rotates 360 degrees horizontally, 45 degrees downward to floor.