Modern Mechanix
Issue: May, 1930
Posted in: Aviation
Tags: airships
3 Comments on New Midget Scouts of the Air (May, 1930)

“From then on I was too consarned cold to feel anything very much.”
I thought consarned was a typo, but it would have been weird since the correct replacement would have been “consumed by” or “concerned with the”. Turns out it means: confounded; damned. 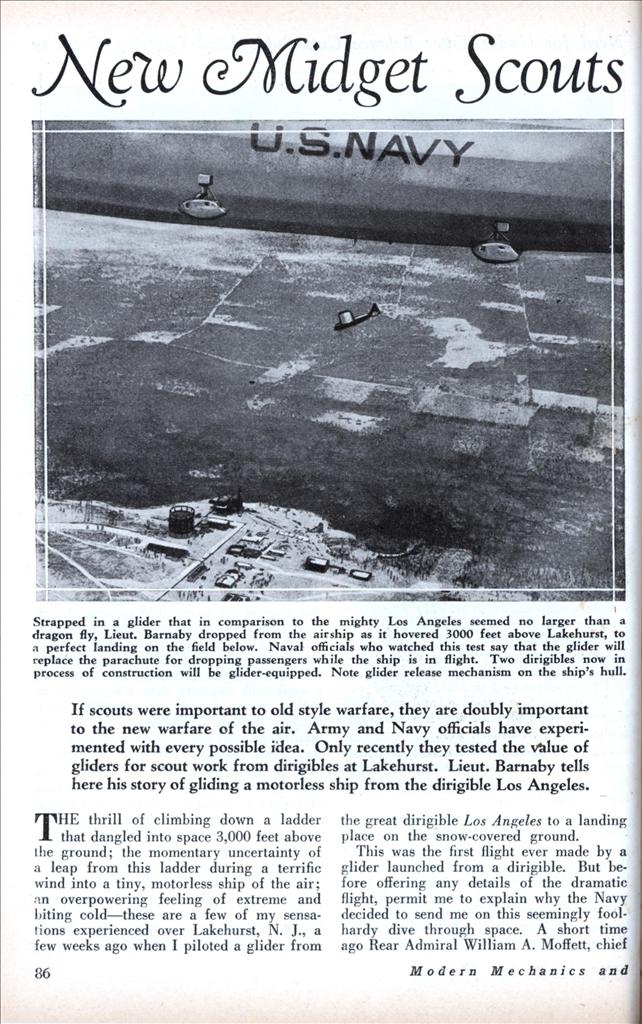 New Midget Scouts of the Air

by Lieut. RALPH S. BARNABY, U.S.N. First Man to Pilot a Glider from a Dirigible

If scouts were important to old style warfare, they are doubly important to the new warfare of the air. Army and Navy officials have experimented with every possible idea. Only recently they tested the value of gliders for scout work from dirigibles at Lakehurst. Lieut. Barnaby tells here his story of gliding a motorless ship from the dirigible Los Angeles.

THE thrill of climbing down a ladder that dangled into space 3,000 feet above I he ground; the momentary uncertainty of a leap from this ladder during a terrific wind into a tiny, motorless ship of the air; an overpowering feeling of extreme and biting cold—these are a few of my sensations experienced over Lakehurst, N. J., a few weeks ago when I piloted a glider from the great dirigible Los Angeles to a landing place on the snow-covered ground.

This was the first flight ever made by a glider launched from a dirigible. But before offering any details of the dramatic flight, permit me to explain why the Navy decided to send me on this seemingly fool- I hardy dive through space. A short time ago Rear Admiral William A. Moffett, chief of the Bureau of Naval Aeronautics, called me into his Washington office. He voiced the opinion of other Navy officials in expressing a wish for an immediate and thorough test to find out whether there was a genuine practical importance in using the glider, in conjunction with airships, for emergency landing purposes; and also, in time of war, to carry men and munitions to areas inaccessible by airplane and dirigible. The point was brought out that probably the glider, being motorless, could serve in this instance more advantageously than the other vessels of the air, since it could land without making the slightest warning noise to the enemy.

Furthermore, it was emphasized that it might be deemed advisable sometimes to send down an officer, via the glider method, to supervise and assemble landing parties in an unknown or little known territory.

In the past one of the greatest hazards of large dirigibles has been the ever-present danger of attempting a landing at points where no prepared landing field was at hand. Of course, parachutes have been used in this connection so as to send down a supervising officer, but this procedure is not particularly practicable since the pilot of the ‘chute is more or less at the mercy of the winds; whereas in a glider he can direct his landing to the spot he chooses. He has complete control of the situation since the controls of a glider are identical with those of an airplane, so that even an inexperienced officer, if he be anything of an airplane pilot, could effect a landing if the emergency arose.

After slightly over two weeks’ preparation for our novel flight, all was in readiness at Lakehurst. The ground was covered with a liberal coating of snow, the air was biting cold, and a keen wind chilled me considerably even though I was fairly warmly dressed in my regulation blue service uniform, with a sweat shirt underneath and a wind breaker on top. I wore two pairs of socks and a helmet, and, of course, strapped a parachute around me in case anything went wrong.

Just a word about the type of glider used. Made especially for our Navy in Germany, it is the only one of its kind in America, has a wing span of 30 feet, and weighs a trifle over 200 pounds, just about 60 pounds beyond my own weight.

Hung from a bar like a trapeze under the keel of the dirigible, the glider could be released readily by a simple movement either on my part or that of a member of the Los Angeles’ crew. But more of that later.

Certainly our flying formation had something of pomp and ceremony about it. Promptly at 10:45 in the morning the great dirigible, containing a contingent of 47 officers and men, all riding in the cabin, took off. She was flanked by the Navy blimps J-3 and J-4, and the Navy’s all-metal dirigible, ZMC-2. Flying in regular formation, this fleet remained in the vicinity of the air station during the entire experimental flight.

At the outset I also was stationed in the cabin with the others. But by 11:15 o’clock I noted that we had gained our carefully planned altitude of 3,000 feet. Whereupon I walked across the keel of the dirigible and dropped down through a hatchway to which was attached a stiff metal ladder leading to the glider. Without trouble I managed to get down about three-quarters of the way down this ladder when I suddenly noticed that it did not quite reach the glider, being about two feet short. Moreover, a stiff wind sprang up, making the glider sway considerably to one side. There was but one thing to do and that was to jump. This I did, luckily landing on top of the motorless ship. Afterwards one of my friends stationed on the Los Angeles, said that there was a tense moment during which it looked as if I were dancing in mid-air and had lost my footing, and that it finally had appeared as if I had accomplished my destination with not an inch to spare.

Once inside the glider I carefully let myself down into the pilot’s seat, gave a signal and the glider was released in a jiffy. More specifically, the motorless ship was suspended from a cross-bar, close to the Los Angeles amidships. The releasing mechanism, similar in operation to the conventional bomb release gear, was operated by a member of the dirigible crew. My instruments showed that I was descending at the late of 35 m.p.h., fast time for a glider.

Ill no time at all I found myself in position to try landing, so I headed the craft into a series of wide circles over the field, crossing the air station 12 times before finally achieving the landing proper. At 11:38 1 was standing in the center of the field, just 13 minutes after leaving the dirigible.

But to return to my feelings upon leaving the Los Angeles. Right after I had cut loose I realized that the worst was over and that the experiment so carefully planned probably would work to satisfaction. My chief sensation was of immense relief, so far as the next five minutes were concerned. From then on I was too consarned cold to feel anything very much.

Safe on the ground again, my thrills for the day were over. But not those of the spectators. Soon after 12 o’clock the Los Angeles pointed her nose down for landing. But straightway a terrific cross-hangar wind blew up with the sad result that the great dirigible was not locked to her mooring mast until an hour and 35 minutes later. For a time it looked as if the efforts of the entire ground crew would prove to be futile.

Just before the Los Angeles dipped down into reach of her landing crew she narrowly missed collision with a commercial plane which had gone aloft to take pictures of the glider maneuvers. The photographer’s plane was caught in a back-wash of air from the dirigible, and dropped fully 500 feet, almost striking the pride of the Navy’s iighter-than-air ships.

Our test has been acclaimed as highly successful, proving conclusively that gliders have a definite and practical use as aids to airships.