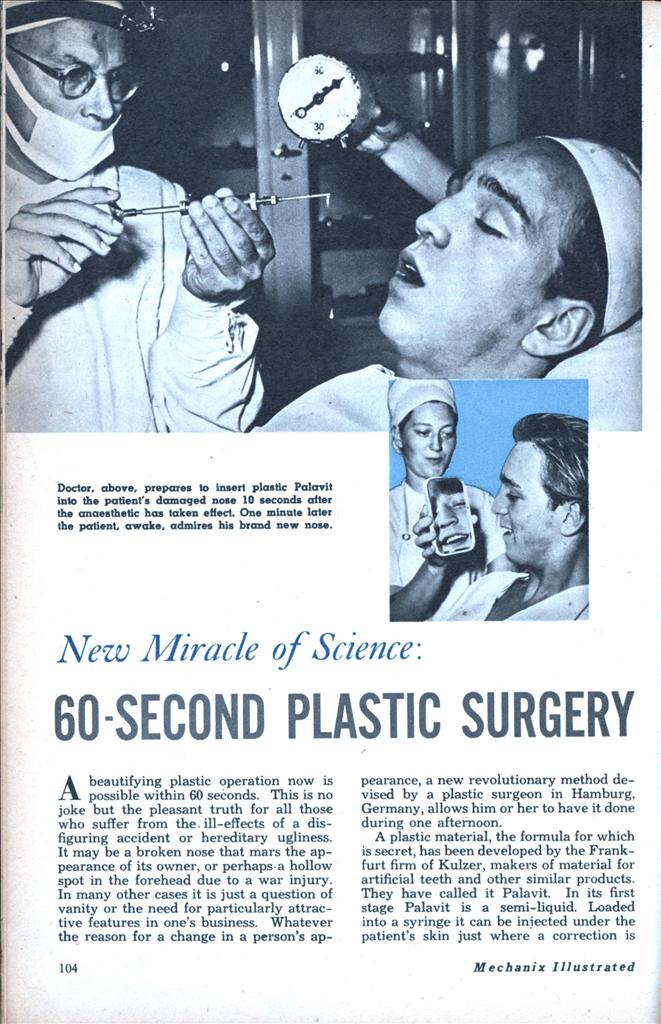 A beautifying plastic operation now is possible within 60 seconds. This is no joke but the pleasant truth for all those who suffer from the. ill-effects of a disfiguring accident or hereditary ugliness. It may be a broken nose that mars the appearance of its owner, or perhaps a hollow spot in the forehead due to a war injury. In many other cases it is just a question of vanity or the need for particularly attractive features in one’s business. Whatever the reason for a change in a person’s appearance, a new revolutionary method devised by a plastic surgeon in Hamburg. Germany, allows him or her to have it done during one afternoon.

A plastic material, the formula for which is secret, has been developed by the Frankfurt firm of Kulzer, makers of material for artificial teeth and other similar products. They have called it Palavit. In its first stage Palavit is a semi-liquid. Loaded into a syringe it can be injected under the patient’s skin just where a correction is needed. Once it is under the skin the doctor still has time to mold the nose— or whatever part of the body it may be— according to the wishes of the patient or his own cosmetic judgment, before the inserted Palavit hardens to bonelike consistency.

It was just by accident that the doctor in Hamburg hit upon the idea to perform a plastic operation in such a bloodless, painless, scarless—and, above all rapid—manner. He had been experimenting with plastic operations during World War II, trying to rectify deformations suffered by soldiers on the field of battle. He had started by inserting plastic splints made of Paladon, the predecessor of Palavit. The little splints that he used were, of course, rather hard, and in order to place them the doctor had to perform some slight surgery on the patient. This worked very nicely but unfortunately always left a few scars, slight but visible. In the meantime Palavit was being developed as an aid to the Paladon splints and when the doctor saw how well and how rapidly the new liquid plastic substance hardened, he immediately got an idea. He would eliminate the splints altogether and inject the Palavit right into that part of the body which needed to be built up.

It took him some years, of course, to improve and refine the method to its present remarkable state, but it was well worth it, as the series of photographs on these two pages readily show. Indeed, it now takes a mere minute to give a person a new face— and an entirely new personality.