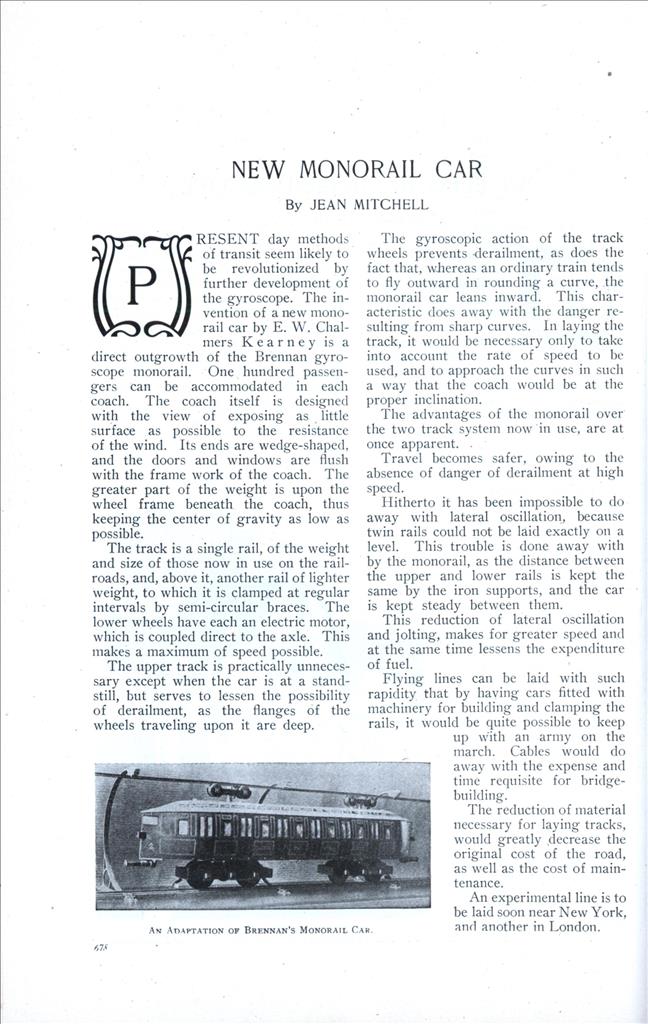 PRESENT day methods of transit seem likely to be revolutionized by further development of the gyroscope. The invention of a new monorail car by E. W. Chalmers Kearney is a direct outgrowth of the Brennan gyroscope monorail. One hundred passengers can be accommodated in each coach. The coach itself is designed with the view of exposing as little surface as possible to the resistance of the wind. Its ends are wedge-shaped, and the doors and windows are flush with the frame work of the coach. The greater part of the weight is upon the wheel frame beneath the coach, thus keeping the center of gravity as low as possible.

The track is a single rail, of the weight and size of those now in use on the railroads, and, above it, another rail of lighter weight, to which it is clamped at regular intervals by semi-circular braces. The lower wheels have each an electric motor, which is coupled direct to the axle. This makes a maximum of speed possible.

The upper track is practically unnecessary except when the car is at a standstill, but serves to lessen the possibility of derailment, as the flanges of the wheels traveling upon it are deep.

The gyroscopic action of the track wheels prevents derailment, as does the fact that, whereas an ordinary train tends to fly outward in rounding a curve, the monorail car leans inward. This characteristic does away with the danger resulting from sharp curves. In laying the track, it would be necessary only to take into account the rate of speed to be used, and to approach the curves in such a way that the coach would be at the proper inclination.

The advantages of the monorail over the two track system now in use, are at once apparent.

Travel becomes safer, owing to the absence of danger of derailment at high speed.

Hitherto it has been impossible to do away with lateral oscillation, because twin rails could not be laid exactly on a level. This trouble is done away with by the monorail, as the distance between the upper and lower rails is kept the same by the iron supports, and the car is kept steady between them.

This reduction of lateral oscillation and jolting, makes for greater speed and at the same time lessens the expenditure of fuel.

Flying lines can be laid with such rapidity that by having cars fitted with machinery for building and clamping the rails, it would be quite possible to keep up with an army on the march. Cables would do away with the expense and time requisite for bridge-building.

The reduction of material necessary for laying tracks, would greatly decrease the original cost of the road, as well as the cost of maintenance.

An experimental line is to be laid soon near New York, and another in London.