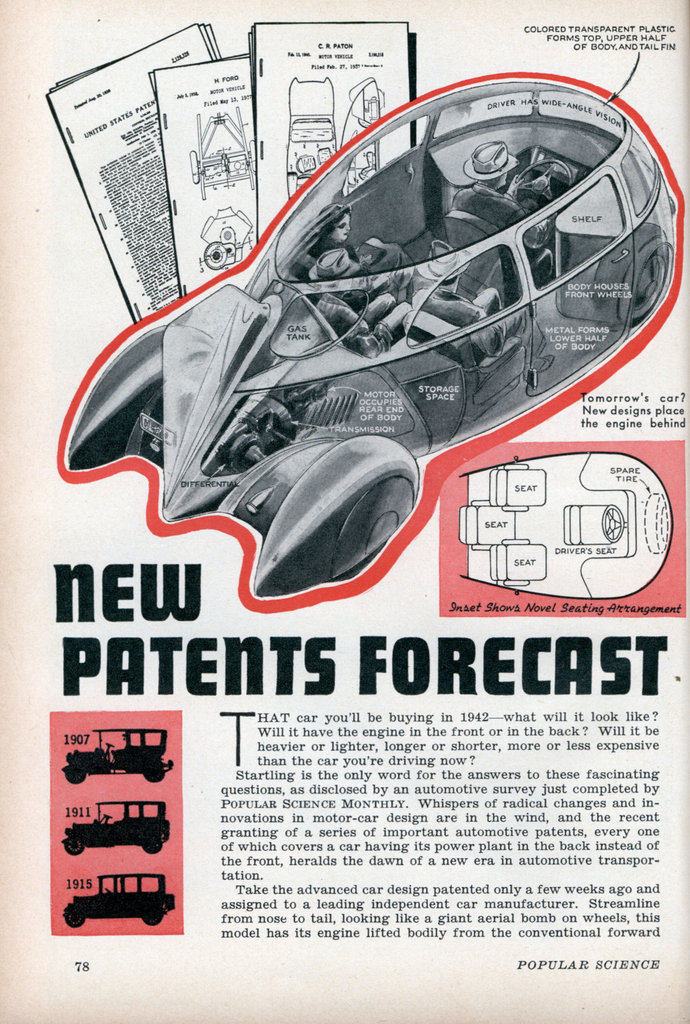 Will it have the engine in the front or in the back ? Will it be heavier or lighter, longer or shorter, more or less expensive

than the car you’re driving now ? Startling is the only word for the answers to these fascinating questions, as disclosed by an automotive survey just completed by Popular Science Monthly. Whispers of radical changes and innovations in motor-car design are in the wind, and the recent granting of a series of important automotive patents, every one of which covers a car having its power plant in the back instead of the front, heralds the dawn of a new era in automotive transportation.

Take the advanced car design patented only a few weeks ago and assigned to a leading independent car manufacturer. Streamline from nose to tail, looking like a giant aerial bomb on wheels, this model has its engine lifted bodily from the conventional forward spot and set down near the rear axle in what would be a 1940 car’s trunk compartment. Although still in normal alignment, the engine and transmission are operated by remote control from the single driver’s seat placed up in the very nose of the car, where the operator can take full advantage of his unlimited field of vision, unhampered by any trace of bulky fenders or engine hood.

Back of the driver, in a compartment that looks as roomy as a small living room, the passengers relax in comfortable upholstered chairs, positioned nearly in the center of the car body, as far as possible from the axles, and at the point where vibration and road shock are at a minimum. Light pours in through a transparent top, and as the teardrop car purrs down the highway no trace of noise or odor from the engine in the rear has any chance of annoying those in the passenger compartment.

The dean of all American motor makers, Henry Ford, is responsible for another recent patent that foreshadows the automobile of the near future. His patent calls for an eight-cylinder engine mounted at the rear of the car transversely, or crosswise, of the frame. As Ford points out in his patent: “It is almost essential that the drive to the axles be transmitted from the center of the frame and, consequently, the engine, when mounted transversely, must be located on one side only of the vehicle. In the past this has caused the car to sag toward the engine side. The applicant has provided a unit wherein the engine flywheel, clutch, and other relatively heavy parts are located on one side of the car with the crank shaft and cylinder block on the other side to thus obtain improved lateral balance for the unit.”

Still a third group of patents, assigned to one of America’s largest automobile manufacturing corporations, brings to light a whole host of astounding new features. As in the cars mentioned above, this model al-so has its motor in the rear, but the power plant is of the radial type, with cylinders mounted in a circle around the central driveshaft like the engines that power the nation’s transport planes. Instead of one large radiator for the cooling system, this car has three small ones, two being placed beneath the front headlamps where water piped forward from the engine is cooled, and a third at the rear which cools the motor when the car is standing still. Ribbons of tough steel connect the driving pedals at the front with the power plant. And the car has no separate chassis or frame, the wheels being attached directly to the sturdy, specially designed steel body.

The power plant in this model is a unit fastened to the body by bolts. When it needs overhauling or adjustment, you loosen a few bolts, support the rear of the body on a jack, and trundle the whole power plant away on the car’s rear wheels. According to reliable reports, this particular car has passed the drawing-board stage and is even now being put through tests on a midwestern automobile proving ground by engineers determined to iron out any kinks or flaws in its operation. Other phases of automobile designing are not lagging behind this mechanical progress. Year-’round air-conditioning is on its way.

New alloys of steel will cut down weight while increasing strength. Painted finishes may give way to brilliantly colored plastics, strong, sturdy, and highly resistant to weather extremes. Developments in “fluid-drive” transmissions indicate that very soon a brake pedal, an accelerator, and a steering wheel will be the only controls that any motorist will have to bother with. Two-way radio installations, transparent body roofs, electrically operated doors, completely effortless steeringâ€”these and other innovations are all in the works.

And what will these dream cars look like? Picturing body styles of the past and the present, one after the other according to the year of their appearance, forms an excellent way of forecasting the body style of the future, according to a statement made recently by Edwin L. Allen, a prominent authority on the subject. Windshields, which in early cars stuck up vertically, have tipped backward to merge with the curving top. Cars through the years have drawn in their boxlike backs to arch forward in a graceful roof line. Meanwhile, the constantly flattening shape of the rear deck has shifted passengers farther and farther toward the front of the body.

Now if this trend of car design continues, it must inevitably lead to the true streamline shape, the teardrop formâ€”wide at the front and tapering back to a point at the rear. The passenger compartment will continue to inch forward, and finally change places with the engine, which will land at the back of the car where many designers have felt it should have been placed when the infant automobile had yet to get its first pair of fenders.

And what do the car owners themselves want in the car of the future ? According to reports of automobile manufacturers, their customers concentrate on three demands: roominess, efficiency, and low price. And that is exactly what the rear-engine streamline car will provide when it rolls off the production line:

A body having the spaciousness, comfort, and quiet of a well-lighted living room, a power plant with the new efficiency of lightweight, frameless rear-engine arrangement, and a lower price brought about by manufacturing savings made possible by a greatly simplified, scientifically engineered automobile.