Well, that looks comfortable. I particularly like the valve handle right in front. 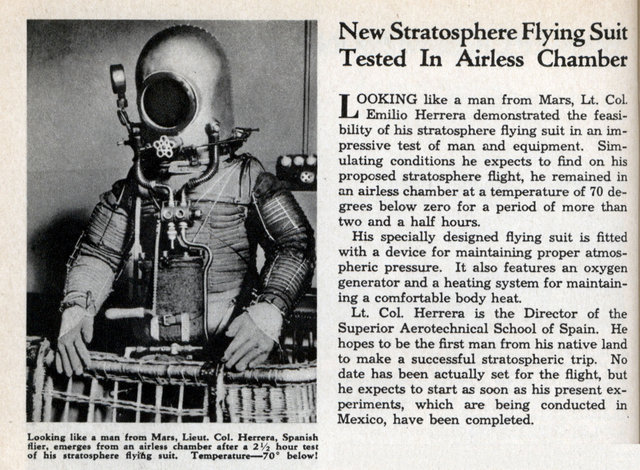 LOOKING like a man from Mars, Lt. Col. Emilio Herrera demonstrated the feasibility of his stratosphere flying suit in an impressive test of man and equipment. Simulating conditions he expects to find on his proposed stratosphere flight, he remained in an airless chamber at a temperature of 70 degrees below zero for a period of more than two and a half hours.

His specially designed flying suit is fitted with a device for maintaining proper atmospheric pressure. It also features an oxygen generator and a heating system for maintaining a comfortable body heat.

Lt. Col. Herrera is the Director of the Superior Aerotechnical School of Spain. He hopes to be the first man from his native land to make a successful stratospheric trip. No date has been actually set for the flight, but he expects to start as soon as his present experiments, which are being conducted in Mexico, have been completed.