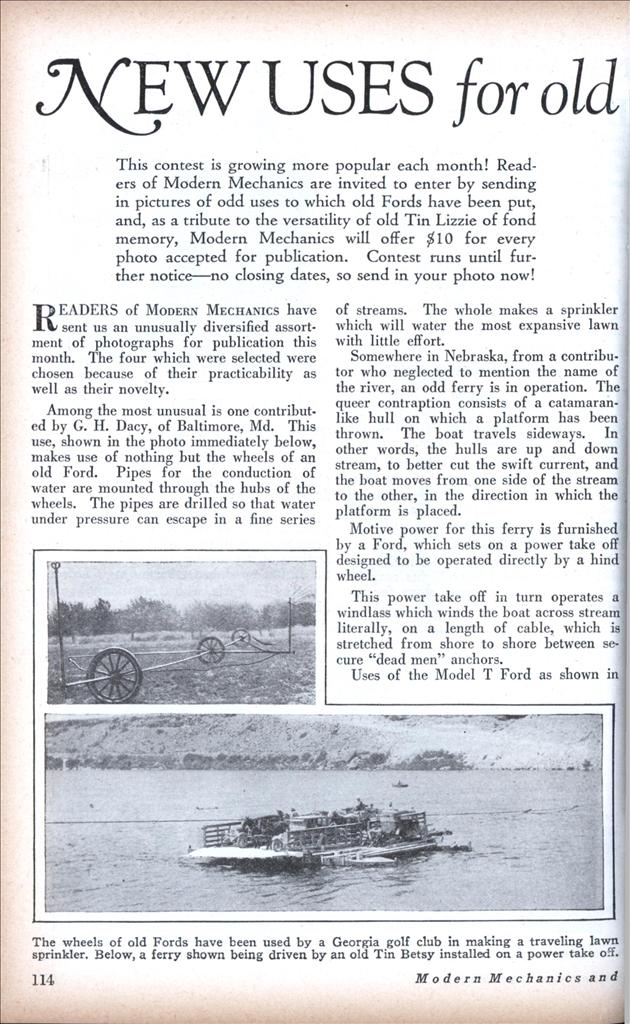 This contest is growing more popular each month! Readers of Modern Mechanics are invited to enter by sending in pictures of odd uses to which old Fords have been put, and, as a tribute to the versatility of old Tin Lizzie of fond memory, Modern Mechanics will offer $10 for every photo accepted for publication. Contest runs until further notice—no closing dates, so send in your photo now!

READERS of Modern Mechanics have sent us an unusually diversified assortment of photographs for publication this month. The four which were selected were chosen because of their practicability as well as their novelty.

Among the most unusual is one contributed by G. H. Dacy, of Baltimore, Md. This use, shown in the photo immediately below, makes use of nothing but the wheels of an old Ford. Pipes for the conduction of water are mounted through the hubs of the wheels. The pipes are drilled so that water under pressure can escape in a fine series of streams. The whole makes a sprinkler which will water the most expansive lawn with little effort.

Somewhere in Nebraska, from a contributor who neglected to mention the name of the river, an odd ferry is in operation. The queer contraption consists of a catamaranlike hull on which a platform has been thrown. The boat travels sideways. In other words, the hulls are up and down stream, to better cut the swift current, and the boat moves from one side of the stream to the other, in the direction in which the platform is placed.

Motive power for this ferry is furnished by a Ford, which sets on a power take off designed to be operated directly by a hind wheel.

This power take off in turn operates a windlass which winds the boat across stream literally, on a length of cable, which is stretched from shore to shore between secure “dead men” anchors.

Uses of the Model T Ford as shown in the picture depicting sawing operations are numerous. Contributions to the contest have been returned where the saw adaptation has been used, as have all other uses which are not new to the editors. However, photographic evidence of a Ford actually sawing wood, though the use was mentioned in the November issue of the magazine, was thought to be of interest and the editors awarded the prize to an Arkansas reader some months ago, holding the photo for publication this month. The particular novelty which was responsible for this particular application of the sawing use being awarded a prize was the obviously improvised carriage, mounting and radiator. This tends to show that a Ford engine only needs a place to run and someone to turn the crank to get goin’! Uses to which the Ford has been put should be different from any that have been published in the magazine to be of any value to the editors of Modern Mechanics.

Most of the new uses in Modern Mechanics contest have shown the Fords sturdily laboring at hard tasks. The use which was contributed by Herbert Photos, Inc., shows an old Ford chassis doing work as an advertising sign in front of one of California’s queer shops. The car was endowed with a special racing body, placed on the lawn in front of the shop, which was a quick, quick-lunch place, and served to impress customers they would be waited on with racing car speed. During the rush hours, the motor would be kept running with cut-out open, and an attendant in the form of a monkey, shown in the photo, played the part of race driver.