Very cool 25 page photo spread of the World’s Fair from a 1965 National Geographic.

Check out the odd assortment of items in the time capsule on page 22 (larger view). Among other things it has a rather clunky looking computer memory module, birth control pills, a pack of cigarettes and a bikini. 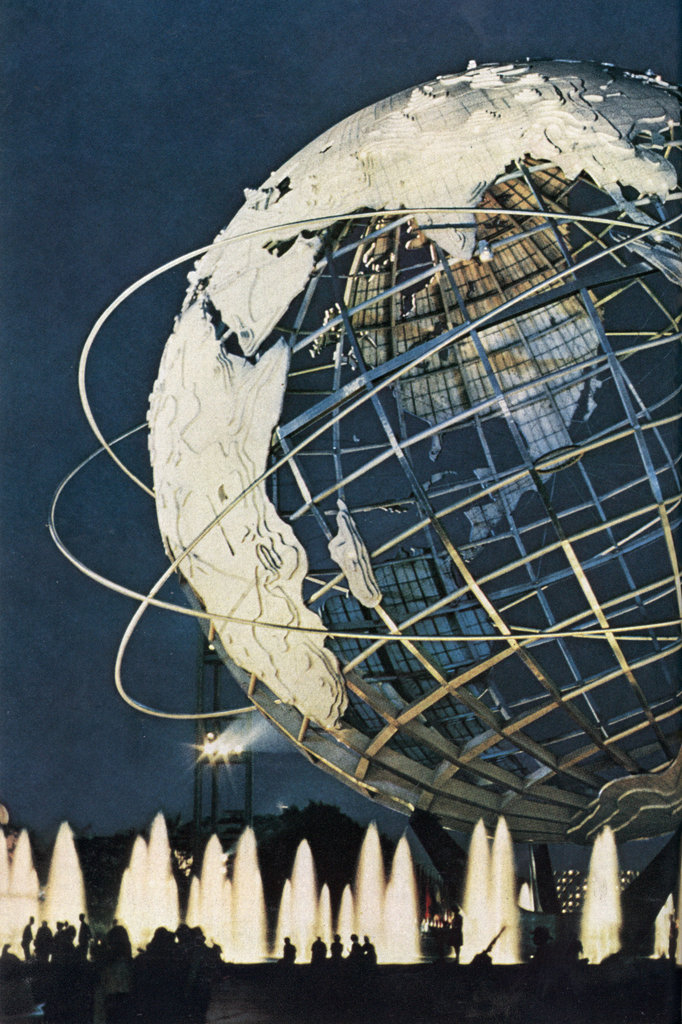 CLASSROOM IN A CARNIVAL. A journey round the world. A look back in time, and a window on the future. A treasure house of religious faiths. A procession of products. And a dream of “Peace through Understanding.”

This is the New York World’s Fair of 1964-1965. Here you can see how atoms collide in the first public demonstration of controlled nuclear fusion, at General Electric. Listen to the rustle of stars as picked up by a radiotele-scope at Ford. Take a journey into space, booked by the Martin Company in the Hall of Science. See how your voice “looks” on TV at the Bell System (page 515).

Sample the sights, sounds, and smells of faraway lands in the pavilions of 66 nations. Admire masterpieces: El Grecos and Picassos at Spain; Michelangelo’s “Pieta” at the Vatican Pavilion.

We met by accident over delectable ham sandwiches in the Danish Pavilion. Dr. Robert Fernie and his wife, from Hutchinson, Kansas, had just seen the “Pieta,” and we discovered a shared reverence for the sculpture. The marble statue of Mary holding the body of her son, the Christ, looked like the finest porcelain in the Jo Mielziner setting of blue drapery and lights. “But the body of Christ is the marvel,” said Dr. Fernie. “The anatomy is perfect; as a doctor, I know.”

See an automobile assembly line in action at Chrysler. Watch the Nation’s population grow at Equitable Life Assurance. Rest in the Garden of Meditation or find inspiration in the music of the Mormon Tabernacle Choir.

Walk down a street in Hong Kong at Coca-Cola. Dine in a tree house on dishes from Africa. Thrill to Polynesian fire-dancers or Mexican flyers (page 512). Sip Irish coffee in the House of the Emerald Isle.

In the entrance court of the Pavilion of Ireland, I paused before a huge map splashed at their counties of origin with the names of Irish families. A mother, father, and two small sons stood by in rapt attention as a voice boomed name after name in the inimitable accent of Ire-land. When the name McCarthy was called, the mother spoke: “Now you’ve heard it, we can move on.” Clearly, the McCarthy family had just passed by.

Pick up the name of a pen pal from the Parker Pen Pavilion; study the history of life on earth and the progress of man in the dioramas at Travelers Insurance; test your driving skill at Socony Mobil.

Catch a new vision of the wonder of life in a film at Johnson’s Wax. Feel at home with the dinosaurs at Sinclair Oil. Savor the flavor of France with the naughty

Some 7,000 visitors file through the RCA Pavilion each day to see themselves on color television (below, left) and hear a backstage briefing on the technological magic that splashes rainbows on their living-room screens. On the same site 26 years ago, RCA introduced black-and-white television to the United States. Official color TV center for the Fair, RCA telecasts news announcements, interviews with visiting dignitaries, highlights of other exhibits, and special eventsâ€”more than 2,000 program hours from April to October. The pavilion also helped reunite families last year by showing lost children on some 200 television sets in buildings throughout the grounds. At the Dupont Pavilion, science joins showmanship (center). Here colorless liquids mixed in flasks shine with intense blue light in a demonstration of chemiluminescenceâ€”the same phenomenon that makes fireflies glow. In Dupont’s production, “Wonderful World of Chemistry,” live actors sing, dance, and talk with life-size motion-picture images on movable screens. One scene shows a live performer blowing out candles on a filmed birthday cake and spraying another actor with frosting. Eight different troupes, working simultaneously in two theaters, present the Dupont show 48 times daily.

Time turns back on the Ford Motor Company’s Magic Skyway. Riding new-model convertibles, whose radios play the script in four languages, spectators thrill to the savage world of prehistory: Life-size

dinosaurs lumber through swamps, crane necks, and fight as if to death. A Walt Disney technique known as Audio-Animatronics gives them sound and movement. Centuries slip by and cave men appear, make fire from the friction of sticks, hunt animals, paint on cave walls, and invent the wheel. Leaping into the future, Ford creates a gleaming Space City and sends the riders sailing above it like astronauts.

General Motors’ Futurama (below) begins and ends in the “near tomorrow. ” Seated in moving sound-equipped lounge chairs, guests fly to the moon. Here a lunar crawler on globular wheels rolls toward a fluted communications center. Other Futurama scenes show man using a year-round harbor in the Antarctic ice, cavorting in an undersea resort hotel, and felling trees in the jungle with a searing laser beam.

“America is never accomplished,” announces the inscription at the entrance to the Federal Pavilion (right). And the huge fiberglass-walled structure, “floating” 18 feet above the ground on four steel columns, offers exhibit after exhibit in proof of a Nation in the turmoil of growth. The theme, “Challenge to Greatness,” acknowledges the problems of the land and shows how they are being met: Urban renewal revitalizes a blighted city; new highway networks speed the ever-increasing flow of traffic. “Voyage to America,” a film, illustrates the contribution of immigrants. For a second film, “The American Journey,” moving grandstands carry passengers through the Nation’s history by means of 120 screens.

Varied as the myriad products of today’s technology, the contents of the Westinghouse Time Capsule will tell our descendants five millenniums hence of changes that have occurred in the fateful 25 years since the original Time Capsule was buried at the close of the 1939 World’s Fair.

Dr. Leonard Carmichael, your Society’s Vice President for Research and Exploration (right), chaired a committee of distinguished scientists, artists, and scholars who selected the capsule’s historic freight. The Bible, a piece of heat shield from a space craft, a National Geographic Atlas of the World in microfilm, freeze-dried food, a bikini bathing suit, and a popular recording by the Beatles comprise a portion of the material that also includes microfilmed writings totaling 20,000,000 words of text.

The gleaming torpedo-shaped 1964 capsule (below) will rest under a granite marker only a few yards away from its 1939 predecessor. An inscription enjoins finders to leave the capsules undisturbed until the full lapse of 5,000 years.

Sea of steel, acre of people

BY noon of a summer’s day the Fair’s four parking lots swarm with cars. As many as 200,000 visitors a day thronged the grounds last year, and officials now brace for similar invasions.

At the IBM Pavilion rust-colored metal trees hold aloft a white egg-shaped dome. The egg is a theater, but a theater without seats. Spectators file into a steep grandstand at ground level. Then this “people wall” ascends into the theater, where rapt audiences watch a 12-minute show projected on 16 separate screens. The theme:

IBM’s ingenious kaleidoscope, a sampling of life and living, lets viewers probe the mind of a racing-car driver speeding at 120 miles an hour, share the problems of scientists gathering weather data throughout the world, watch a football play analyzed by the coach on a blackboard and run by the team, and explore a woman’s mind as she plans the seating of a dinner party. Having witnessed the method in the thought processes of these decision-makers, spectators thus can better understand the methods that “information machines” follow.

The states: pride on parade

New york state’s Tent of Tomorrow, 2,000 tons of laminated fiberglass and steel (right), covers a 130-by-166-foot terrazzo version of a Texaco road map of the Empire State (below). Here an audience gathers for a performance of amateur talent. On the mezzanine, visitors may write a law to be forwarded to Albany, the state capital, for study.

Pavilions of the 20 other states represented at the Fair compose a hymn to the Nation’s diversity. Illinois houses a life-size talking Lincoln. West Virginia’s artisans make banjos one month, quilts the next. Florida stages a porpoise aquacade. At the Wisconsin Pavilion, an angler may fly-cast for trout and see his catch cooked. Oklahoma displays a map on which a toy barge moves along a proposed ship canal leading to the Gulf of Mexico.

At the Maryland Pavilion visitors stroll a wharf, eat crab soup, and watch a model of the Constellation float in a miniature Chesapeake Bay. Montana, the Big Sky Country, shows off a million dollars in gold nuggets. New Jersey hatches chicks and displays the inventions of Thomas A. Edison. Louisiana’s Bourbon Street swings with jazz bands. The swish of hula skirts accompanies guitar and ukulele music at the Hawaii Pavilion.

Minnesota sponsors a restaurant with such dishes as venison and duck. Alaska inhabits an igloo-shaped pavilion and entertains with dances by Eskimos and Indians. Missouri remembers Charles A. Lindbergh with a replica of his plane, The Spirit of St. Louis. New Mexico re-creates an adobe village and fills it with Indian handicraft. And the six New England states, Massachusetts, Connecticut, Rhode Island, Maine, Vermont, and New Hampshire, band together to offer a Country Store, a Village Green, and a Liberty Tree hung with historic documents.

The land and its people stand exposed in the pavilions of these United States. Yet, what does it all mean?

Only what the Fair itself proclaims: that the earth is small and its peoples forever intertwined. Lindbergh flew to France; New York’s law evolved from concepts in Rome; Hawaii draws strength from Polynesian origins; all New England owes a debt to Great Britain. Thus is fashioned the unbreakable chain that binds all mankind.