Science And Mechanics
Issue: Mar, 1936
Posted in: House and Home
Tags: new products
3 Comments on Newest Devices For the General Use (Mar, 1936) 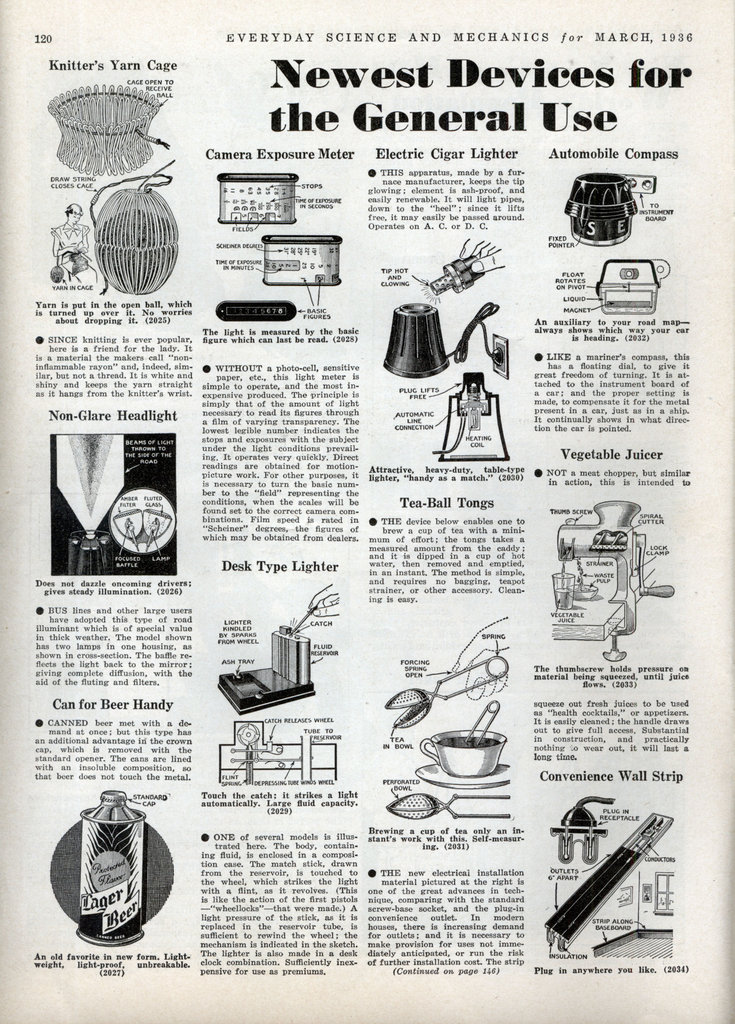 Newest Devices For the General Use

SINCE knitting is ever popular, here is a friend for the lady. It is a material the makers call “non-inflammable rayon” and, indeed, similar, but not a thread. It is white and shiny and keeps the yarn straight as it hangs from the knitter’s wrist.

BUS lines and other large users have adopted this type of road illuminant which is of special value in thick weather. The model shown has two lamps in one housing, as shown in cross-section. The baffle reflects the light back to the mirror; giving complete diffusion, with the aid of the fluting and filters.

Can for Beer Handy.

CANNED beer met with a demand at once; but this type has an additional advantage in the crown cap, which is removed with the standard opener. The cans are lined with an insoluble composition, so that beer does not touch the metal.

WITHOUT a photo-cell, sensitive paper, etc., this light meter is simple to operate, and the most inexpensive produced. The principle is simply that of the amount of light necessary to read its figures through a film of varying transparency. The lowest legible number indicates the stops and exposures with the subject under the light conditions prevailing. It operates very quickly. Direct readings are obtained for motion-picture work. For other purposes, it is necessary to turn the basic number to the “field” representing the conditions, when the scales will be found set to the correct camera combinations. Film speed is rated in “Scheiner” degrees, the figures of which may be obtained from dealers.

ONE of several models is illustrated here. The body, containing fluid, is enclosed in a composition case. The match stick, drawn from the reservoir, is touched to the wheel, which strikes the light with a flint, as it revolves. (This is like the action of the first pistols —”wheellocks”—that were made.) A light pressure of the stick, as it is replaced in the reservoir tube, is sufficient to rewind the wheel; the mechanism is indicated in the sketch. The lighter is also made in a desk clock combination. Sufficiently inexpensive for use as premiums.

THIS apparatus, made by a furnace manufacturer, keeps the tip glowing; element is ash-proof, and easily renewable. It will light pipes, down to the “heel”; since it lifts free, it may easily be passed around. Operates on A. C. or D. C.

THE device below enables one to brew a cup of tea with a minimum of effort; the tongs takes a measured amount from the caddy; and it is dipped in a cup of hot water, then removed and emptied, in an instant. The method is simple, and requires no bagging, teapot strainer, or other accessory. Cleaning is easy.

THE new electrical installation material pictured at the right is one of the great advances in technique, comparing with the standard screw-base socket, and the plug-in convenience outlet. In modern houses, there is increasing demand for outlets; and it is necessary to make provision for uses not immediately anticipated, or run the risk of further installation cost.

LIKE a mariner’s compass, this has a floating dial, to give it great freedom of turning. It is attached to the instrument board of a car; and the proper setting is made, to compensate it for the metal present in a car, just as in a ship. It continually shows in what direction the car is pointed.

NOT a meat chopper, but similar in action, this is intended to squeeze out fresh juices to be used as “health cocktails,” or appetizers. It is easily cleaned; the handle draws out to give full access. Substantial in construction, and practically nothing to wear out, it will last a long time.