Science And Mechanics
Issue: Feb, 1936
Posted in: General
Tags: whats new
8 Comments on Newest Devices for the General Use (Feb, 1936) 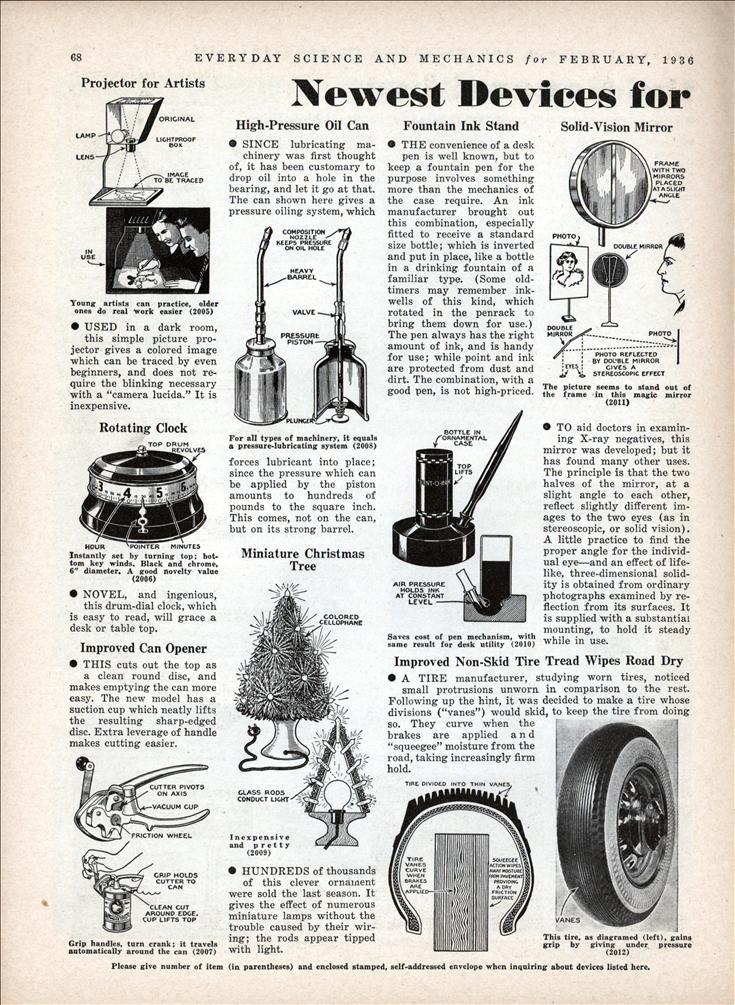 Newest Devices for the General Use

• USED in a dark room, this simple picture projector gives a colored image which can be traced by even beginners, and does not require the blinking necessary with a “camera lucida.” It is inexpensive.

• NOVEL, and ingenious, this drum-dial clock, which is easy to read, will grace a desk or table top.

• THIS cuts out the top as a clean round disc, and makes emptying the can more easy. The new model has a suction cup which neatly lifts the resulting sharp-edged disc. Extra leverage of handle makes cutting easier.

• SINCE lubricating machinery was first thought of, it has been customary to drop oil into a hole in the bearing, and let it go at that. The can shown here gives a pressure oiling system, which forces lubricant into place; since the pressure which can be applied by the piston amounts to hundreds of pounds to the square inch. This comes, not on the can, but on its strong barrel.

• HUNDREDS of thousands of this clever ornament were sold the last season. It gives the effect of numerous miniature lamps without the trouble caused by their wiring; the rods appear tipped with light.

• THE convenience of a desk pen is well known, but to keep a fountain pen for the purpose involves something more than the mechanics of the case require. An ink manufacturer brought out this combination, especially fitted to receive a standard size bottle; which is inverted and put in place, like a bottle in a drinking fountain of a familiar type. (Some old-timers may remember inkwells of this kind, which rotated in the penrack to bring them down for use.) The pen always has the right amount of ink, and is handy for use; while point and ink are protected from dust and dirt. The combination, with a good pen, is not high-priced.

• TO aid doctors in examining X-ray negatives, this mirror was developed; but it has found many other uses. The principle is that the two halves of the mirror, at a slight angle to each other, reflect slightly different images to the two eyes (as in stereoscopic, or solid vision). A little practice to find the proper angle for the individual eye—and an effect of lifelike, three-dimensional solidity is obtained from ordinary photographs examined by reflection from its surfaces. It is supplied with a substantial mounting, to hold it steady while in use.

• A TIRE manufacturer, studying worn tires, noticed small protrusions unworn in comparison to the rest. Following up the hint, it was decided to make a tire whose divisions (“vanes”) would skid, to keep the tire from doing so. They curve when the brakes are applied and “squeegee” moisture from the road, taking increasingly firm hold.

• THE tendency of any round object to roll, when placed on a table, is obvious; if, like an ice pick, it has a sharp point, this may be unsafe. But here is a simple solution—it might work on collar buttons, too. The weighted side stays down, or at most oscillates, when the pick is laid on a table.

• INJURIES from radium and X-ray, which give no warning, are guarded against in an English hospital by this device, which records each day’s “dose.” If a technician appears exposed too much, steps are taken to prevent continuance of the danger.

• A VERY substantial article for the home. It is cast in aluminum, and very light. The metal strainer keeps seeds, etc., out of the glass.

• THIS useful tool is so constructed that it is handy for use, as well as quite safe when being handled. It is, as will be seen, simply an improvement on a familiar gadget, without additional cost of manufacture.

• SINCE the bicycle is now more popular than for years, this should attract many. A little magneto furnishes current enough for lights, and is easily attached to the bike, the wheel giving friction drive.

Future Motor Cars to be Much Lighter

• REDUCED weight, observes an engineer who has made considerable study of motor trends, and economy of fuel obtained thereby, will be marked features of the next few years’ automobile design. That the change to a radically new type of car is prevented only by “the tremendous investment in equipment for manufacturing the present type of car and—if I may say it—a lack of that old-time daring on the part of our automotive industrial leaders,” is asserted by David E. Anderson, of the Bohn Aluminum and Brass Corporation.

He forecasts, not so much higher power and faster cars, in view of the popular agitation for safety, but new, light engines capable of giving 25 to 35 miles to the gallon—”but to build this economical car it will be necessary to scrap entire factory organizations as they are now set up. The independent manufacturers have a good opportunity to stage a comeback by building an up-to-date car.

“For the rear-engine car, which offers the best opportunity for lightness, roominess and economy, the engine will have to be much lighter than it now is. To obtain the desired lightness, aluminum alloys will constitute the major parts of the engine, cylinder blocks and crankcase in place of cast iron. The body must serve also as a frame. Now that we have complete steel construction there is no need for a separation of the frame and body unit. The frame is a relic of the days when cars were assembled from parts purchased from the parts manufacturers.

“In the design of the new engines which, of course, is the focal unit of the new type of transportation, extremely high torque will be required at low speed.

“Our present engines have had no real improvement in ten years. In spite of the fact that speeds have gone up, and power increased by the well-known use of the reamer, the fundamental designs are the same. As a result of increases in bore and

other changes made in the superstructure of the engine, many engines are called upon to deliver more power at higher speeds than they were designed to produce. The result has been a tremendous amount of bearing trouble, forcing the engine manufacturer to resort for bearing linings to harder alloys than are at times good for the health of the crankshafts.

“In the new design, the engine should have a supercharging carburetion system, at least at low speed, in order to efficiently employ the higher compression necessary to produce the required low-speed torque. The supercharger or pressure-carbureting action could taper off as speeds increase.”

• METAL spraying is coming into greater vogue, and serves many purposes better than electroplating. A stick of metal is exposed to the blast of an oxyacetylene flame turned upon it; the metal, in the form of separate atoms, practically a vapor, is blown upon any object, and coats it. Yet the blast is not hot. So, when a young lady visited a museum where the sprayer was demonstrated, she offered her hat. It was held in the metallic blast—and lo! A headpiece shining like a new tin pan on a gatepost, plated with metallic, mirror-like aluminum. Next year, perhaps, she can get it coppered. The same principle, but in a vacuum, where aluminum is “sputtered” electrically, is now used on telescope mirrors to obtain a finer reflecting surface.