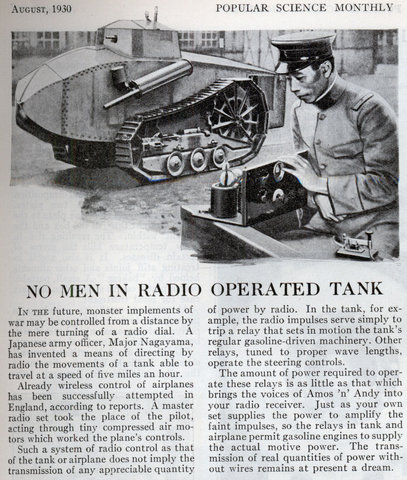 Such a system of radio control as that of the tank or airplane does not imply the transmission of any appreciable quantity of power by radio. In the tank, for example, the radio impulses serve simply to trip a relay that sets in motion the tank’s regular gasoline-driven machinery. Other relays, tuned to proper wave lengths, operate the steering controls.

The amount of power required to operate these relays is as little as that which brings the voices of Amos ‘n’ Andy into your radio receiver. Just as your own set supplies the power to amplify the faint impulses, so the relays in tank and airplane permit gasoline engines to supply the actual motive power. The transmission of real quantities of power without wires remains at present a dream.