Modern Mechanix
Issue: Jun, 1934
Posted in: Aviation
10 Comments on Novel Parachute Plane Is Built to Land in the Back Yard (Jun, 1934)

Novel Parachute Plane Is Built to Land in the Back Yard (Jun, 1934) 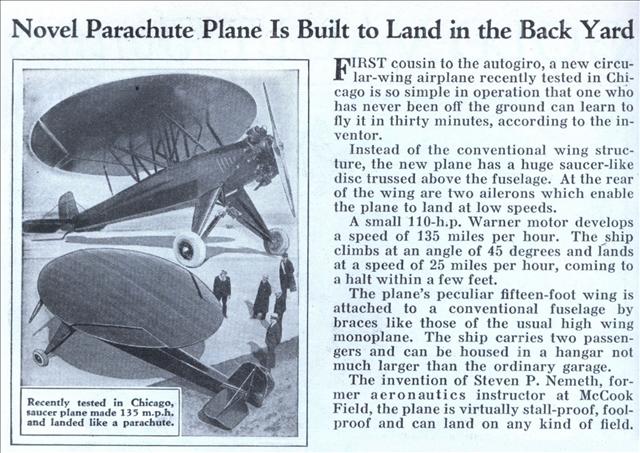 Novel Parachute Plane Is Built to Land in the Back Yard
FIRST cousin to the autogiro, a new circular-wing airplane recently tested in Chicago is so simple in operation that one who has never been off the ground can learn to fly it in thirty minutes, according to the inventor.

Instead of the conventional wing structure, the new plane has a huge saucer-like disc trussed above the fuselage. At the rear of the wing are two ailerons which enable the plane to land at low speeds.

The plane’s peculiar fifteen-foot wing is attached to a conventional fuselage by braces like those of the usual high wing monoplane. The ship carries two passengers and can be housed in a hangar not much larger than the ordinary garage.
The invention of Steven P. Nemeth, former aeronautics instructor at McCook Field, the plane is virtually stall-proof, foolproof and can land on any kind of field.