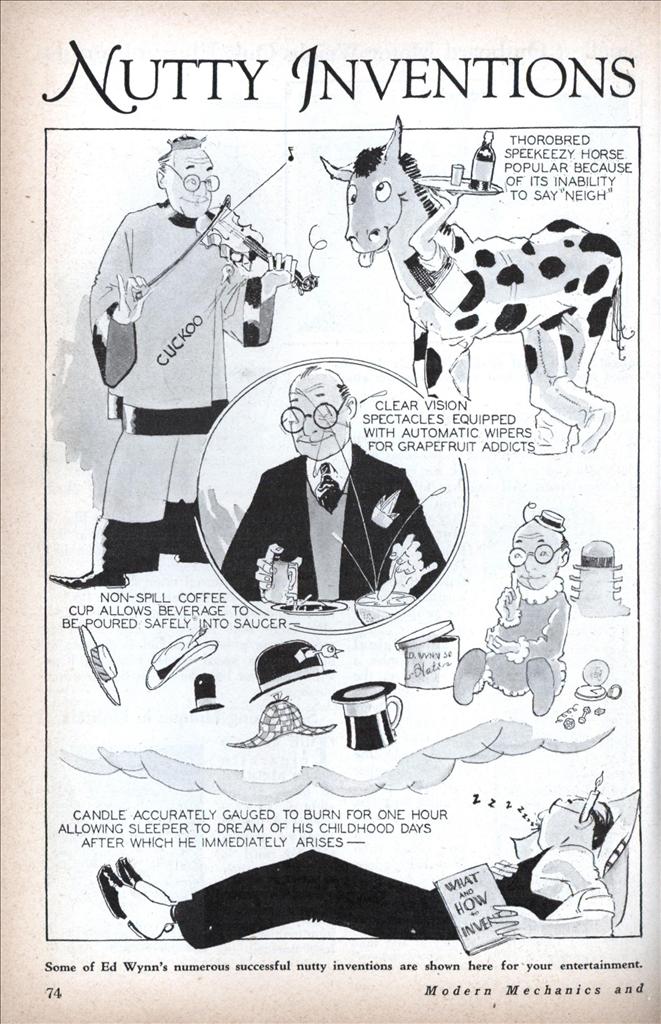 Nutty Inventions to Make You Laugh

ED WYNN Famous Follies Funny Man, confides in ALFRED ALBELLI his secrets of nutty inventing which have made him the stage’s highest paid comedian

PARADOXICAL as it may seem, there is an inventor in America who reaps a fortune every year out of the most foolish contraptions you ever laid your eyes on. Their only usefulness is for a good, full-blasted laugh.

Ed Wynn, the famous comedian, cashes in $150,000 a year by virtue of being “the perfect fool” of the American stage. The sobriquet of “The Perfect Fool”‘ was thrust upon him as he played that particular title role in a musical comedy. But Mr. Wynn has his serious—and idle—hours. These he devotes to experiments in his workshop at his Long Island home.

Already he has patented 110 inventions, covering everything from soup to nuts, and that’s speaking literally. Only once in his career has the department of patents turned down his application for rights and that was on a trick alarm-clock.

“I thought I had a great idea there,”

explained Ed Wynn. “You see the American man was being disturbed by a great problem. Now I’m talking real serious, mind you. I get $3,000 a week from Mr. Florenz Ziegfeld for talking seriously, though any dope knows that I’m not really serious, don’t you know.

“Well, what I started out to say was that the predicament of the everyday mortal surrounded that famous American pastime called “The Nap.” A man desires to take a nap for, let us say, just a half hour. Hmm. He fixes the alarm clock for a half hour. But you know sometimes not even a cannon-ball could budge a napper. The problem is really serious.

“The way I tried to explain it to the Patent Office was this: I have experimented with candles extensively and I have finally succeeded in gauging the length of candles so perfectly that I have one brand which burns for one-half hour, another which burns for one whole hour. I will explain later why it was impossible to use a two-hour candle.

“Now with this one-half hour candle, for instance. Before you fall asleep, stuff this candle gently into the ear, then light the other end, and doze off. It will burn for exactly a half hour and I have found that in every case the subject is roused from slumber when it burns down to the bottom.

“I didn’t get a chance to try that one out on the stage, however. Personally, I don’t happen to be fond of naps while I’m on the stage. But take that piano-bicycle, or if you want to put the horse before the cart, call it a bicycle-piano, which I have been using in Ziegfeld’s ‘Simple Simon’ show.

“That’s my invention, which Mr. Patent Office himself will acknowledge. This machine consists of a piano attached to a bicycle. I sit on the bicycle part and propel a lady, who sits on the piano, about the stage as I serenade her. That always gets me an encore at every performance—and already I have made $10,000 on that one. I love to invent.

“You see, a star can let the writers of the show and the director do all the brain-racking and all that if he wants to, and a lot of ’em get away with murder. But I kind of like to throw in a lot of fool inventions.

“In the last show I was in I think I had a corker, judging, of course, from the thunder of laughs I used to draw with it. I used to come out with a very melancholy mug and play some very sad song on a fiddle. On the last chord, a cuckoo used to pop out of the bottom of it and squeak.

“In my latest show I also played the title role of Simple Simon, just a nice simple guy, full of tricks which I bet make you inventors out front there wonder if I didn’t study higher courses in engineering at some time or other. Take a look at that horse we trot out before you.

“It’s a horse without a name. You’ve seen something like it before. No circus is complete without one. One fellow makes the front part and another gent makes up for the hind hoofs, and it’s their job to coordinate. So far there’s nothing new under the sun about that mule.

“Aha! But how about when I stroll up to this here horse and I says to him, patting him very gently on the flank, ‘Make it a Scotch high,’ and presto! a compartment opens up with a bottle and the rest of the fixings? It’s a fool invention, but Mr. Ziegfeld, the greatest theatrical producer in the world, pays me the highest salary of any comedian on the American stage for just an invention like that.

“A couple of years ago I knocked ’em for a row of Capones out in Chicago when I made public my invention of the laffometer. It was a sensitive and minute instrument which could gauge the extent of your laughter by the vibrations of your body. I could not find anyone in Chicago with a sense of humor, so I didn’t make a nickel on that one.

“Getting down to basic statistics, I’m a Quaker boy, meaning I hail from the city of brotherly love which, in case you have forgotten, is Philadelphia, Pa. My father was a manufacturer of hats, and I guess that’s where I get my ideas for the queer sombreros that I wear.

“If you ask how I happened to rise as a star, I shall ascribe it to my success as the most foolish, though perhaps one of the highest-paid, inventors in this country. Of course, my inventions deal with the lighter side of life. But it’s when they strike home, like any good joke, that they’re best.

“For the soup tenors I evolved a noiseless soup-spoon. Then I got a patent on a tin crumb-snatcher. This was attached to the cuff and prevented the crumbs from falling on the rug and making so much trouble for your hostess. You wouldn’t find these things in the ritziest of restaurants, but you’d be sure to find them in my show. You see, I figure a good star has got to be a good inventor, fool or no fool.

“I don’t know just how you feel about this, but I’m sort of old-fashioned in a way and I like to drink my coffee out of a saucer. So I’ve invented a cup which has a hole on the bottom which is covered by a shutter. This shutter is released by pressing the top of the cup handle. In this way, the coffee flows directly into the saucer without spilling.

“Oh, yes, ‘way back there I promised to tell you why you can’t use a two-hour candle in that invention for regulating naps. It’s simply this: It’s not a nap if it’s two hours long. Anyway, I love inventions.”