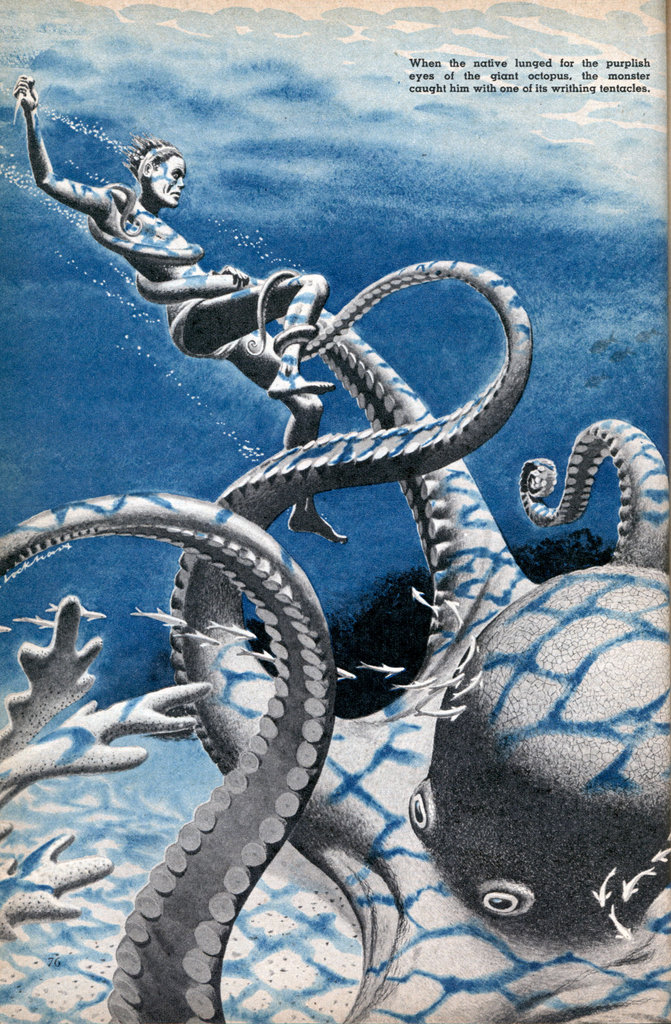 Octopus Wrestling Is My Hobby

Here’s a new kind of deep-sea fishermanâ€”he stalks the cunning, eight-armed king-of-the-ocean in the coral lagoons of the Pacific

“YOU have come to the right place, my son,” said the old man. “On this atoll, the world’s first octopuses were bornâ€”and will one day die, we pray!”

The wizened grandfather of my native guide greeted us with those words when we landed on the tropical beach at Rimaroa during our ocean-wide hunt for octopuses. For, as in ancient days, the Islanders still regard the giant octopus with awe.

They believe him to be the prowling ghost of the wicked god Tumuraifenua, who cast the natives into darkness by holding down the sky with his tentacles. According to the legend, sickness overwhelmed the population and slimy monsters crawled from the deep lagoons to devour entire villages. But for me, wrestling and killing the treacherous octopus was simply a hobby and I had crossed the Pacific to engage in this fascinating pastime.

The first thing I had done upon arriving in Tahiti was to make inquiries for a good octopus hunter. After a week of diligent search, I finally found the best native hunter on the island. His name was Rooâ€” 18 years old, handsome and garbed in a scarlet loincloth. In the shadows of the coral ledges on the seaward wall of the barrier reef, we went in search of the large fes (octopuses). Although a coward in the open, the octopus is a demon of fury when cornered. Roo and I always went in search of the devilish monster armed with strong taveros (spears), twelve feet long and barbed with shafts of iron.

It was difficult to spear the octopus if it were far back in the coral caverns. But Roo had his own system for drawing the creature out. Retreating a short distance from the lair, he would take up his vivo (flute) and play weird tunes upon it the way a Hindu fakir charms a cobra. His piping would soon attract the octopus from its cavernâ€”first the globular, horned head, then the long tentacles with their double row of cup-like suckers. Out of curiosity the octopus would approach within striking distance. In a split second our spears would speed into the revolting mass.

Then, there would be a human-like moan and the water would be clouded with sepia. The long tentacles would flay the surface of the lagoon in savage fury, as the monster tried to rid itself of our spears which were firmly imbedded in its head. If necessary, another spear would be dispatched into the writhing hulk. It took a long time to tire the octopus and we had to hold firmly to the ropes attached to the end of the spears to prevent it from sinking to the bottom of the lagoon where it would be lost to us.

What did we do with the octopus after we killed it? We simply lashed it behind our outrigger canoe, towed it back to the village and presented it to the district chief. And what did the natives do with it? They ate it!

For a long time I could not bring myself to eat fe but one day I placed part of a tentacle in my mouth and became firmly convinced it is a marine delicacy. The tentacles, cubed and served with sauce made from their own juice, are delicious.

One day Roo ridiculed the size and ferocity of the octopuses of Tahiti. “You ought to see the size of the fes at my grandfather’s coral atoll in the Paumotu Group,” he said. My octopus-hunter’s curiosity was up!

So, off we sailed in a trading schooner for the atoll of Rimaroa on the southern fringe of the Paumotu Group, northeast of Tahiti. Early one morning, after many days of sailing under a blazing tropical sun, I saw a faint haze on the horizon ahead. As we sailed toward it with a brisk wind filling our sails, it became more sharply defined. There’s no sight that quickens my pulse like a lonely coral atoll rising from a deep blue sea. Through my binoculars, I could see the natives running to the beach and pushing off across the still lagoon in their outriggers.

A short time later, we were ashore and being greeted by Roo’s grandfather and the 30 natives who lived happily on the remote atoll. The natives carried on only as much trading in pearl shell and copra as was necessary for the simplest life.

It didn’t take us long to get down to octopus hunting. We started making a systematic search of the lagoon and the outer reefs. Extreme caution was maintained on these excursions for the calm lagoon abounded with danger in many ghastly forms. One moment I would be walking unsuspecting on a partly submerged reef stopping occasionally to inspect the coral wall for octopus lairs. Then a sharp cry from Roo would send me scrambling to a high part of the reef just in time to escape from a large vert (poisonous sea-centipede.) It’s an ugly animal equipped with countless legsâ€”a double-edged comb in appearance. A prick from any of its tines would be enough to make you very ill.

Or, a loud shout from Roo would warn me that his sharp eyes had detected a black and grey coral snake. The bite of this vicious reptile sometimes results in death. Or again, a low hiss from Roo would tell me that a nohu was approaching. This treacherous little fish strikes with lightning swiftness, stabbing with its hidden, spiny dorsal fin which ejects a venemous poison.

One day, in the late afternoon, Roo and I discovered a huge monster with 25-foot tentacles in a coral grotto just below the surface of the lagoon. We let out a cry for the natives of the village to assist us. This brute was just too big for two men to handle. With spears, knives and clubs, the entire village arrived to do battle with the giant octopus.

The monster, disturbed by the noise and sensing no escape from its attackers, lashed out menacingly with its long writhing tentacles. As quickly as the grisly arms rose above the surface of the lagoon, the natives slashed them off. In the darkness of the coral cavern, I could see the horrible purplish eyes.

Suddenly, one of the bolder assailants gave a warning shout. Being closer to the monster’s lair, he saw that it was emerging from its retreat to fight us in the open. As it rose to the surface, pulling itself up the reef wall by its partly-severed tentacles, I could see that it was of a reddish hue, with a hideous horned head. Then it started rolling toward us. Although its sepia secretion clouded the water during the first stages of the conflict, I could see that its tentacles were really 25-feet long. Partly cut off by the natives’ knives, they flayed the surface of the lagoon, groping out for the attackers.

The octopus finally realized its hopeless situation and attempted to escape in its crippled condition. But the natives closed in with loud shouts of victory, hacking the tentacles from its body. I came in close, too, and one of the arms closed around the calf of my bare leg. Shivering at the touch, I slashed desperately with my knife, severing the tentacle. When I peeled the grisly fragment away, the skin came with it. For months I carried the red scar of the octopus’ kiss on my leg!

A few final blows of the natives’ spears and knives ended the fife of the repulsive monster. I shall never forget in the last minute of conflict, the moan of fury that the octopus gave when the spears pierced his horned head.

Like to wrestle an octopus? I realize it all sounds like a loathsome sport but it’s really more fun than hunting some poor harmless creature. When you wrestle and kill an octopus, you’re ridding the marine world of a treacherous enemy.

And you’d better watch your step, too. For there’s no such thing as a reckless octopus hunter. You’re either careful or dead.