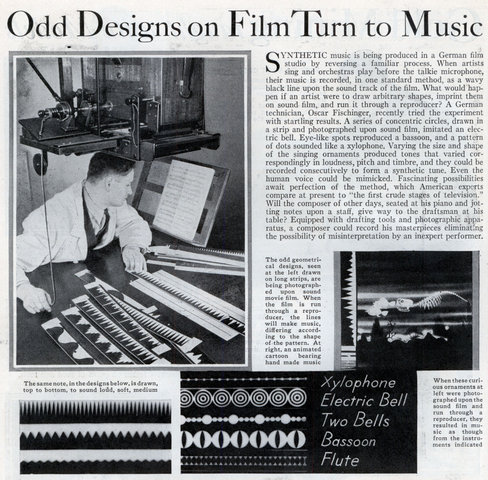 SYNTHETIC music is being produced in a German film studio by reversing a familiar process. When artists sing and orchestras play “before the talkie microphone, their music is recorded, in one standard method, as a wavy black line upon the sound track of the film. What would happen if an artist were to draw arbitrary shapes, imprint them on sound film, and run it through a reproducer? A German technician, Oscar Fischinger, recently tried the experiment with startling results. A series of concentric circles, drawn in a strip and photographed upon sound film, imitated an electric bell. Eye-like spots reproduced a bassoon, and a pattern of dots sounded like a xylophone. Varying the size and shape of the singing ornaments produced tones that varied correspondingly in loudness, pitch and timbre, and they could be recorded consecutively to form a synthetic tune. Even the human voice could be mimicked. Fascinating possibilities await perfection of the method, which American experts compare at present to “the first crude stages of television.” Will the composer of other days, seated at his piano and jotting notes upon a staff, give way to the draftsman at his table? Equipped with drafting tools and photographic apparatus, a composer could record his masterpieces eliminating the possibility of misinterpretation by an inexpert performer.